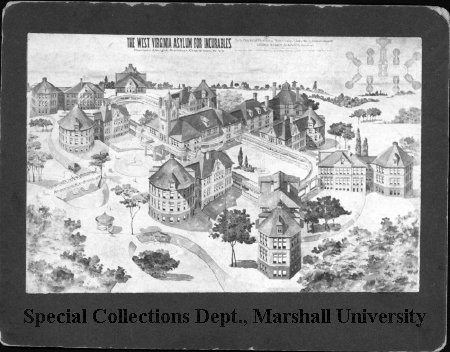 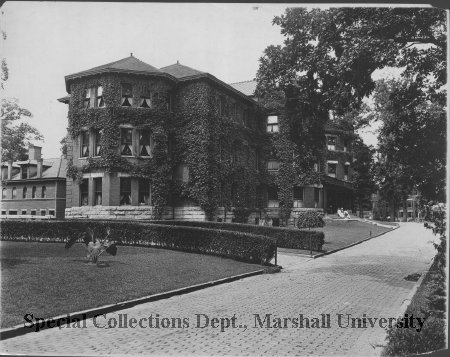 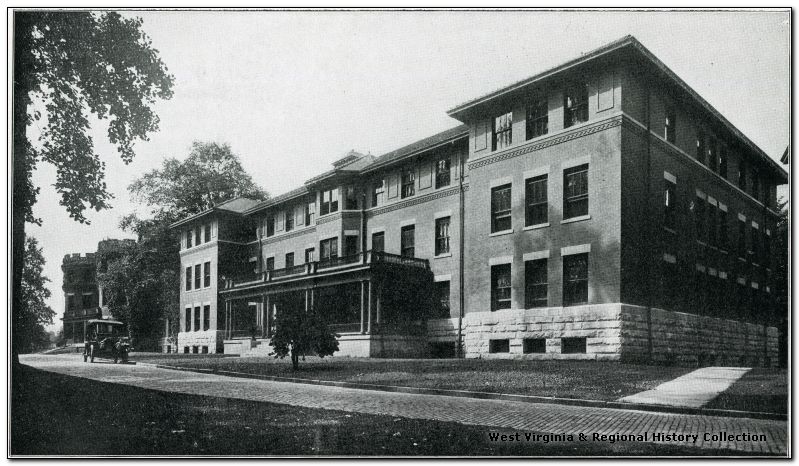 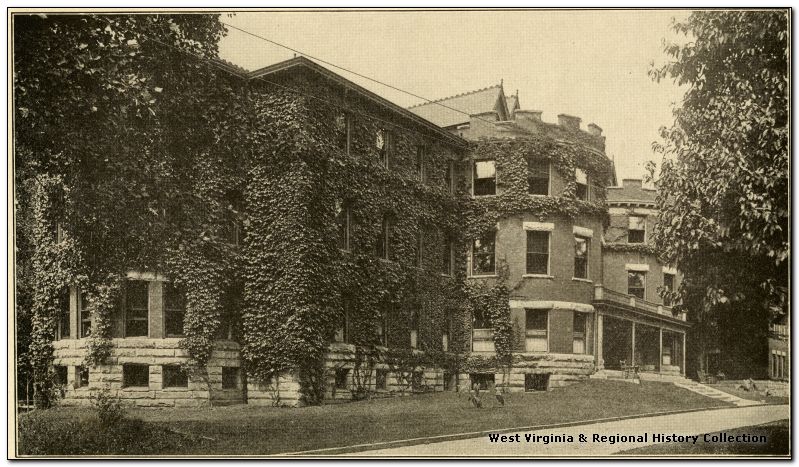 Entrance to the hospital grounds, 1912 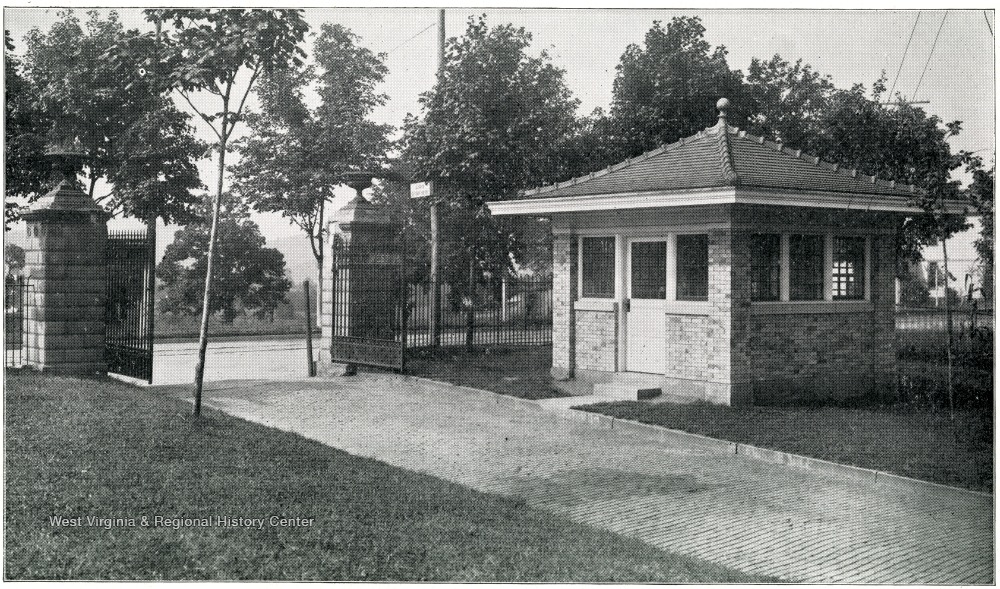 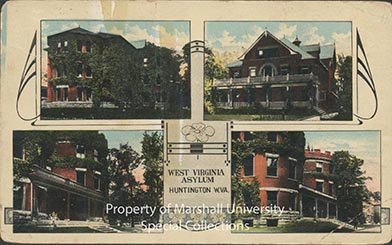 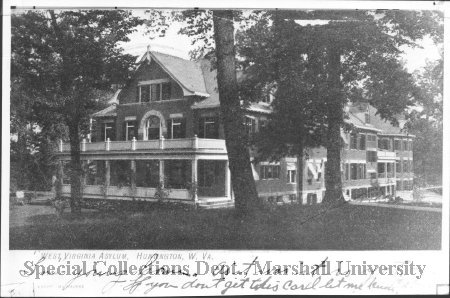 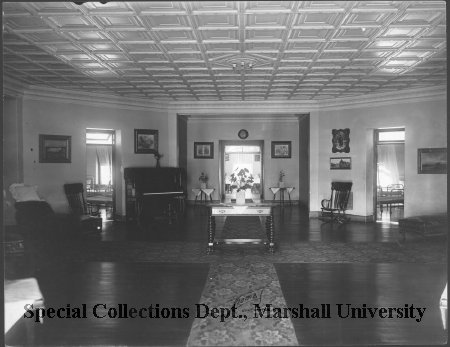 Driveway of the hospital, 1916 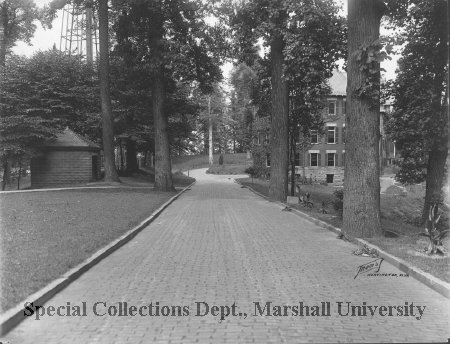 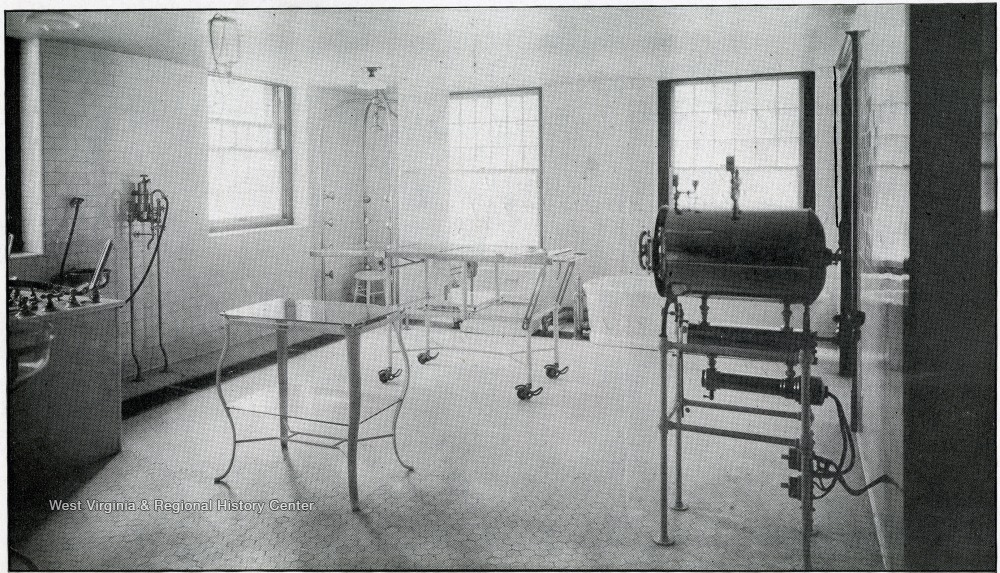 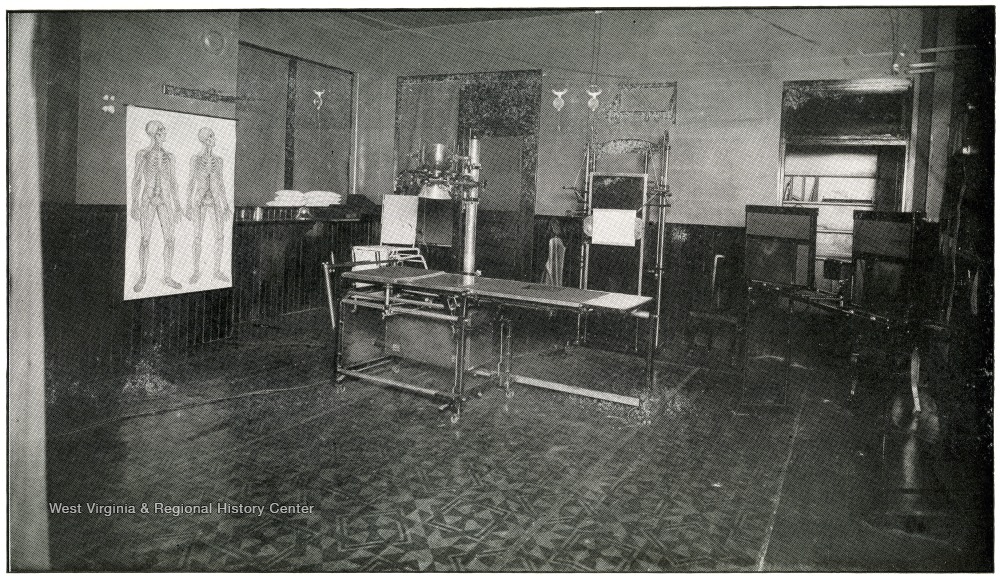 Home for nurses and employees, 1920 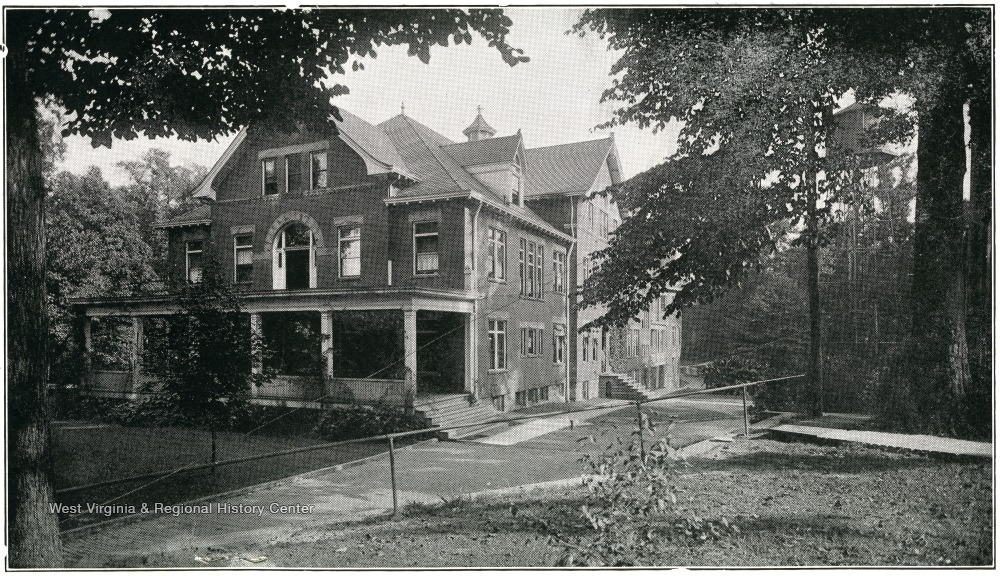 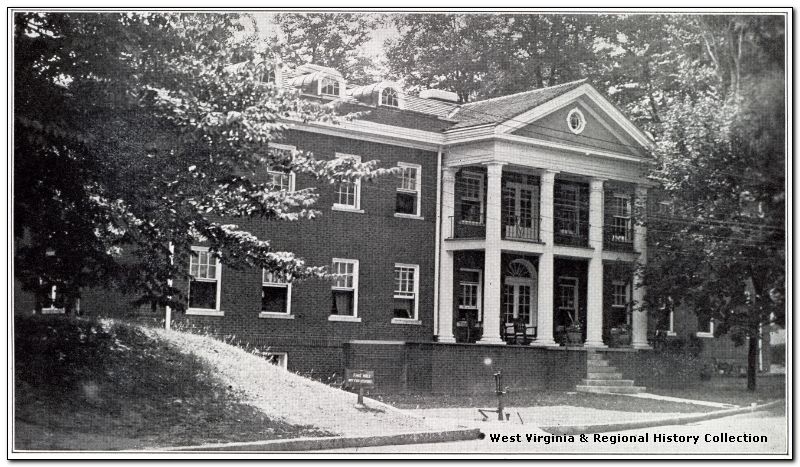 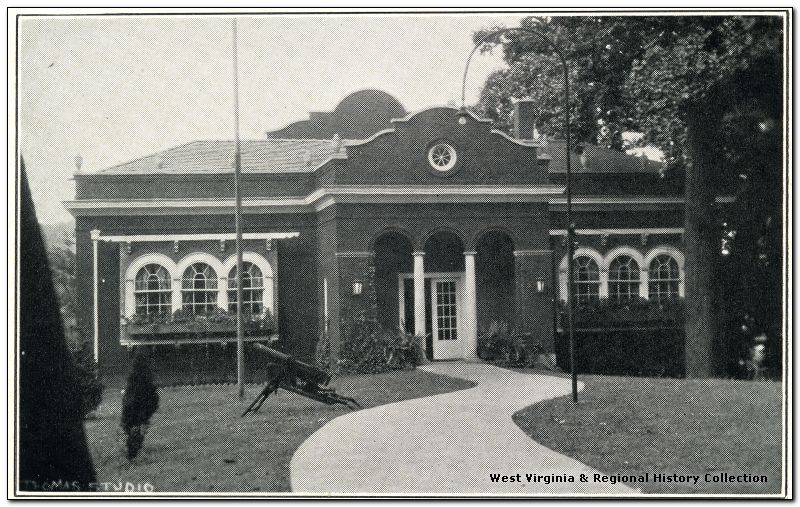 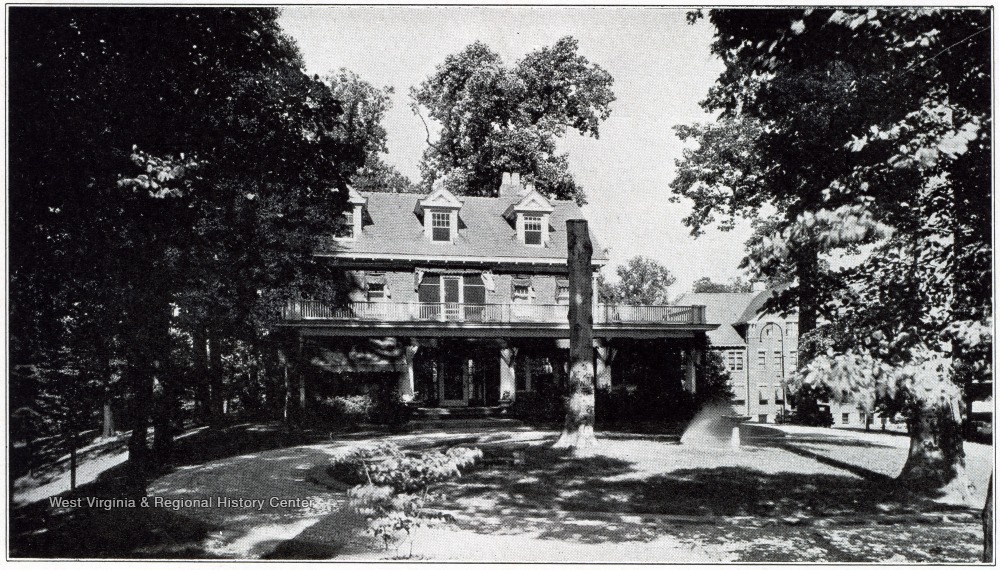 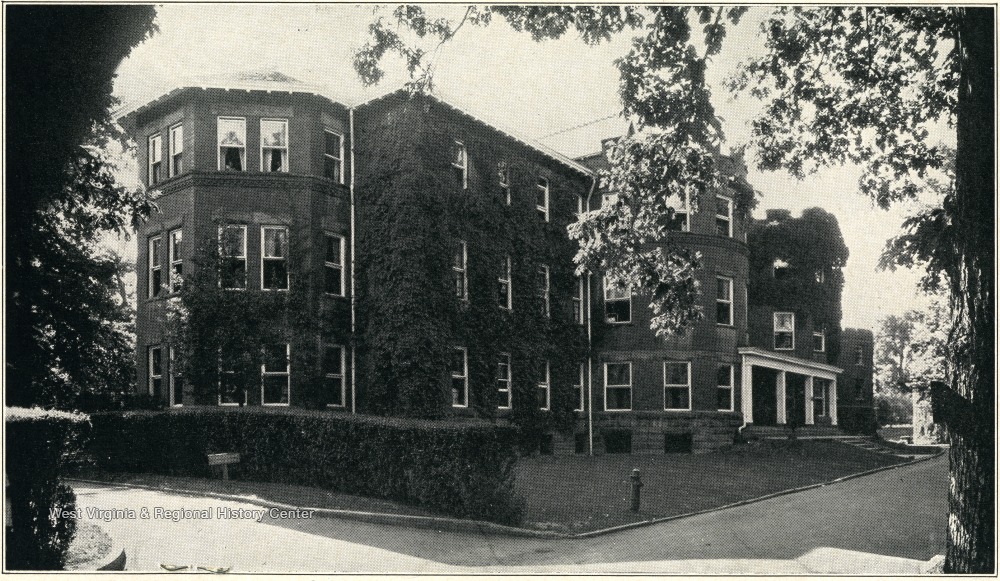 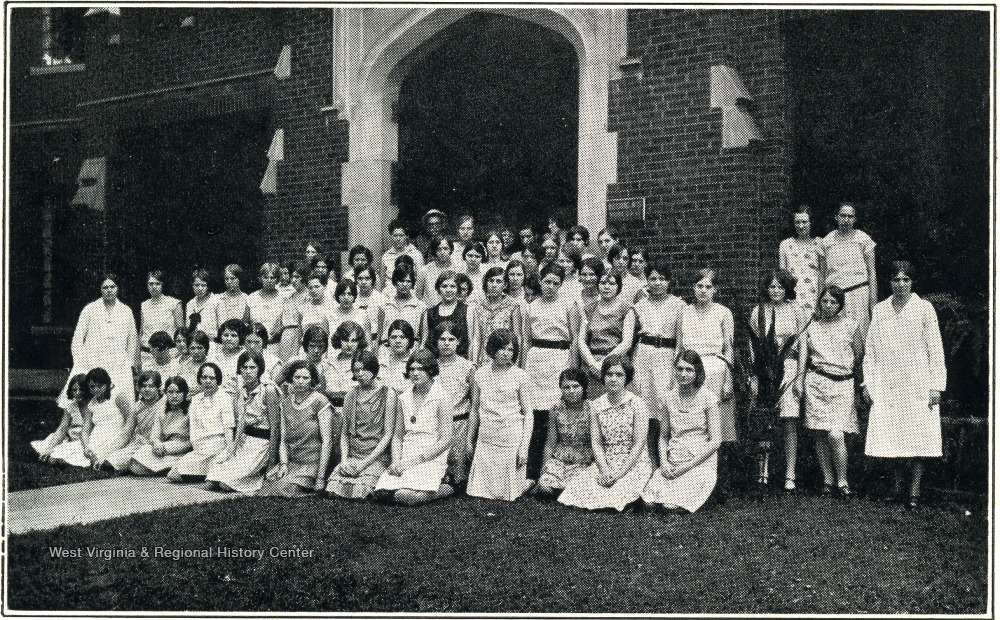 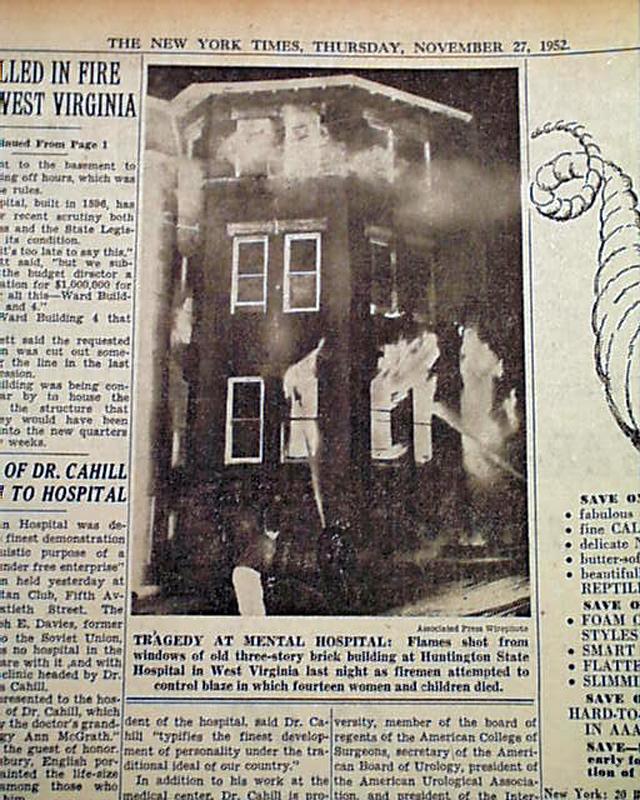 Flames consume the lower floor of the building 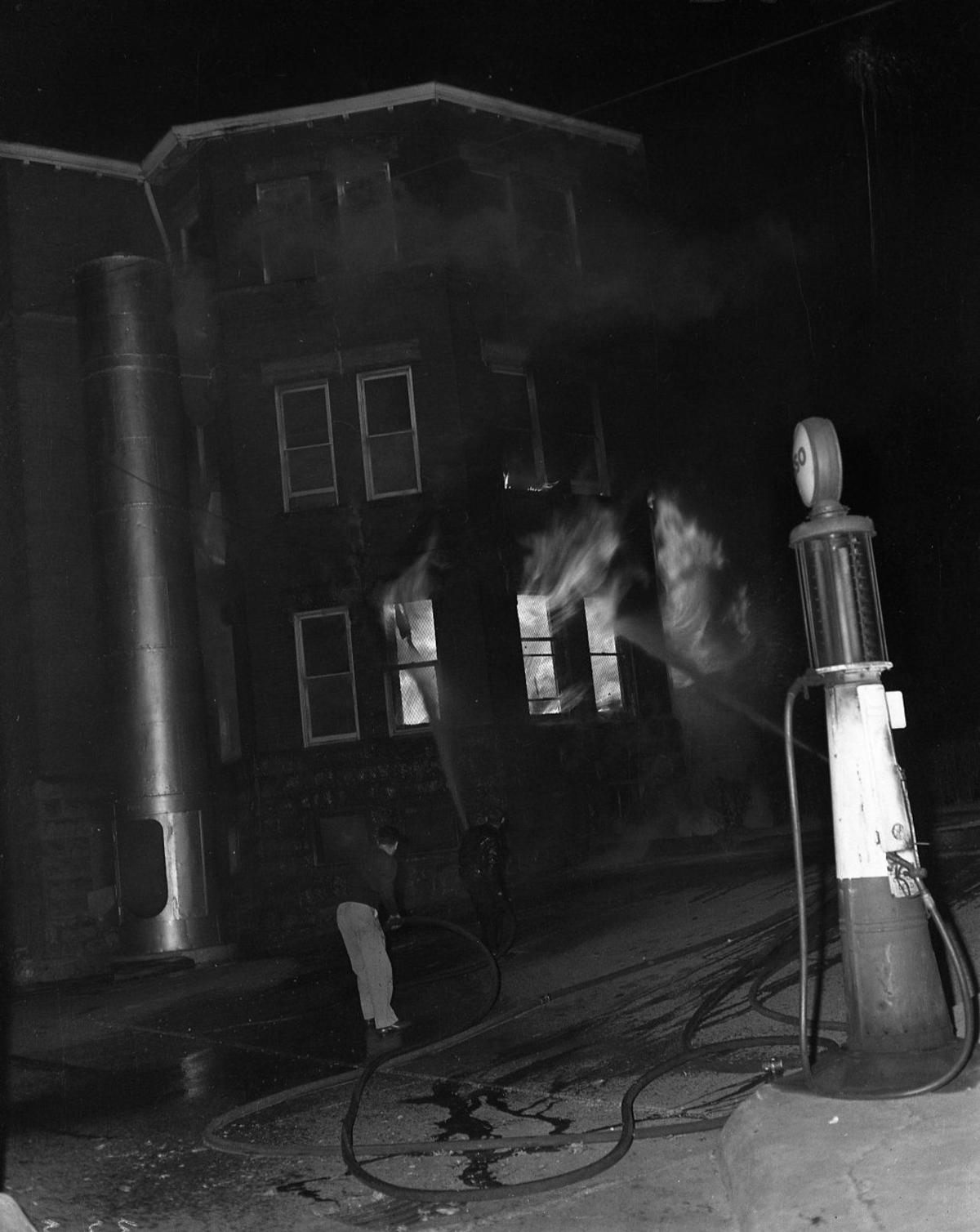 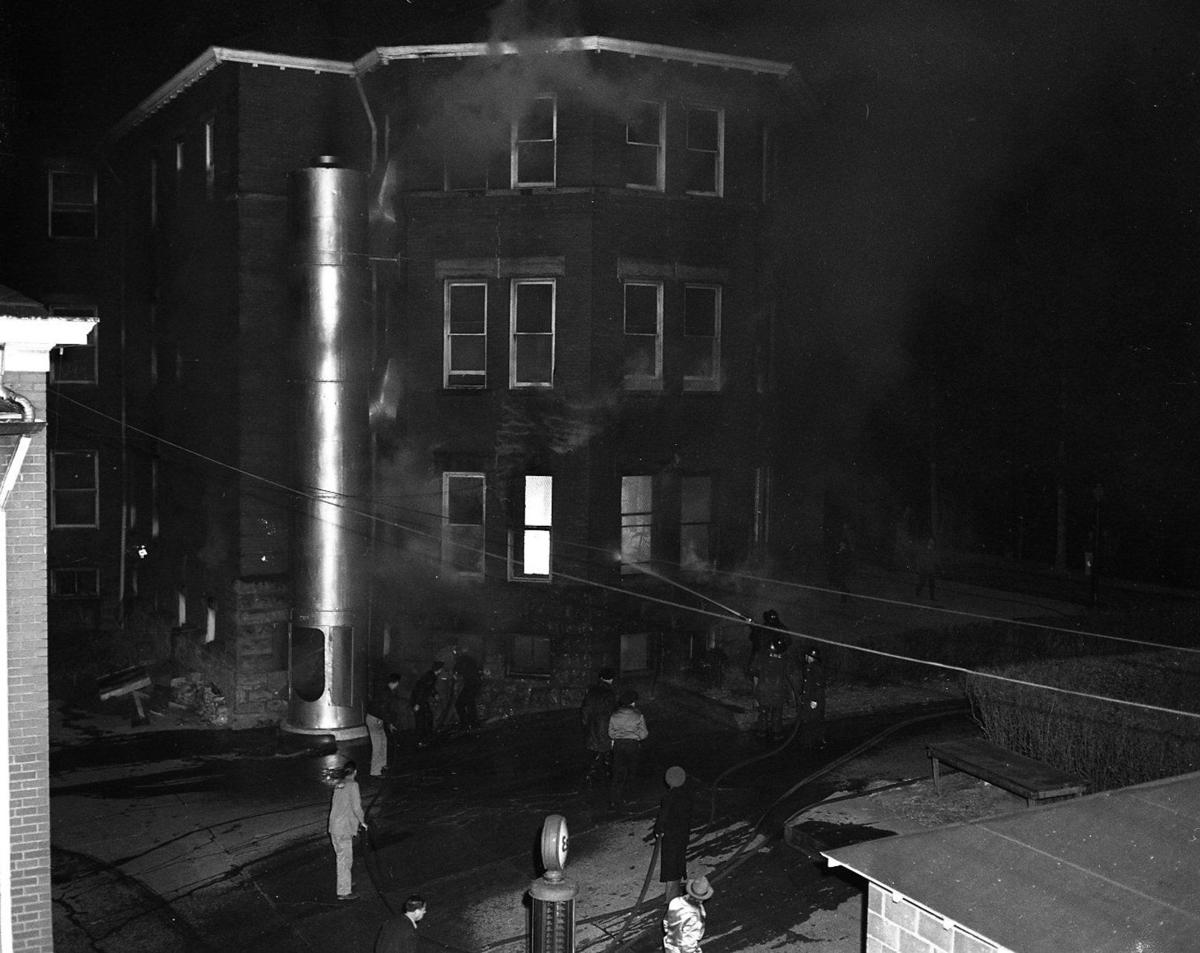 The aftermath of the fire 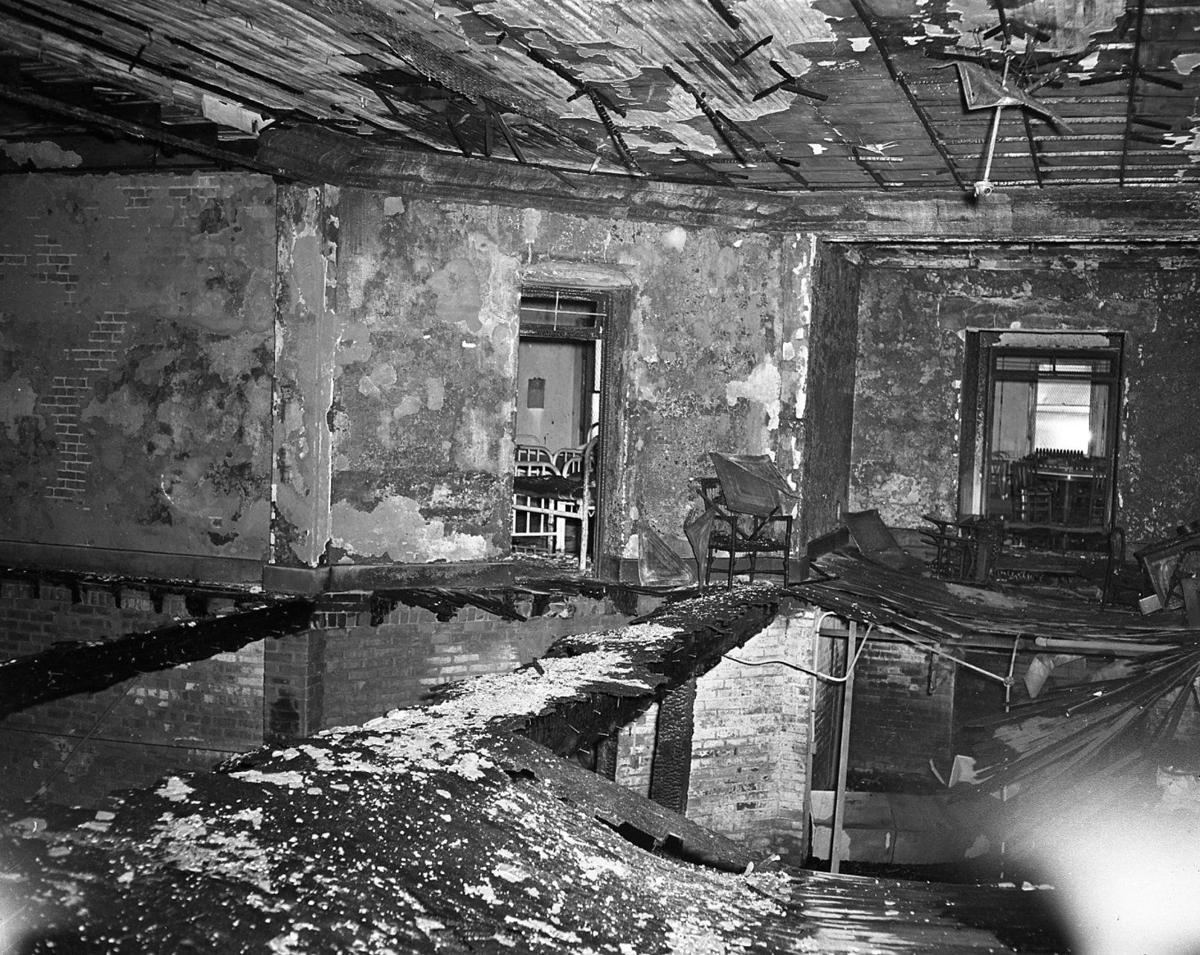 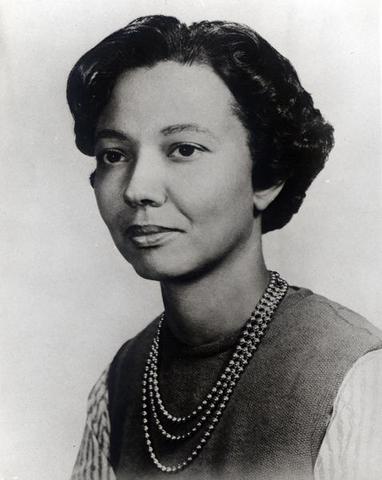 Huntington State Hospital was created by an act of the state legislature in 1897, making it the second oldest hospital in the state of West Virginia. Originally named the Home for Incurables, the facility occupied a 30-acre site that was donated to the state by the local Chamber of Commerce. The hospital was built in the Cottage Plan style, a style of asylum planning that typically consisted of a collection of individual, smaller buildings that held a particular patient type rather than housing all patients in one large building. At the time of its construction, the American public generally viewed mental hospitals as places where the mentally ill could be removed from society for long-term care. Widespread negative attitudes towards mental illness led to stigmatization and confinement of mentally ill individuals. Indeed, the Home for Incurables had a tall wire fence and iron gates, which were not taken away until 1950. In 1901, the hospital’s name was changed to the West Virginia Asylum, and in 1916 the name was changed again to Huntington State Hospital.

The hospital quickly faced issues of overcrowding and patient mistreatment. It was originally designed to accommodate 500 patients, but by the late 1940s the facility held 1,150 patients. There was only one psychiatrically-trained doctor per 150 patients, no psychiatrically-trained nurses, and a single trained nurse for the entire hospital. There was one attendant per twenty patients - meanwhile, it was generally recommended that there be one attendant for every eight patients - and there were only two attendants per ward. In addition, patients were segregated by gender and age rather than condition, meaning that patients with serious mental illnesses were housed alongside those who were merely depressed, and they rarely received specialized care. In the 1950’s, the hospital had a population of nearly 1,800, of which approximately one-third were developmentally disabled, and one-third were geriatric.

A February 1949 article written for the Huntington Herald-Advertiser exposed the degrading conditions at the hospital by providing readers with a “tour” of its four wards: women’s, men’s, children’s and geriatric. At the time, the women’s ward held eighty patients. They were seen to by two attendants who fed them and took them to one of only two toilets in the ward. The attendants, however, were reportedly often ignorant of the different ailments and troubles of the individuals, and therefore could not give the women the specialized care that they needed. The male ward was almost the same. It held seventy-five men with two attendants to care for them. The ward offered its patients no activities or interests, and the hospital had no money for occupational therapy either. Entertainment came in the form of one movie a week in the chapel. Located on the third floor of the hospital, the children’s ward had only wooden benches and little to no sun was allowed in the room. Even when the children were dressed, their clothes were reportedly often soiled and unsanitary. The patients frequently laid on the floor waiting for their next meal, and most were bottle- or spoon-fed regardless of their age. The elderly ward was similarly overcrowded and understaffed. The patients would rock in their chairs and stare at one another because there was nothing else for them to do or see. The rest of the hospital’s facilities were equally feeble. The kitchens were located in a structure far from the wards, and their equipment was old and unsanitary. The food was allegedly carried by the patients from building to building in large iron containers, and usually served cold. As the state of West Virginia only allocated $1 per patient at the time, and 37 cents were used towards meals, meat was only served at rare intervals.

On November 26, 1952, a fire began in the basement of the female ward in Building Four. It was believed to have been caused by a cigarette, since patients were known to regularly sneak down there to smoke after hours. The building burned for about two hours on the lower floors, with smoke affecting those trapped on the top floor. According to an Associated Press story about the fire, firemen had to cut through wire mesh to get inside the building after the front entrance was engulfed in flames, and the patients had to be carried out via an old circular stairway at the rear of the building. Fourteen patients were killed, and three more died of injuries afterward. Five of the victims were girls aged fifteen or younger, while the eldest victim was 89 years old. In the aftermath, hospital authorities revealed that a request to fireproof the hospital had been submitted to the budget director, but it had been rejected or ignored during a legislative session. It was also notable that two other fires had occurred at the hospital within two years preceding the accident, though both had been quickly extinguished: one in a sewing room and the other in a basement storage bin.

In the latter half of the twentieth century, a national trend towards deinstitutionalization and community-based mental health programs, facilitated by the development of antipsychotic drugs, began to gain traction. Following this trend, Huntington State Hospital endeavored to reduce its inpatient population and focus on rehabilitation rather than institutionalization. A vocational rehabilitation center was established at the hospital in 1958. This was the first in the country to be housed at the same location as a state hospital. The center offered vocational, social, psychological, medical, and related services to help patients prepare for a return to community living. In 1977, a complete reorganization of the hospital began, with an emphasis on specializing its direct-care services. The next year, the hospital entered an affiliation with the Marshall University School of Medicine, with a goal of developing the hospital into a teaching institution. The Hartley Act, which was initiated by a class action suit, provoked further changes in the 1980s by mandating that state hospitals provide only two-bed, semi-private rooms for mentally ill patients rather than open wards.

In 1988, Huntington State Hospital became the first state-owned psychiatric hospital in West Virginia to be accredited by the Joint Commission on Accreditation of Healthcare Organizations. In December 1990, the hospital was certified by the Health Care Financing Authority. Building 3, which had housed long-term mentally ill patients, was closed that same year, reducing the hospital to a 90-bed facility. In 1995, the state legislature changed the hospital’s name to Huntington Hospital. Four years later, the hospital was renamed Mildred Mitchell-Bateman Hospital after the first African-American woman to be named to a high-ranking office in West Virginia state government. Mitchell-Bateman was appointed director of the Department of Mental Health in 1962 and remained in that position for fifteen years. Renovations began in 2007 on the second and third floors of Building 2, which expanded the facility into a 110-bed Acute Care Mental Health facility. By 2015, the renovations were completed and the hospital was designated a Tobacco-Free Campus. Today, the hospital continues to provide inpatient psychiatric treatment for adult citizens of southern West Virginia and serves as a training site for future health care professionals in the Tri-State area.