Now home to a small parking lot, this was once the location of Booker T. Washington School, a segregated school that served the black community of Ashland prior to the integration of the public school system. The school dates back to 1903. Prior to 1922, when the city created the first high school program for African American students in the area, black families who wished for their children to continue their education past the 8th grade had no option but to send their children to live with relatives in other cities. During these first two decades, the school expanded from an elementary school to include a two-year high school, and eventually, a regular four-year high school program. The school closed in 1962 as the city worked to integrate its facilities eight years after being legally required to end segregation by the United States Supreme Court decision in Brown v. Board. In Ashland and other communities throughout the region, most of the public schools remained segregated through the late 1950s if not longer. In Ashland, the end of school segregation came as local residents petitioned for full integration, citing the 1954 United States Supreme Court decision that required an end to racial segregation in public schools. 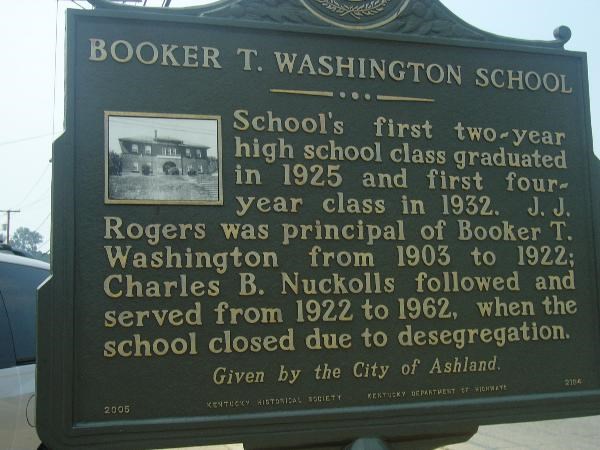 Booker T. Washington School was constructed in 1903 at Seventh Street and Central Avenue. The small brick school was led by principal J. J. Rogers with Effie Carter and another instructor serving as teachers. The Booker T. Washington School grew to serve grades 1-8. The Ashland and Cattlesburg school for Africa American students merged in 1912. Although this may have created hardship for students and parents that had to travel a long distance to attend this school, the increase in students allowed for the creation of more classes.

In 1922 C. B. Nuchols, a former instructor at the Taylor County Industrial High School for Negroes, became the principal. Nuchols added an industrial department along with a two-year high school curriculum. In order to accommodate the new courses, two additional rooms were added and two more teachers were hired between 1922 and 1923. The first high school graduation was held in 1925. During this time, Catlettsburg students in the 8th grade could go on to high school at Ashland at a cost of $30 per semester.