Located between 3rd and 4th streets on Broadway and Spring Street, Biddy Mason Park sits in a courtyard that was the first piece of property Bridget “Biddy” Mason purchased in the 1840s. The former slave was one the most important real estate investors, religious leaders, and philanthropists in 19th century Los Angeles. 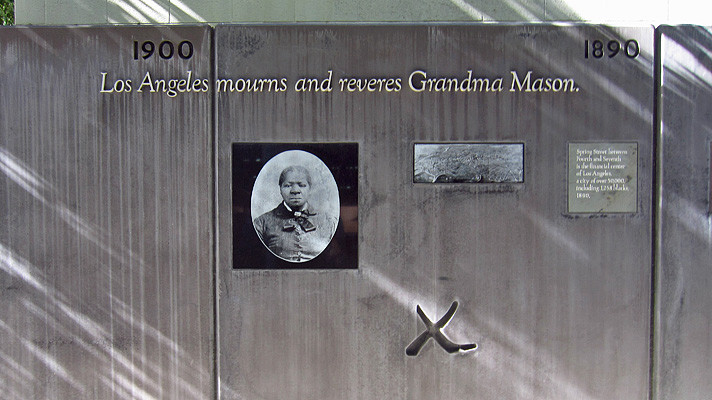 A photograph of Biddy Mason. 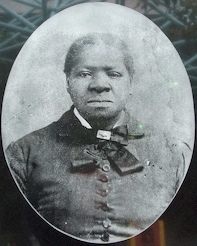 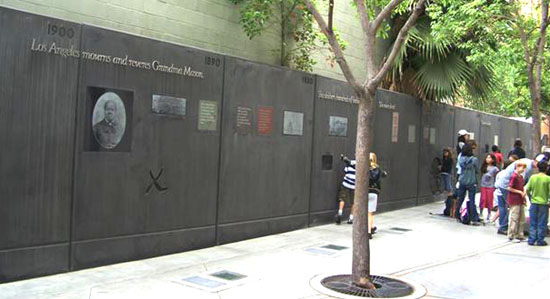 Bridget "Biddy" Mason was born in August of 1818 on a Mississippi Plantation operated by Robert Smith and Rebbecca Smith. The Smiths converted to Mormonism in the 1840s, moving to Utah Territory where Brigham Young had just begun a Mormon community.  Mason was responsible for herding the cattle, cooking meals, and overseeing the children. Again in 1951 the Smiths moved. In San Bernadino, California the Smith family settled, slaves and all. Yet the decision to move there seems curious, as California was a free state and by 1850 did not permit the ownership of people of practice of slavery. It was here that Biddy Mason meet Charles Owens a local leader within the black community of Los Angeles. Owens helped Mason petition California courts for her freedom and that of her daughters; they won their case in 1856. The family moved to Los Angeles where Mason continued to work as a midwife and nurse. Mason had exceptional skills for nursing and was a hard work; both things helped her to create an economically stable environment for herself and her family. She earned a position working for Dr. John S. Griffin a very popular doctor in the the Los Angeles area. Mason worked for Griffin for more than 10 years, establishing herself in the community and saving up money. In 1966 she was able to buy land Spring Street for around $250 making her the first black women to own land in Los Angeles, California.

The land Mason purchased she later sold for $1500. She was able to take the remaining space and build it into commercial ships and offices for rent. She proved herself a savvy businesswomen and continued to establish her fortune until she accumulated almost $300,000.

Aside from being a prominent business women, Mason also was a founder of the First African Methodist Episcopal Church of Los Angeles, which was established in 1872. She was known as a pillar of the community; she gave to many charities, providing food and housing to the poor, regardless of race. She was also known to visit jail inmates and provide them communication with their families and ,at times, just simple piece of mind. Mason died in January 1891, and she was buried in Evergreen cemetery in Los Angeles. After 100 years of little historical recognition  and lying in an unmarked grave, a special headstone was made by Mayor Tom Bradley and members of the First African Methodist Episcopal church, who celebrated her life with a special ceremony. The new stone was unveiled in March 1988.

The Biddy Mason Park offers more than a peaceful selection of trees, plants, and grass; it is home to a timeline wall telling the journey traveled by Mason from her birth as a slave in Georgia in 1818, to giving birth to four of her owner’s children, to Utah, and then on to California, where she petitioned the court for her freedom and won. Created by artists Beyte Saar and Sheila deBretteville, the black cement wall is an 81-foot long by 8-foot high display that is organized by the decades of Mason’s life. Each 10-year section holds photos, maps, drawings, and imprints from Mason’s life.

Though the Biddy Mason Park is considered to be safe during daylight hours, it is recommended that people do not visit it at night.

Monday to Friday: 8am-8pm, Saturday and Sunday: 9am-8pm Avoid visiting at night because the timeline wall cannot be seen well and the park is not as safe in the dark.