Great American Ball Park is located on the banks of the Ohio River in downtown Cincinnati. It is the home of the Cincinnati Reds, the first professional baseball team. The ballpark officially opened on March 31, 2003. 2015 will make the ballpark's 13th big-league season. The ballpark replaced Cinergy Field (formerly Riverfront Stadium), which had been the Reds home field from June 1970 to 2002. 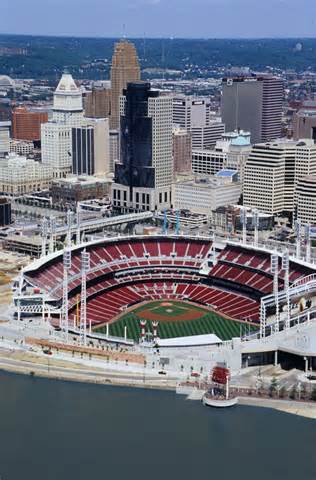 View from the inside of the ballpark 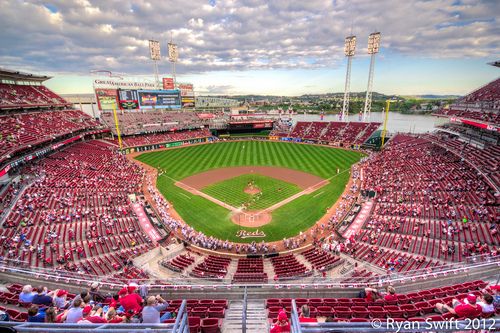 Before Great American Ball Park became the home of the Reds, the baseball team had many other locations.  The very first park was Union Grounds which is now where the Museum Center is located in the Union Terminal train station.  Next the team played from 1876-1879 at Avenue Grounds.  This stadium held up to 3,000 fans.  In 1884, the Reds moved to League Park which was named after the National League.  This park was the first to have a covered grandstand.  There was a fire at this park but in 1902 the grandstand was rebuilt and the park's name changed to Palace of the Fans.  The Reds played at Crosley Field from 1912-1970.  This stadium was the first to have a double-decked grandstand.  It was also the site of baseball's first night game and hosted Cincinnati's first World Series Championship team.  Riverfront Stadium was completed in 1970 and seated more than 52,000 fans.  The Reds went on to win three World Series at this ballpark - 1975, 1976, and 1990.  This started to increase attendance to the games.  The Great American Ball Park became the Reds' home in 2003 and was left open on one side to provide the fans a view of the Ohio River.4

"Although praised for its innovative features, breathtaking views and affordable seating options, Great American Ball Park also pays tribute to the Reds' rich history."  On Crosley Terrace there are statues depicting Reds legends Ted Kluszewski, Ernie Lombardi, Joe Nuxhall, and Frank Robinson.  Also, famous-dates banners remind fans of many historic moments in club history.  Inside the park Italian-marble mosaics greet visitors.  The "toothbrush" light towers and the nostalgic Sun/Moon Deck are just some of the ballpark's features that give it a truly historic influence.1  There is also a play area for children that is located in the Red's Fan Zone.

Before the ballpark began, there was debate surrounding where it should be located, from its construction, and all the way up to the numerous changes that have been made to the park since its 2003 opening.2  The Ballpark opened on March 31, 2003 and cost approximately $280 million to build it.  The Great American Ballpark seats 42,271 and the playing surface is natural grass.  The furthest distance for a homerun ball to be hit in the ballpark is at centerfield at 404 feet.1

Recent additions to the ballpark have helped bring even more amenities to make the fan experience even better.  These include the Cincinnati Bell Riverboat Deck beyond centerfield, the hhgregg Highlight Zone on the third-base concourse, and the all-new FOX Sports Ohio Champions Club, where there is all you can eat included with the price of the ticket.1  On January 21, 2013, the ballpark was chosen to host the Major League Baseball All-Star Game for 2015.  The park invested $4.5 million in improvements for the 2015 season and the event.3

This ballpark, although new, holds important historical meaning for the city and state of Ohio. The team originated as the Cincinnati Red Stockings in 1869. The Reds are also the oldest team that has played every year since it’s founding in one city. They have altered their name throughout the years. At one point they referred to themselves as the Red Stockings due to the Red Scare and fear of Communism in the U.S. in the 1950s. They now go by just the Reds and often the nickname “Big Red Machine.” The Reds have won five World Series titles since their existence. They gained notoriety during the 1970s for their exceptionally good program with notable players such as Johnny Bench, Pete Rose (all-time hits leader), Joe Morgan, and Ken Griffey. They have not won a World Series title since 1990. Despite their non-consistent seasons they still gather substantial crowds for every game. Aroldis Chapman threw the first no hitter was pitched by Homer Baily in 2013 and the fastest pitch recorded at 105 mph. The All-Star game will be played there in 2015.