A small park with partial replica is located at the intersection of 15th and Exchange streets, where John Jacob Astor's fur traders originally constructed their fort. A mural recreates the vista from the Fort in 1813 as a backdrop to the recreated stockade building on the Fort Astoria Park property. John Jacob Astor attempted to break the British monopoly on the Pacific Northwest fur trade starting with construction of this fortified trading post in 1811. The fort subsequently became an important part of the American territorial claim to the Oregon Country. Astor sold the fort to the British North West Company in 1813. 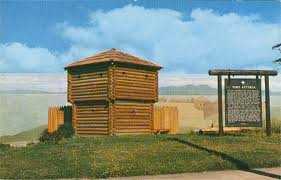