“Eight Hours for Work, Eight Hours for Rest, Eight Hours for What We Will.” This was the slogan of the laborers of Milwaukee who organized the largest pro-labor demonstration up to that point in Wisconsin history. The workers and their supporters were among the vanguard of a nationwide movement calling for legislation setting the work day at 8-hours. The Milwaukee campaign began May 1 1886 with a labor strike that brought the city to a halt. Then on May 2, 15,000 people joined the parade. On May 5, 1,500 workers determined to march toward the Bay View Mills, one of the companies that were notorious for forcing their employees to endure exceptionally long working days. When the marchers were 200 yards away, the militia commander guarding the compound told the protesters to disperse. Whether or not they heard him, they did not, and he orders his soldiers to open fire. Seven people were killed, including a 12-year-old boy. The Bay View Historical Society and Wisconsin Labor History Society launched several efforts to commemorate the event, culminating in the creation of this state historic marker and annual commemorative events held on the first Sunday of May each year. 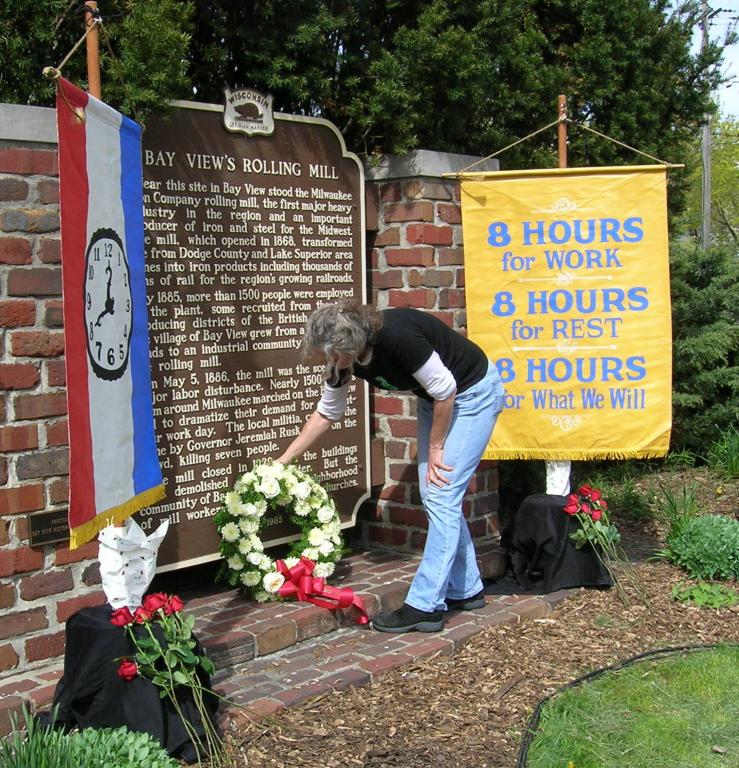 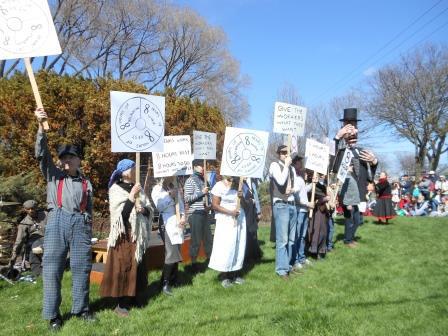 The story of the Bay View Massacre is filled with strange ironies. In some ways, it takes place in the context of real labor successes. The same campaign that led to the bloodshed had already led the Milwaukee Common Council to adopt eight hour work days for municipal workers, and several other private companies had likewise followed suit.

Yet, the Milwaukee business world was not united in its approach or take on the issue. As the protests continued, Best Brewery also raised wages and moved to an eight hour day. This both gave the mill workers increasing hope and put increasing pressure on the mill.

When the predominantly Polish protesters determined they would march to the mill, town police called Governor Jeremiah Rusk and stated that they did not have enough police present in that case that violence should erupt. Rusk responded by sending the local militias. As the protesters came within 200 yards, the militias attempted to disperse the protesters. It is unclear whether the protesters could hear the commanders or even if language created too much of a barrier to be heard, but they did not disperse. When the commanders called Governor Rusk, he advised them to shoot. The militias shot a single round, killing at least 7, including a 12-year-old boy, who had been curious as to what was going on and a retired mill worker who lived nearby and had not been a part of the protest.

The massacre put an end to the 8-hour workday rallies, and workers returned to their 10-12 hour workdays immediately. Meanwhile, on May 9, the Milwaukee Journal announced that Edward P. Allis would be firing every Polish worker and replacing them with other "less radical" nationalities. Many other companies followed suit, and it became very difficult for Polish individuals to find work in Milwaukee for a time.

The tide, however, did begin to shift in the next election. In fall of 1886, the People's Party (a socialist, labor-oriented party) elected a congressman, several state legislators, and many county officials. In 1888, the city elected even more socialist officials and eventually elected Emil Seidel as the first socialist mayor in 1910. Today visitors are invited to remember the contributions of those early protesters in shifting the mindset of society at the state historical site marker.