McKim's design of the Main Branch

The music room in the McKim building

The McKim building was listed on the National Register of Historic Places in 1973, and was designated a National Historic Landmark in 1986 for its architectural and historical significance. 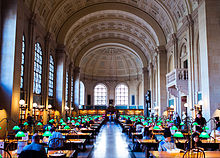 This was the first municipal free library in the United States, established by the Great and General Court of Massachusetts in 1848. The first location was a tiny schoolhouse on Mason Street, but this proved to be an unsuitable location because of the estimated 16,000 volumes the library was supposed to house. So the commission committee of the library in December, went on a surveying hunt for a larger building to house the library and they decided on a location on Bolston Street, where the main branch has sat since 1895. The building was designed by architect Charles Follen McKim. The library staff felt that they should expand their services to wider range of patrons, and in the late 1800s, worked to expand it. In 1870, the first public branch library was opened in the United States, located in East Boston. According to the Boston Public Library's Website, from 1872-1900, 21 library branches popped up in Boston neighborhoods. The original Copley Square building was expanded in 1972 with addition of a building designed by Philip Johnson.

The McKim building was added to the register of National Historic Places in 1986. The McKim building is one of the most valuable parts of the main branch. It contains beautiful murals on the walls, a wide variety of rare books, maps, and manuscripts, as well as a gallery to display and eclectic array of artifacts amassed from the past 160 years. There is even a restaurant where you can get a bite to eat and read. The library as a whole holds a massive collection of 23 million books, maps, musical compositions, and even manuscripts. Some of the most interesting items within the collection specifically are first folio editions of William Shakespeare's works as well as original music scores from some famous composers like, Mozart.

The Boston Public Library encourages visitors to access this vast collection, as some of the materials would only be accessible to research scholars anywhere else. They allow patrons to view this items through exhibits within the library The BPL has many different components: The central library, 24 branches, map and business centers, as well as their website--that offers may resources like the catalog. According to the BLP website, the Central Library in Copely Square contains five significant elements: Bates Hall, The Chavannes Gallery, Library Tours, The Abbey Room, and the Sargent Gallery. All areas listed have beautiful architecture, with murals lining the walls and arched ceilings. The Chavannes Gallery is a collection of murals by French painter Pierre de Puvis Chavannes, while the Abbey Room contains murals lining the walls and a French marble fireplace. The library tours last about an hour and visitors can see the whole Central Library and learn about architects, Phillip Johnson and Charles Follen McKim.

Soon after the library's establishment, the library collection of 16,000 volumes grew out its first location on Mason Street, and therefore in 1895 it was relocated in a new building on Bolston Street. The new building was designed by the architect Charles Follen McKim. Since its completion the building was expanded two times, with two new additions: the first designed by Joseph McGinnis, constructed in 1918 and demolished in 1971 for the construction of the second addition, designed by the architect Philip Johnson. Some of the most interesting items within the collection specifically are first folio editions of William Shakespeare's works as well as original music scores from some famous composers like, Mozart.