Originally constructed as the Olivet Congregational Church in 1868, it was later purchased by the Episcopal "All Saints' Pro-Cathedral" parish--a parish that was trending against the current Milwaukee diocese, which did not favor cathedrals. Today visitors to the cathedral can see the clear influences of the Oxford Movement and Cambridge Camden Society on the early church congregation toward catholic and "theologically correct" styles of architecture and worship. The placement of the nave and chancel, the high alter, and the stalls for clergy and the choir all are living examples of the early story of All Saints' Cathedral.

The beautiful interior of All Saints Cathedral 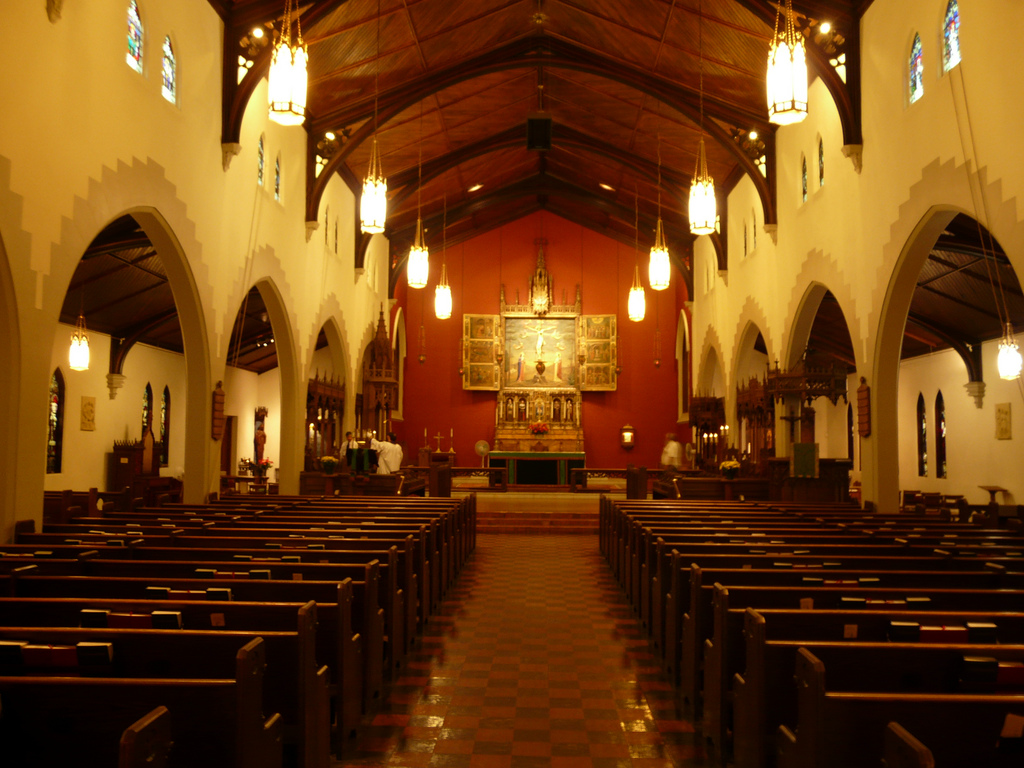 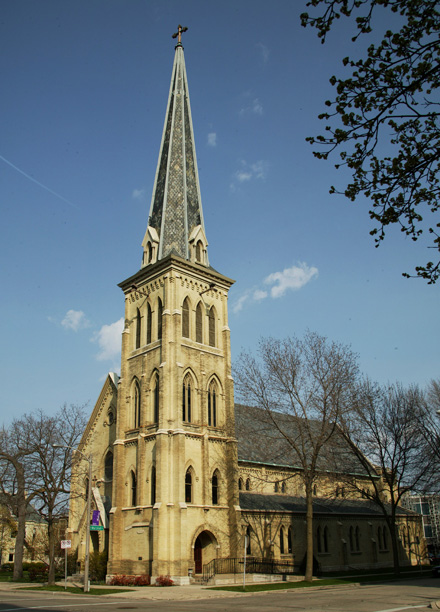 The cathedral's history begins with the Free Church of the Atonement in 1857. The church was located on Milwaukee's eastside and soon after its founding merged with the Church of St. Paul. This new congregation was known as Trinity Church and was eventually deeded to the Right Reverend William Edmond Armitage, Bishop Co-Adjutor of the then Diocese of Wisconsin.

Armitage, along this superior Bishop Jackson Kemper, held a dream of building a cathedral for the Diocese of Wisconsin. However, cathedral were not so popular in the Episcopal Church at that time. In 1868, Armitage requested the General Convention of the Episcopal Church create a canon for the establishment of diocesan churches. His request, however, was promptly ignored. At the time of his request, no "canonically correct" Episcopal cathedral existed in America. Moreover, Armitage's idea for a cathedral was vehemently opposed by the dominant parishes of the Diocese of Wisconsin.

However, Trinity Church, under Armitage and without parochial status, was just what Armitage needed to push his idea forward. He temporarily closed the church and within the month reopened it under the new name "All Saints' Pro-Cathedral."

In July 1869, a newly formed legal parish organization, purchased and received a new parcel of land on Milwaukee's eastside to build the anticipated cathedral. However, without a diocesan canon (and therefore no diocesan funds), the project turned out to be too much for the All Saints' parish. They got no further than building the foundation of the church, when out of money, the property reverted to the mortgagor. The elegant Victorian home, which was built on the intended cathedral foundation, can still be seen today.

In 1871, the parish still persistent in its dream of a cathedral, purchased land on what is today East Juneau Avenue. They then moved their existing building to this land and began worshiping in this new location. Much to their joy, within a few months, the Olivet Congregational Church, a few yards from their newly purchased property, sold them its building and land. Now they had the building to match their cathedral dreams.

In 1873, the Diocese of Wisconsin voted to make All Saints' with its lovely new building the cathedral of the diocese. In 1898, following several years to work to clear the congregation's debts, the Pro-Cathedral was consecrated to full cathedral on All Saints' Day.

Under the influence of Bishop Isaac Lea Nicholson, starting in 1891, the congregation was exposed to the ideas and beliefs of the Oxford Movement and Cambridge Camden Society. This meant a greater emphasis on the pre-Reformation traditions, experiences, and architecture. The building's transition from Olivet Congregational Church displays well the guidelines of the Cambridge Camden Society. From the division of the interior room in to nave and chancel to the elegant stalls of the clergy and choir and to the beautiful stained glass windows depicting the lives of saints, the cathedral is what the Cambridge Camden Society considered at the time to be "theologically correct" architecture.

There are daily worship services. Times can be checked at the cathedral's website: http://www.ascathedral.org/worship.html