Cane River Creole National Park is home to the former Magnolia Plantation House and all its outbuildings. The whole site encompasses 18 acres, which are open to the public to tour free of charge. The National Park includes a Blacksmith and plantation shops, cabins, a gin barn, and a former slave hospital. In the gin barn remains a wooden screw-type cotton press; it is the last of its kind remaining on its original grounds in the United States.

The entrance to the Cane River Creole National Historical Park. 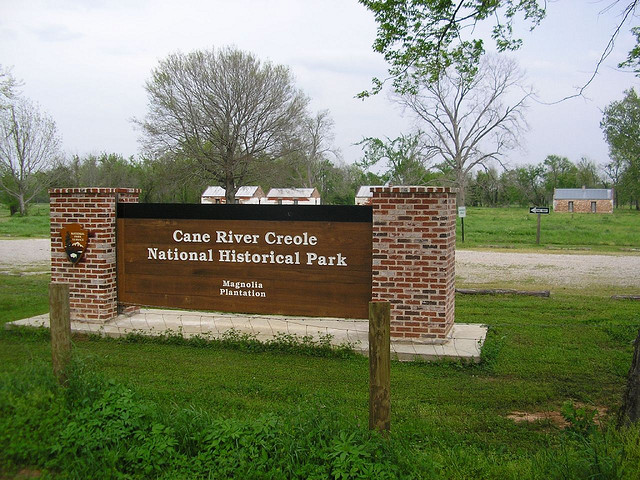 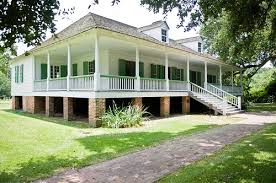 One of the old slave buildings on Magnolia Plantation at Cane River Creole National Historical Park. 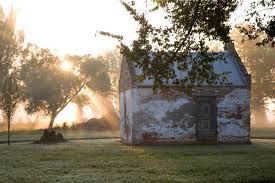 Ambrose Lecomte II founded Magnolia Plantation in Natchitoches, Louisiana in 1830. He and his wife, Julia Buard purchased the land to expand that family’s already plentiful cotton business. What is now only 18 acres used to be 5,000, which led to the extensive use of slave labor and huge amounts of profit. Magnolia Plantation’s success allowed for the creation of two more sister plantations, which were established in nearby Natchitoches with Magnolia as a sort of home base.  The house was extensively damaged during the Civil War after Northern forces took the home as a stronghold for Federal Troops. Ravaged by the fighting, the main house was rebuilt in the exact style of the original in 1897.

Magnolia Plantation grew into one of the Lecomte family’s most successful agricultural ventures. It continued to serve as a cotton farm until the 1970’s. In these years people were still hand picking cotton on Magnolia. However, this would end by the 1980’s and the general store on site would close in 1990. To preserve the location and prevent it from falling in to ruin, it was purchased by the National Park Service in 1994.

Aside from its purely historical acclaim Magnolia Plantation also has a level of popularity within the occult community. It is deemed by many to be haunted, and lots of these stories of hauntings may find their origins in actual historical fact.

Though the argument could be made the Lecomte family treated their slaves humanely relative to the normalized treatment of the time, primary source documents, including family journals, describe hunting escaped slaves to the Texas border. There are also remaining artifacts like leg and arm stocks that contribute to the idea that the slaves on Magnolia Plantation were publicly punished, starved, beaten, and humiliated. There are 8 remaining slave buildings. These brick quarters are split into two room units that were meant to house entire family. Sometime 10 people lived in the tiny space with no bed or proper luxuries, and only one fireplace between both rooms.

There is also evidence of a voodoo element among the slaves on Magnolia Plantation. Though this is not an unreasonable deduction considering the Plantations location and the concentrated Creole population, specific stories of voodoo witchcraft are no particularly well supported, academically speaking. There are, however, tales of the Plantation Blacksmith sneaking voodoo images into the designs of the Christian crosses he was instructed to make for the family, and hiding voodoo symbols on the backs or insides of this jewelry his masters would eventually wear. These crosses have been found and examined by historians, though we may never know the Blacksmith's intentions.

Magnolia Plantation was visited by the Travel Channel’s Ghost Adventures cast in 2009 to investigatd the property’s supposed hauntedness. The public was open to visit the house at that time. Today, the main house serves as a private residence and can be viewed only upon request and approval.