Tacony Plantation was established by Samuel Davis, the son-in-law of Don Jose Vidal for whom the town of Vidalia was named. Samuel Davis's son, A. V. Davis received the plantation when his father died in 1853. By 1860, A. V. Davis owned over six hundred slaves and was the wealthiest planter in the parish. John R. Lynch was born a slave on this plantation in 1847 and later became the Mississippi’s first Black U.S. Representative and Speaker of the House. 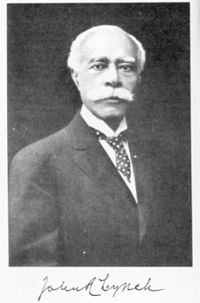 Tacony Plantation was owned by Alfred Vidal Davis and appears to have been established in the 1840s while the plantation manor appears to have been completed around 1850. Tacony is a Native American word meaning “Big Man,” referring most likely to Mr. Davis. In 1860, Davis became among one of the richest cotton planters in the state of Georgia. His land produced 3,387 cotton bales and 17,000 bushels of corn. The home was restored by Hal Garner.

John R. Lynch was born on the plantation in 1847. Due to a slave law, the children of slave mothers were slaves, regardless of paternity. His father was the manager of the plantation and eventually fell in love with John’s mother, an African American woman. John’s father attempted to buy his family out of slavery, but could not afford the required bond. He died in 1849 before freeing his family. Following his father’s death, his mother and her two sons were sold to a man in Mississippi. He was freed in 1863 following the Emancipation Proclamation and the reaching of the plantation by the Union Army.

Lynch worked for Union army units until the war ended in 1865. He got a job to work with a photographer and began to attend night classes taught by Northerners, and eavesdropped on lessons through open windows down the street from his work. AT the age of 20, John joined the Republican Party and attended the constitutional convention in 1867.

In April 1869 at age 22, he was appointed to be the military governor as a Justice of Peace. Later in the year, he was elected as a Republican to the Mississippi State House. In 1873, he was reelected and also elected to be the Speaker of the Mississippi State House, the first African American elected to the position. John, at age 26, was elected into the US Congress from Mississippi’s 6th congressional district. He was very supportive of the Civil Right Act of 1875 to ban discrimination in public accommodations. In 1880, Lynch ran against Democrat James R. Chalmers and contested the Democrat’s declaration of victory. He was awarded his seat in Congress in 1882 but lost re-election in 1882. Lynch remained a member of the Republican National Committee for Mississippi. President Theodore Roosevelt nominated Lynch as chairman of the Republican National Convention. In 1864, he was the first African American to chair the convention.

Lynch went on to write a book titled, The Facts of Reconstruction, in 1913. He argued that Blacks had made substantial contributions during the Reconstruction period. Articles were also published by Lynch in the Journal of Negro History. Lynch’s views were later supported by historians, such as W.E.B. Du Bois. John died in 1939 at the age of 92 and is buried in Arlington National Cemetery due to his service in the Spanish American War.