The Lower Sioux Agency was established by the United States government in 1853. It was used to oversee the newly created Lower Sioux Indian Reservation after the Treaty of Mendota in 1851. It was how the government established and kept order within the reservation. It was also functioned as a trading post between settlers and Native American. The poor treatment of the Native Americans within the reservation would eventually lead to the Battle of The Lower Sioux Agency on August 18, 1862. This would be the first battle of the Dakota War of 1862. 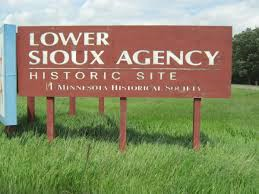 The Lower Sioux Agency was established in 1853 to oversee the Native Americans with the new Lower Sioux Indian Reservation. Also it was a trading post for Native American people and settlers. This was also the location of the first battle of the Dakota War.

The Sioux attacked the agency on August 18, 1862 led by Taoyateduta (Little Crow). The Sioux  surround the agency and then gave a signal to attack, killing 18 traders and government employees. The Sioux after attacking the agency, routed more settlers attacking along the Minnesota River Valley. This would be known as the Dakota War of 1862. By December of 1862 the government had halted the Sioux uprising.