The Fick Fossil and History Museum, which was established to showcase the Ficks family’s findings and artwork, allows you to walk through the history of Logan County. Visitors start in the Prehistoric era, amid sharks teeth and fossils and end walking the through replicas of the early boardwalks of Oakley during the Dust storms of the 1930’s. Most of the fossils in the museum were found within the vicinity of the Fick’s homestead near Oakley. Vi combined fossils and shells with oil painting to create one-of-a-kind artwork. These folk-art paintings are prominently featured in the museum. The museum houses replicas of Oakley’s first Depot, a sod house, Prather’s Creamery, and Oakley’s General Store. The museum also houses a large, impressive collection of rocks and minerals from the Oakley area and around the world including the remains of ancient tombs! Among its more than 11,000 sharks teeth and many fossils there is the world’s oldest known mosasaur fossil, a 15 foot Xiphactinus Audax prepared by well-known fossil-hunter George Sternberg, and other rare fossils. 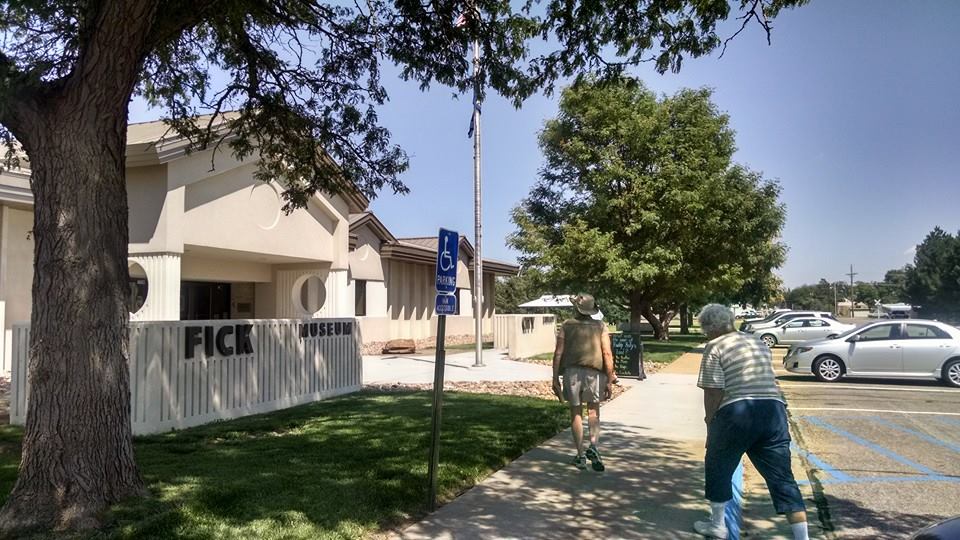 People don’t generally associate Kansas with the ocean but Kansas was a very different place 80 million years ago than it is today!  Around 70 to 90 million years ago, an inland sea stretched from the Arctic Ocean to the Gulf of Mexico and Kansas was under water.
By 1964, however, this vast ocean was long gone. It was then that Oakley-area residents Ernest and Vi Fick started to seriously collect the fossils left by the ancient sea creatures that inhabited this prehistoric sea. In 1971, they had collected thousands of shark teeth and complete fossils.  Vi Fick incorporated many of those fossil findings into a very unique collection of artwork. Soon, their collection had outgrown their home.
The facility is small, but is easily accessible by the major intertstate that passed by the town. The management has made great effort to bring this museum to a high level of interest, and is certainly more than just a presentation of fossils. Local museums are becoming increasingly rare and this one is a prime example of pride of place and heritage. The eclectic presentation of artifacts reflect local history, culture and art with some significant paleontological specimens. Its presentation provides a delightful slice of Americana and a perfect 1-2 hour diversion amid touching stories and reflections of the human stories told here leave one with a what is usually a daunting passage through Kansas and eastern Colorado. The human scale for this little museum is fitting, and the warm, if poignant, appreciation for this American prairie culture, straining from depopulation in the 21st century, can add a powerful note of nostalgia, as this conflict still continues.

Walking tours are available, and with advanced notice, a docent-led tour can be arranged for small groups. Contact the Museum for more information.