The Shelton McMurphey Johnson House is a historic home located on the southwest side of Skinner's Butte Park in Eugene, Oregon. It was built in 1888 and designed by architect Walter D. Pugh in the Queen Anne style. The house is named after the three families lived in the house. Today, it is owned and managed by the City of Eugene. Visitors are allowed on the first floor. The home can be rented for weddings, meetings, and other events. It was entered into the National Register of Historic Places in 1994 and was previously named a City of Eugene Landmark in 1975.

The Shelton McMurphey Johnson House was constructed in 1888. Visitors will get a sense as to what life was like in the house at the turn of the century. 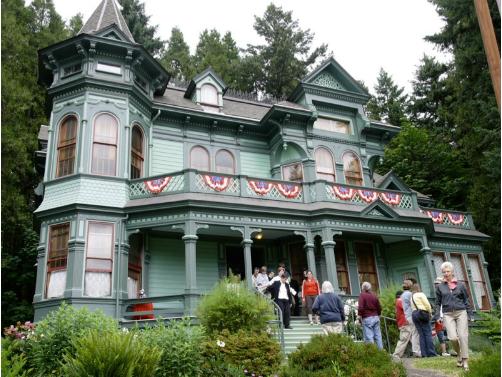 The house was originally built for Dr. T.W. Shelton and his family. They lived there for many years. Shelton died in 1893 and his wife deeded the property to their daughter, Alberta, and her son-in-law Robert McMurphey. Robert died suddenly in 1921 and Alberta passed away in 1949. The house was sold to Eva and Curtis Johnson in 1951. Eva lived in there until she died in 1986. The building saw numerous additions and modifications over the years. The city now manages the property along with the help of volunteers.