At a time when Colorado was home to a strong Klu Klux Klan presence, Lincoln Hills Resort was established in the early 1920s as one of the only resorts accessible to African Americans, and its Wink’s Lodge was built between 1925 and 1928. Due to the fact that there were only three other resorts of its kind in the country – none of which were on the west coast - the resort attracted many famous African American poets, musicians, writers, and artists of the time including Billy Eckstein, Lena Horne, Duke Ellington, Count Basie, Langston Hughes, and Zora Neale Hurston. Today, the lodge is owned by Beckwourth Outdoors and is listed on the National Register of Historic Places for its national significance. 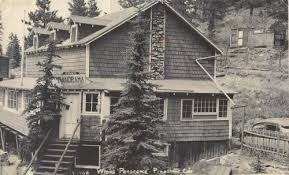 Lincoln Hills Resort and its Winks’ Lodge is located about an hour outside of Denver, Colorado in the renowned Rocky Mountains; it served as a popular vacation destination for African Americans from not only the Denver area but the rest of the United States as well from its official opening in 1925 until 1965. The resort as a whole was established in the early 1920s, and the construction that was begun on the three story, six bedroom lodge in 1925 was finished by 1928. The owners of the lodge, Obrey Wendell Hamlet along with his first and then second wife, offered the rooms from $2 to $3 a night which included amenities such as meals, lodging, trout fishing, mountain climbing, and horseback riding. Furthermore, patrons could buy small plots of land on the resort to build their own cabins for about $50.

The fact that it was one of very few resorts that were created especially for African Americans meant that it attracted some of the most famous African Americans of the time such as Billy Eckstein, Lena Horne, Duke Ellington, Count Basie, Langston Hughes, and Zora Neale Hurston. Ironically, the onset of the Civil Rights Movement was the historical event that ultimately caused Wink’s Lodge to close its doors; as federally mandated desegregation made formerly all-white resorts accessible to African Americans, resorts that were strictly African American began to lose their appeal, especially if those resorts were long distances from their original pool of patrons. When the initial creator of the lodge passed away in 1965, business dwindled even further, and by 1971 his second wife, Melba Hamlet, was forced to sell off all of the Lincoln Hill properties, including the once famous lodge.

The purchasers of the lodge did not want its rich historical value to be forgotten or overlooked though; they fought to have Wink’s Lodge listed on the National Register of Historic Places, and they succeeded at accomplishing this feat in 1980. In 2006, a group named Beckwourth Outdoors purchased the lodge with the intention of restoring its function to its original purpose, which was to provide an array of outdoor activities for people who generally live in the city, particularly young at-risk African Americans.