Built in 1881, the First Congregational Church of Spokane—now Westminster Congregational Church—is a congregation of the United Church of Christ. According to its website, it is a progressive Christian church. It was designed by architects Worthy Niver and John K. Dow in the Richardsonian Romanesque style. It is the oldest standing church in Spokane. It was entered into the National Register of Historic Places in 1978.

Interior of the Church 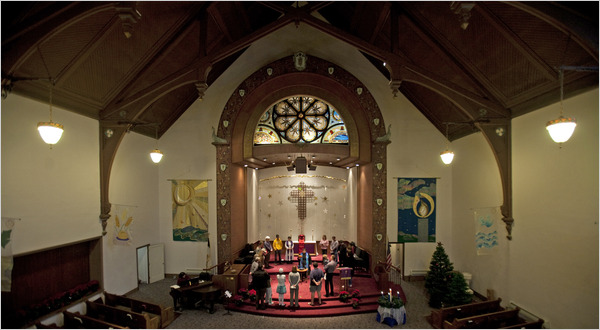 The church was founded by Reverend Henry Cowley (1937-1917). He and his wife were invited by the Spokane Indian tribe to become teachers. Cowley became more than that; he championed their causes in the state and was also a key figure in Spokane's economic development. He started his congregation in his home 1879. The church was built two years later. A second church was built in 1890 and later expanded in 1927 to accommodate the increasing numbers of members. Renovations replaced rounded turret with seen today. The church joined the United Church of Christ in 1963.