In 1915-17, Riverside became the stage for a challenge to the Alien Land Law when Issei (first generation, immigrant Japanese) and restaurant owner Jukichi Harada bought a home in downtown Riverside. He placed ownership in his second generation, American born children. His mostly white neighbors resisted his presence, taking him to court. The case went all the way to the California Superior Court, which eventually decided in favor of the Harada's. Given its importance, the Harada House is among the most significant and powerful civil rights landmarks in California. This site and the story of the Harada family embody local, state, national, and international issues of civil and individual rights regarding immigration, assimilation, and citizenship. The Riverside Metropolitan Museum manages the house.

The Harada House is a National Historic Landmark. 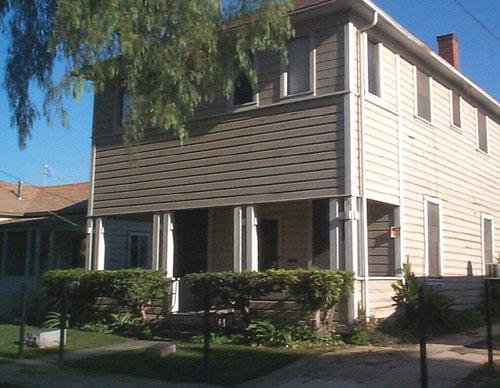 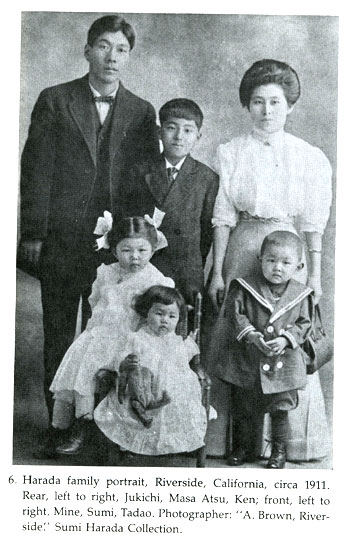 Ken and Jukichi Harada circa 1939 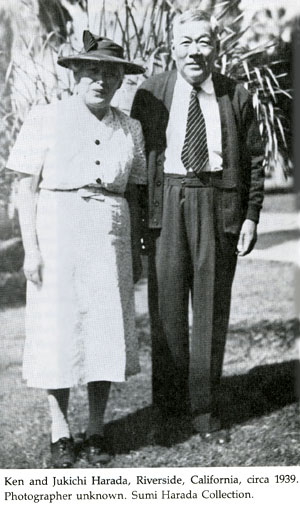 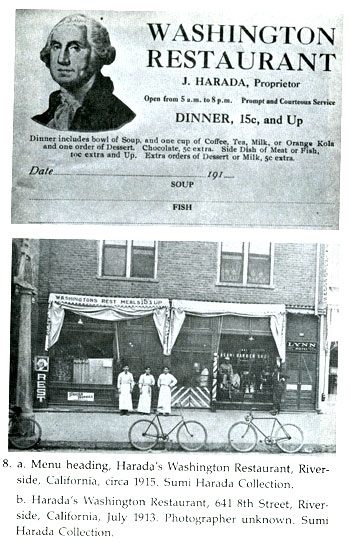 Jukichi Harada, his wife, Ken, and their first son, Masa Atsu, after their arrival to the United States settled in Riverside, California in 1905. They soon were operating a rooming house and the Washington Restaurant, which featured "American-fare" and was decorated with pictures of United States presidents. The restaurant was located at 3643 University Avenue in Riverside. The Haradas lived upstairs in this building until they moved to Lemon Street.

Jukichi, following the death of his first American born son, sought a home with healthier conditions for his family. Aware of the 1913 California Alien Law prohibiting aliens from owning property, in December 1915 he purchased the house at 3356 Lemon Street in the names of his three American born children (Mine, Sumi, and Yoshizo).

After defeating a lengthy and challenging court case, the Harada family was evacuated to the Japanese American internment camps in 1942 along with the rest of Riverside's Japanese American community. This was during World War II and the racism and dislike of Japan and its people were at an all-time high. Jukichi Harada and his wife Ken both died in the Topaz Relocation Center, Utah.

Only one of the Harada children, Sumi, returned to the house after the war. Recognizing that so many other Japanese needed to restart their lives, she offered the house to former internees as a place to live until they got back onto their feet. Sumi lived in the house until 1998, when she was 90. She passed away two years later and ownership transferred to her brother. He died in 2004 and his heirs donated it to the city.

As of July 2018, the status of the house is somewhat unclear but it appears to be in very bad shape. An assessment of the house initiated by the Metropolitan Museum Board has been completed or is nearing completion to determine how much repairs would cost.

Bonca, Nicolai. "Historic Harada House at risk of collapse." The Highlander. May 22, 2017.  https://highlandernews.org/29739/historic-harada-house-risk-collapse.