The Ceredo Museum is a local history museum operated by the Ceredo Historical Society. Established in the 1970s, its goal is to "preserve the History of Ceredo for future generations." The museum boasts a wide-ranging collection of artifacts from throughout Ceredo's history, with the Civil War and C-K High School in particular. The museum houses the Ceredo Petroglyph, one of the largest and best-preserved petroglyphs in the United States. There are also many documents, books, photos, microfilms, census records, cemetery listings, and family histories for conducting research. 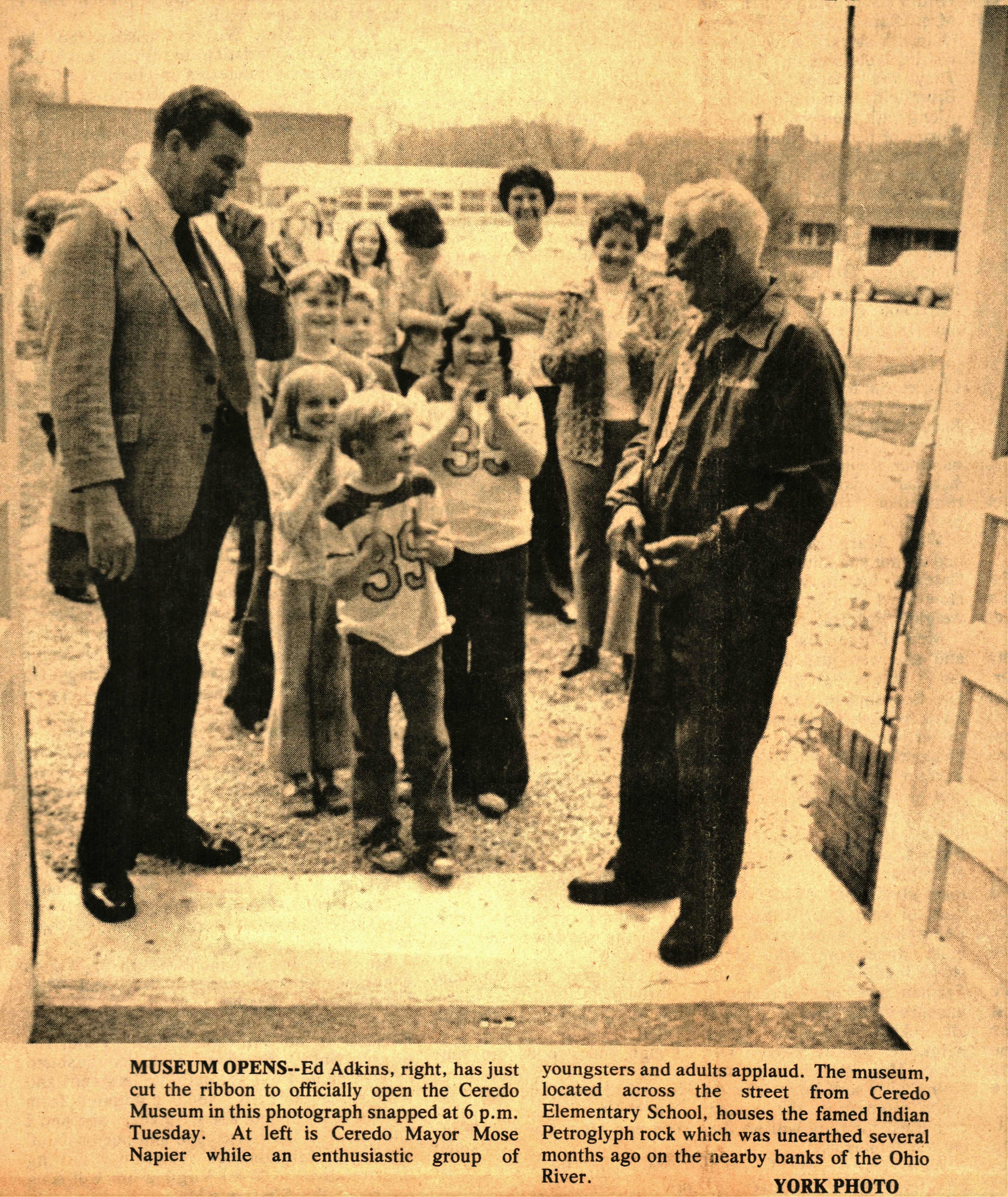 A time capsule was buried in the front lawn in July 1976, and is to be opened in 2076. Courtesy of the Ceredo Museum. 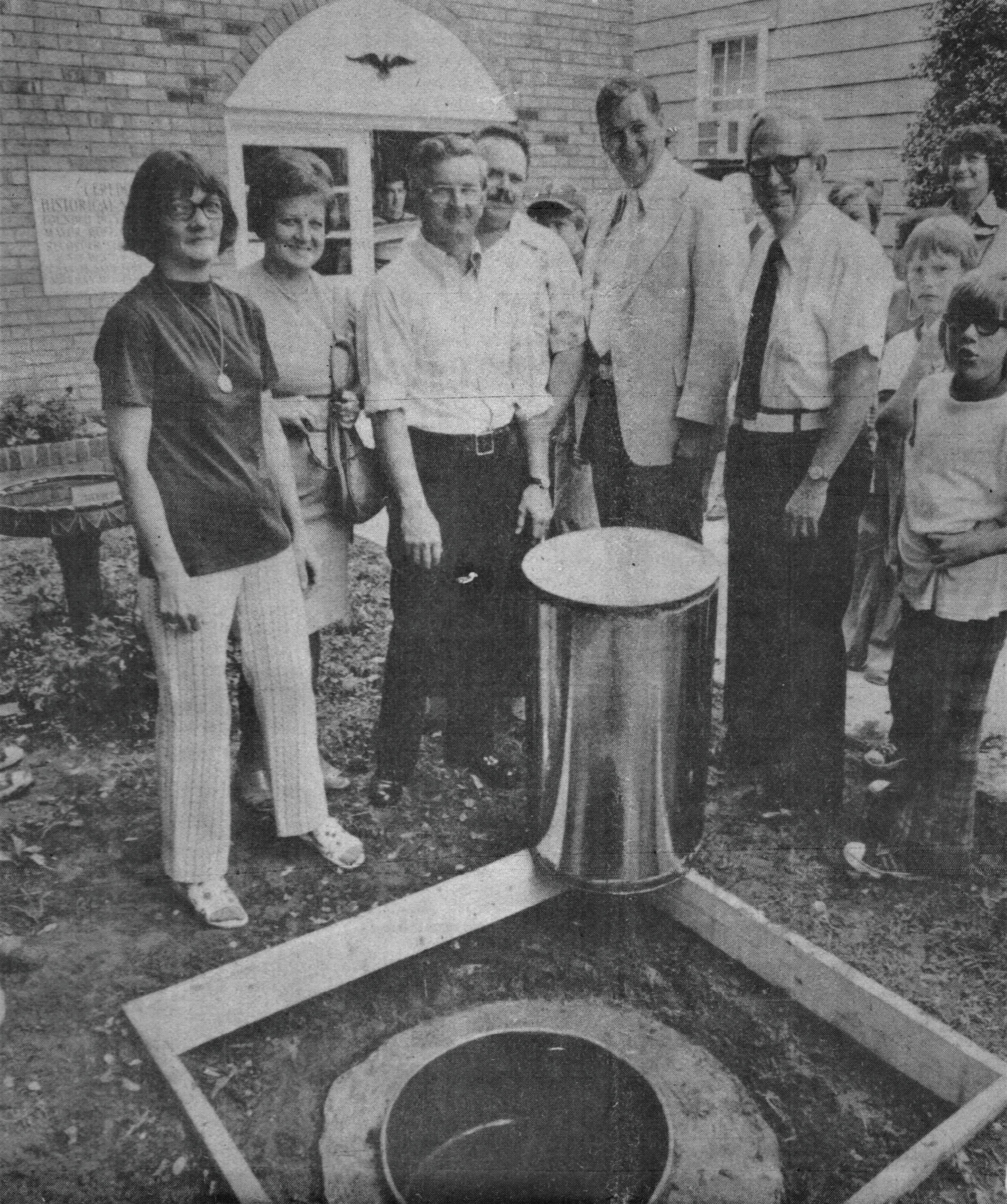 Other items include a large collection of memorabilia from the former C-K High School. 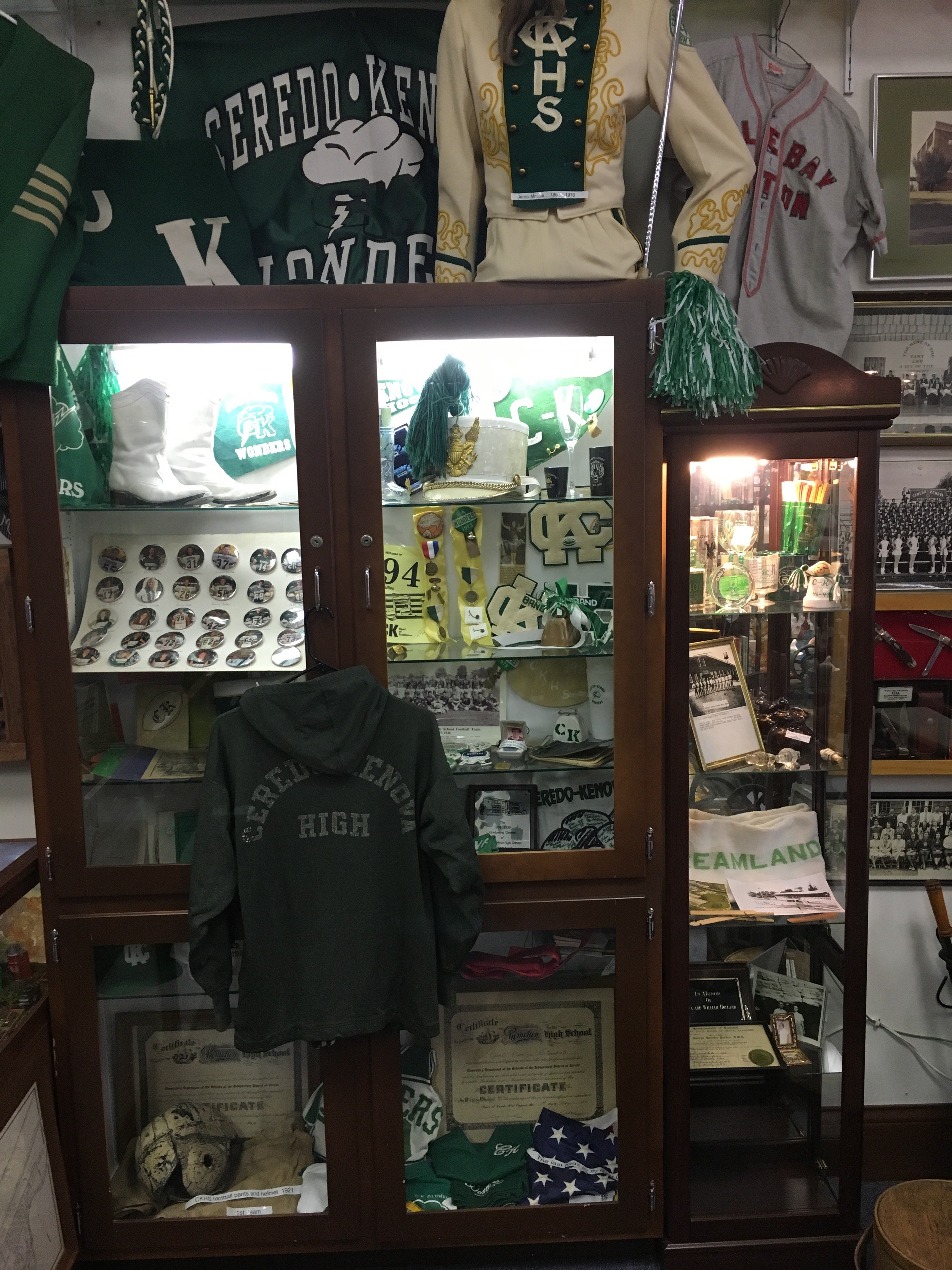 The Ceredo Historical Society Museum has been in operation since around 1975. The current building was constructed in 1995. Image courtesy of the author. 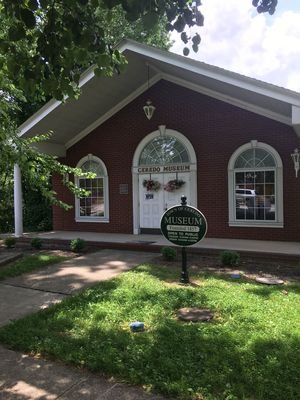 The original museum building was a well house built in the early 1900s by the Ceredo Water and Light Company. It was demolished in 1995. Image courtesy of the Ceredo Historical Society Museum. 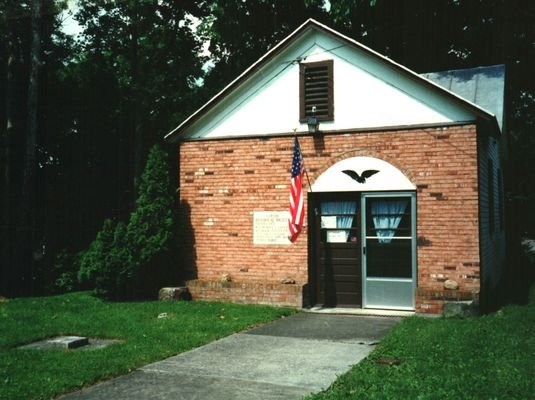 The Ceredo Petroglyph is the museum's most well-known artifact. Image courtesy of the author. 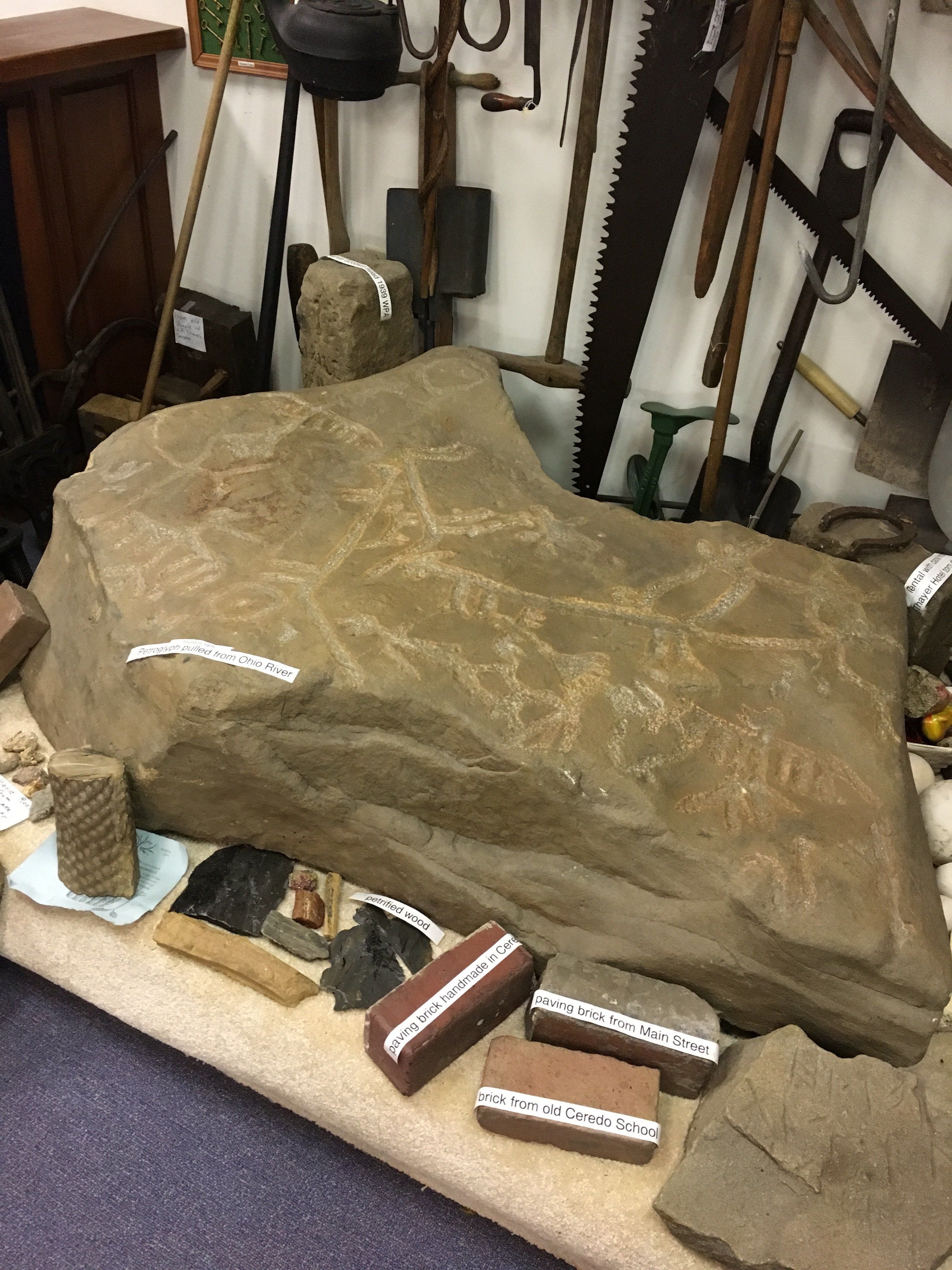 Outside the museum stands a replica cannon honoring a local Civil War regiment, the 5th WV Volunteer Infantry. Image courtesy of the author. 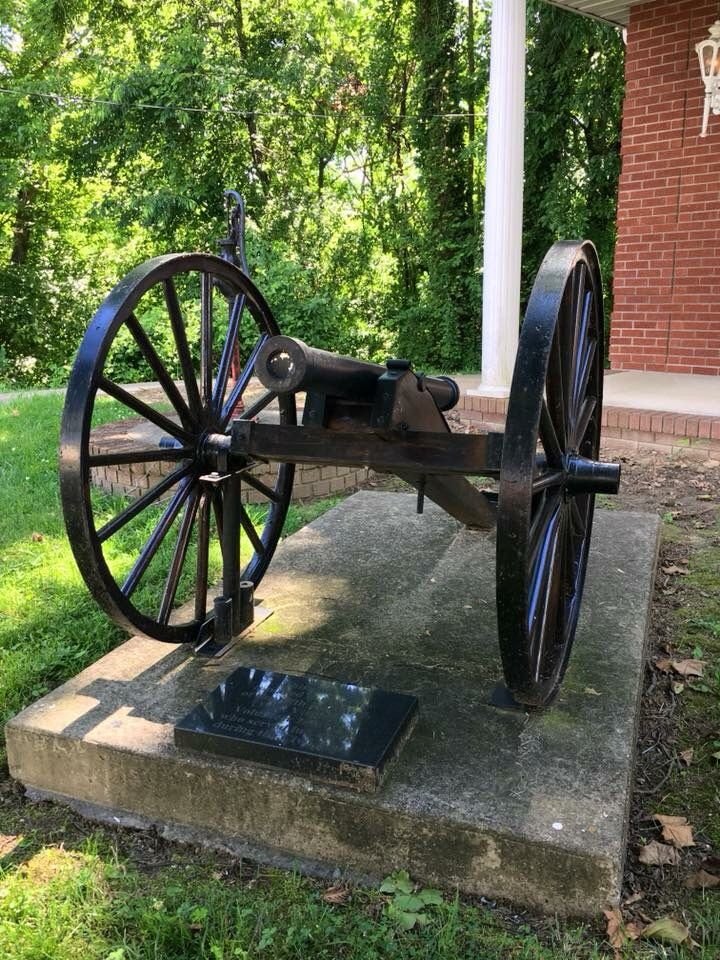 The Ceredo Historical Society was established in the early 1970s during an increase in local community history. This was precipitated by several factors including the American Bicentennial in 1976; the discovery of a cache of nineteenth century documents from the earliest days of Ceredo; and the discovery of the Ceredo Petroglyph. The Society opened the Ceredo Museum in 1975 primarily to house the Petroglyph; over the years its collection expanded thanks to donations and acquisitions.

The museum was originally housed in an old waterworks facility that had been built around 1903 by the Ceredo Water and Light Company. The company had been established by the Hoard family in 1895 to provide a reliable source of water to Ceredo. The building housed steam pumps which drew water from a nearby stream for the town. The company was absorbed in the 1920s and the well house was eventually left vacant before being converted into space for the Ceredo Museum. By 1995 the museum had outgrown the aging building and it was demolished to make room for a larger facility on the same spot. It was paid for through a combination of donations, town funding, and state grants, and constructed with volunteer labor. During demolition the original well was discovered underneath the building’s foundation. It was filled in with concrete after officials decided attempting to preserve it would be impractical.

In 1976 a time capsule was buried in the front yard of the museum in honor of the Bicentennial of the Declaration of Independence. Its contents include photos, documents, and a letter from Mayor Mose A. Napier to the mayor of Ceredo in 2076. Originally a small monument marked the burial spot, but it was covered by a new sidewalk during construction of the new building in 1995. The capsule is buried “about ten feet from the front porch of the Museum and roughly twenty-five feet from the main sidewalk and about two feet inside the sidewalk going into the Museum.” It is intended to be opened on July 4, 2076.

One significant artifact housed in the museum is the Ceredo Petroglyph. It is a large sandstone rock covered in carvings of various images. It was discovered in the Ohio River on June 25, 1975 during excavation by the Oglebay Norton Coal Company to build a new pier. Several entities sought to acquire custody of the stone, but Mayor Mose A. Napier was able to obtain permission from Governor Arch Moore to have Ceredo be allowed to keep it. The stone is one of 27 known petroglyphs in West Virginia. They are believed to have been carved by the Algonquin tribes around A.D. 1200-1690.

The museum contains many other items pertinent to the Ceredo area. There are many artifacts from the Civil War including cannon balls, documents from the 5th West Virginia Volunteer Infantry Regiment, and a sample of hair allegedly from Abraham Lincoln. There is a library of documents, books, and newspaper clippings about local topics, as well as genealogical records. Additionally there is a small collection of glass products from local companies including Pilgrim Glass; items belonging to Z. D. Ramsdell; memorabilia from C-K High School and Marshall University; various yearbooks; military uniforms; microfilm of the Ceredo Advance newspaper; numerous photo albums and scrapbooks; a collection of handwritten journals by Ed Adkins detailing the history of the Tri-State area; and an “N” gauge model railroad layout of Ceredo and Kenova. The museum is open on Tuesdays and Fridays and admission is free.