Located on Fred Taylor Drive, north of Lane Avenue, Jesse Owens Memorial Stadium is the newest addition to The Ohio State University Department of Athletics' aggressive campaign to upgrade and build state-of-the-art facilities for competition (1). The Jesse Owens Memorial Stadium is a 10,000 seat facility that is currently used by the track, soccer, and lacrosse teams of The Ohio State University. Jesse Owens was a track star while a student at OSU and he also won four Olympic gold medals. 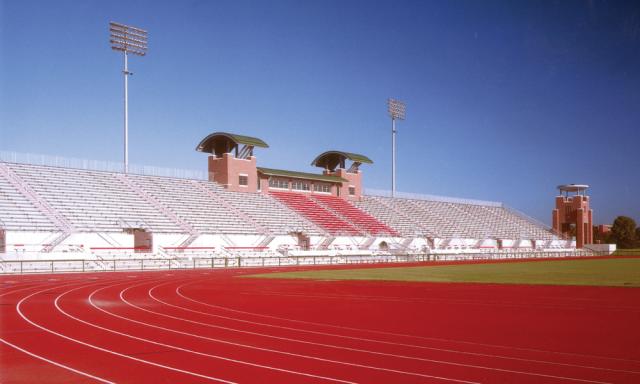 In 2001 the Jesse Owens Memorial Stadium was completed.  It was necessary to build this facility because the original track, the one on which Owens had run, located within Ohio Stadium, was removed during stadium renovations. The renovation involved lowering the playing field in order to add seats.  The stadium includes two tribute towers to Owens(1) .

James Cleveland Owens was born in 1913 in Alabama. His family moved to Cleveland, Ohio when he was a boy. When he was in about third grade his teacher asked him his name. He responded "J. C." Because of his southern accent she mistakenly thought he said Jesse. He went to East Tech high school in Cleveland and equaled the world record of 9.4 seconds in the 100 yard dash. He attended college at Ohio State. On the track team there he won a record of eight individual NCAA championships, four in 1935 and four in 1936(1)

At the Olympics, he competed and won gold in the following: the 100 meter dash, the 200 meter dash, 400 meter relay, and the long jump. While Hitler preached Aryan supeiority, Owens credited the help of his German opponent, Luz Long, with giving him advice on how to not foul out of the long jump trials. Owens had fouled twice and Long suggested laying a towel a foot from the foul line to help him jump sooner. He and Long went on to be friends (1)

Even with his athletic abilities, as a Black man Jesse had always faced discrimination and difficulties. He tried several businesses and coaching. He later found success as a speaker. He died of lung cancer in 1980 (1)