Built as a joint effort of the Cherokee Strip Historical Society and the Oklahoma government in 1968, the Cherokee Strip museum seeks to preserve and document the history of the "Cherokee Outlet." This northwestern area of Oklahoma was originally designated as a guarantee of a "perpetual outlet west" for the Cherokee and other Native American tribes living there. However, when the government disallowed all leasing of the land by the Cherokee, essentially forcing the Cherokee to sell by the removal of their primary source of income, the Cherokee caved in and sold the land to the government in 1893. This act precipitated the largest land run in history. Today the museum documents Native American history, the history of the land run, and pioneer history.

A Day at Rose Hill School 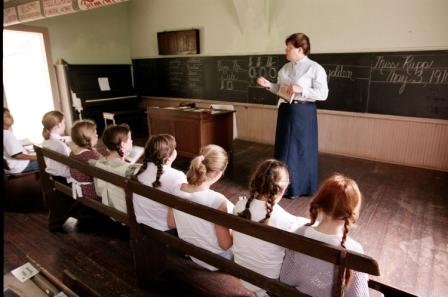 Following the Cherokee Nation's removal from the East Coast states, the federal government gave the Cherokee an area in western Oklahoma for settlement and a second area, referred to as the "Cherokee Outlet" for travel and hunt. The aim of the land was to guarantee a permanent passage to the wider "West" for the Cherokee (and other nations that eventually settled around the Cherokee).

Following the Civil War, Texan cattleman would drive their herds to Kansas to sell to the North. Cherokee were able to lease their grasslands to these traveling cattlemen and thus earn a significant income off of the Outlet. Originally, in a five year lease, the Cherokee earned $100,000 per year by leasing the land to the Cherokee Strip Livestock Association. At the end of the five years, the Cherokee reopened the land for further bidding, with the Cherokee Strip Livestock Association once again gaining rights to the land, but this time at $200,000 a year.

Congress, however, had other plans and nullified the agreement in March, 1889. Instead, Congress authorized the sale of the land at $1.25 per acre. The Cherokee protested fiercely, as they had already rejected an offer by the Livestock Association to buy the land at $3.00 an acre. Congress was forcing a sale significantly below market value.

Initially, the Cherokee resisted the sale, but President Benjamin Harrison forbid all grazing of cattle in the land after October, 1890. This act eliminated the Cherokee's essential income from land leasing. The following year, the Cherokee agreed to sell the land at a price that ranged from $1.40 per acre to $2.50--all significantly below the original asking price.

When the land finally opened to the pioneer public on September 16, 1893, many had been camping waiting for the land for months on end. When the gun fired at 11:55 a.m., to announce the opening of the land, more than 100,000 pioneers raced for the 40,000 homesteads and town parcels of land. It was a steady stampede as pioneers raced on foot, horse, and by wagon to make claim of some piece of land.

Today the museum tells this story, as well as shows the lives of the pioneers who eventually settled on the land. One piece of the museum that has gained many awards and national attention is the living history "A Day at Rose Hill School," where fourth graders from around the state can spend a day in a one-room school house, much the same as children around the turn of the 19th century would have.

Tuesday - Friday, 9 am to 5 pm Saturday 10 am to 4 pm Closed Sunday, Monday, and State Holidays