The 132-acre Centennial Park has been called "Nashville’s premier park." It is also the city's oldest and most visited park. The area, which began as a farm and became, briefly, a racetrack, was designated as the site for Nashville's historic centennial (1897), and then redesigned as a full-scale park in 1903. Major enhancements have since been added, such as, in addition to the famous Parthenon (which see), a walking trail, the Centennial Art Center, a sunken garden, a band shell, sand volleyball courts and two dog parks. Many special events, such as the Nashville Shakespeare Festival, take place there. The park was added to the National Register of Historic Places in 2008.

An aerial view of Centennial Park 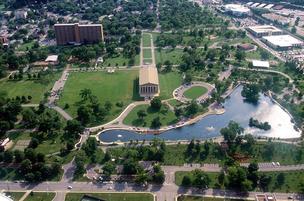 A quiet view of Centennial Park 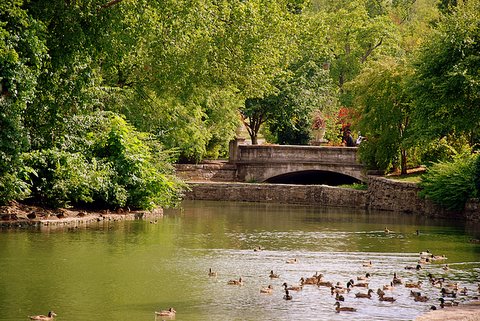 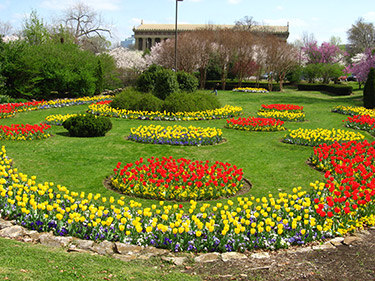 The site on which Centennial Park now stands was originally a farm, purchased in 1783 by John Cockrill, brother-in-law of Nashville’s co-founder, James Robertson. After the Civil War, the area was the state fairgrounds, and from 1884 to 1895, it became a racetrack called West Side Park. In 1895, construction began on the site for Nashville’s centennial, which was finally opened to the public in 1897; after the event ended in October of that year, The Parthenon was one of the few exhibits left standing. The site was opened as a park for the first time in 1903: Gilbert & Sullivan operettas began to be heard there. In 1911, the Centennial Athletic Field was added, and in subsequent years purchases of residential properties as well as other acquisitions expanded the park area until it reached its present size. The Centennials Arts Center first appeared in 1972.

The Centennial Park Master Plan was approved in 2011, which will result in the major development of two areas within the park: 1) the Cockrill Spring Zone, a revival of the historic Cockrill Spring that existed when the site was still farmland, and 2) the Parthenon Zone, consisting of the area between the Parthenon and Lake Watagua. Among many other additions, an entry plaza and a formal events lawn will be added to the Parthenon Zone when construction is completed.

Many cultural events are associated with the park.The climactic scene of one of director Robert Altman’s most celebrated films, Nashville (1975), was filmed there. The first Shakespeare in the Park production took place in 1988 and, by the following year, The Nashville Shakespeare Festival was fully established. Soon after, the festival developed an educational outreach program for the public schools, and later adult programs and other services were added. In the summer of 2015, the festival will be presenting Shakespeare’s famous history play Henry V, but with a little Nashville history thrown in, as the actors will represent American Civil War soldiers putting on a 19th Century production of Shakespeare's play.