In the early 19th century, the "Rural" Cemetery Movement arrived in the U.S. from France and England. This movement, which emphasized placing cemeteries away from the hustle and bustle of the city, influenced the landscape of the Lake View Cemetery, which opened in 1869. The cemetery is the burial site for some of Cleveland's most notable residents, including John D. Rockefeller, Eliot Ness, and Charles Bush. It is also home to the James A. Garfield Monument remembering the late president (in office March 4, 1881-September 19, 1881) who was born in what is now Moreland Hills, Ohio, and serving as his final resting place. In addition to its history, Lake View Cemetery is also known for its architecture, sculptures, and monuments throughout its nearly 300 acres.

John D. Rockefeller and numerous other notable figures in American history, including James Garfield, are buried in Lake View Cemetery. 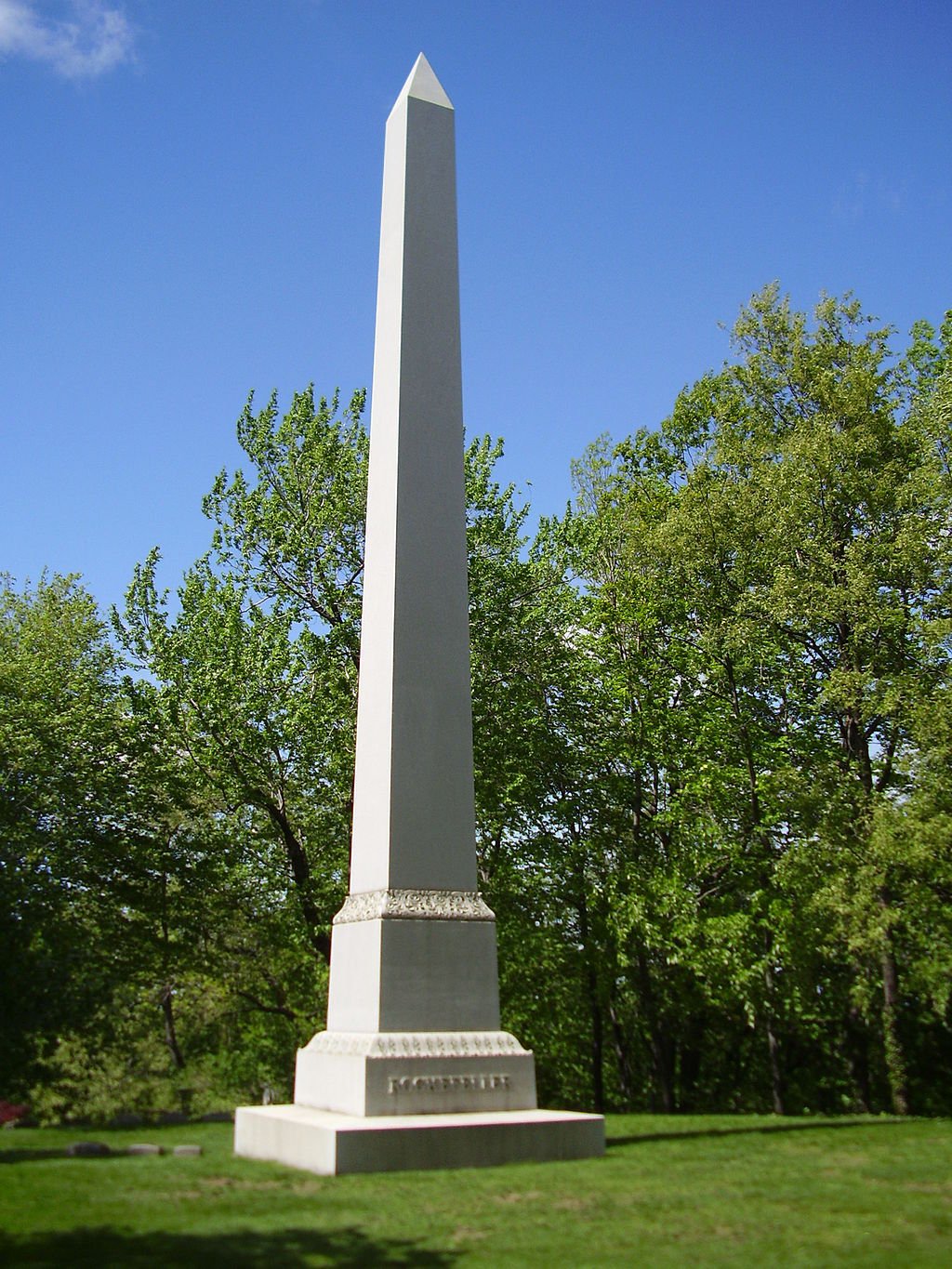 The James A. Garfield Memorial, build in honor of the 20th President, is listed on the National Register of Historic Places. 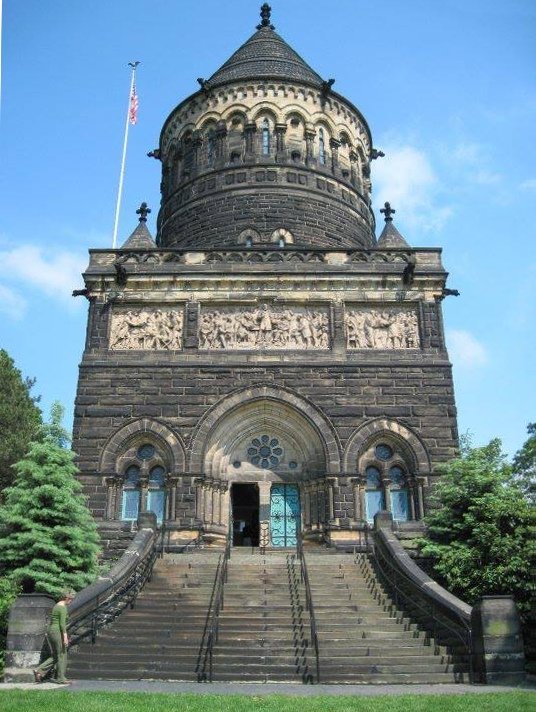 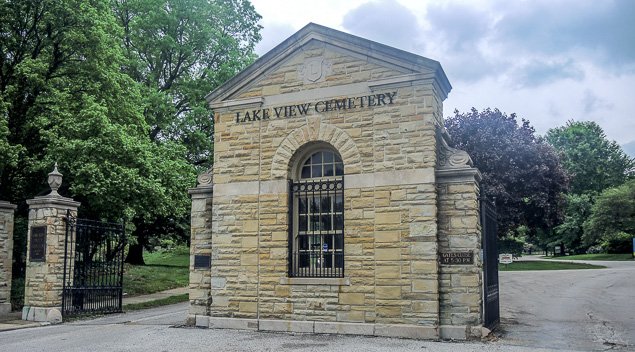 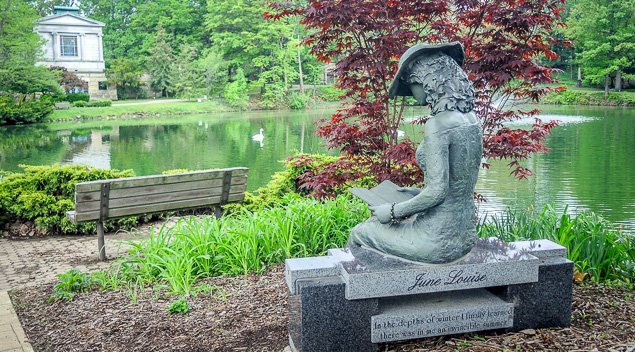 In 1869, a group of Cleveland citizens led by Jeptha H. Wade purchased 200 acres of land for $73,000 that would become Lake View Cemetery. The group came to be known as the Lake View Cemetery Association, and Wade was their first president. They were looking for a place farther away from the in-town grave sites that were common at that time, where there would be less noise, pollution, and vandalism. The Cemetery’s very first burial would be the following year, on August 25th 1870 when 31 year old Civil War veteran Captain Louis Germain DeForest became the first of 895 Civil War vets to be laid to rest here.

Lake View Cemetery was inspired by the rural garden cemeteries of 19th century France and England, and modeled after an 1831 Boston cemetery located on the edge of Cambridge – the first garden cemetery in the United States. Contrary to previous cemetery designs, garden cemeteries were built on the Romantic idea that beautiful resting places eased the pain of death. Lake View Cemetery was designed by landscape gardener Adolph Strauch who emphasized a uniform landscape throughout by incorporating uniform lot sizes, restrictions on the heights of monuments, and prohibiting fencing. Lake View was not just to be a cemetery, but also a “museum, arboretum, bird sanctuary, park, historical archive, and landmark.” Although it was originally intended for Cleveland’s elite, Lake View Cemetery began lowering the prices of their plots in the 1890s, which allowed for rapid expansion of the cemetery from the 1890s through the 1920s.

From 1903 to 1958, German nurseryman  Ernst Muny was put in charge of botany and flower planting at Lake View Cemetery. Among the notable horticulture exists what are known as the Moses Cleaveland trees. These are trees that were around when Moses Cleaveland landed on the shore of the Cuyahoga River in 1796 and include a White Oak, two Grand Tuliptrees, and an American Beech. Lake View also has two State Champion Trees – a Chestnut Oak and a Sweetbay Magnolia, a collection of Japanese Maples, and what used to be the largest Weeping Canadian Hemlock in the United States. The tree lost this status in 1996 when a large branch on its right side collapsed under the weight of snow from the 1996 snowstorm.

·         James A. Garfield Memorial  – The James A. Garfield Memorial opened on Memorial Day of 1890. Deisgned by architect George Keller, the monument to the 20th President of the United States stands 180 feet tall and is made of Berea sandstone. It combines Romanesque, Gothic, and Byzantine architectural styles. The interior of the monument has five terra cotta panels created by Casper Bubel depicting important moments in Garfield’s life – his profession as a teacher, as Major General in the Civil War, as an orator, taking the oath of office, and lying in state in the rotunda at the Capital in DC. Other featured décor includes gold mosaics, colored marble, stained glass windows, and red granite columns. The stained glass represents the thirteen original colonies plus Ohio, as well as War and Peace. In the center stands a large statue of Garfield by sculptor Alexander Doyle. Notably, visitors to the James A. Garfield Memorial can see forty miles of the Lake Erie shore from its outdoor balcony. It also is unique in that it contains the only full presidential casket on display in addition to the casket of Garfield’s wife and the ashes of his daughter Mary (Molly), and son-in-law Joseph Stanley Brown.

·         Wade Memorial Chapel – The Wade Memorial Chapel was constructed in memory of Lake View Cemetery’s founder, Jeptha H. Wade. The interior is designed by Louis Comfort Tiffany and local architects Hubbel and Benes designed the exterior in a Neo-Classical style. The theme of the interior is “The Voyage of Life”. The West Wall of the chapel depicts stories in mosaic of the Old Testament, while the East Wall shows the birth of Christianity; both were designed by Frederick Wilson. The main stained glass window is known as the Flight of Souls and shows the consummation of the Divine Promise. This Tiffany piece won the gold medal during the 1900 Exposition Universelle in Paris. Wade Memorial Chapel is listed on the National Register of Historic Places.

Lake View Cemetery is still actively accepting to burials today, and to date over 110,000 people have been interred here.