The Civil War had just ended and thousands of recently released Union POW’s from prisons such as Cahaba and Andersonville were anxious to return home. Unfortunately, these veterans and their fellow passengers became victims of the worst maritime disaster in American history when the Sultana exploded on April 27, 1865. An estimated 1700 to 2300 lives were lost as a result of the explosion and several hundred more would have likely perished had it not been for the actions of the crew of another vessel traveling along the Mississippi River. This memorial to the victims was dedicated on July 4th, 1916 in Knoxville's Mount Olive Cemetery.

Sultana launching on it maiden voyage. 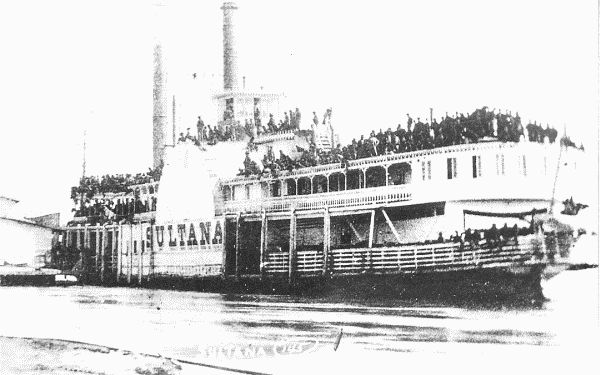 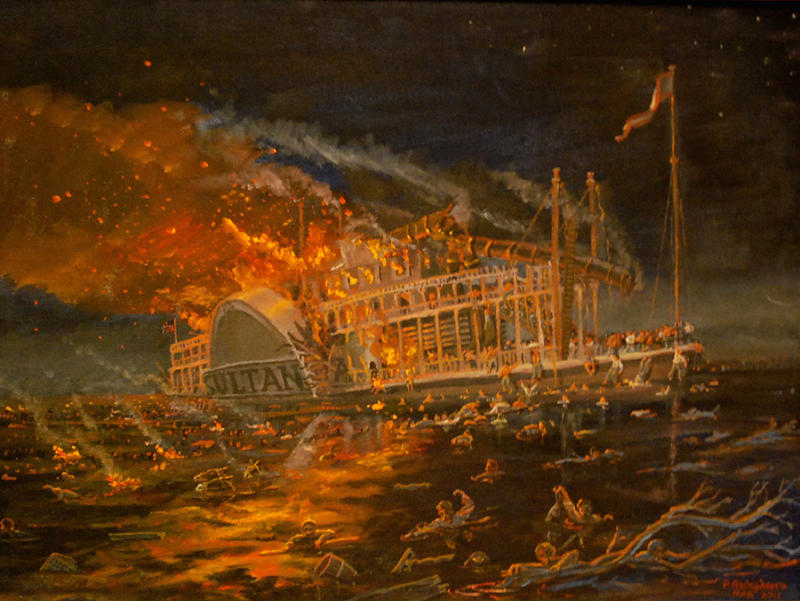 This memorial to the victims was dedicated on July 4th, 1916 in Knoxville's Mount Olive Cemetery. 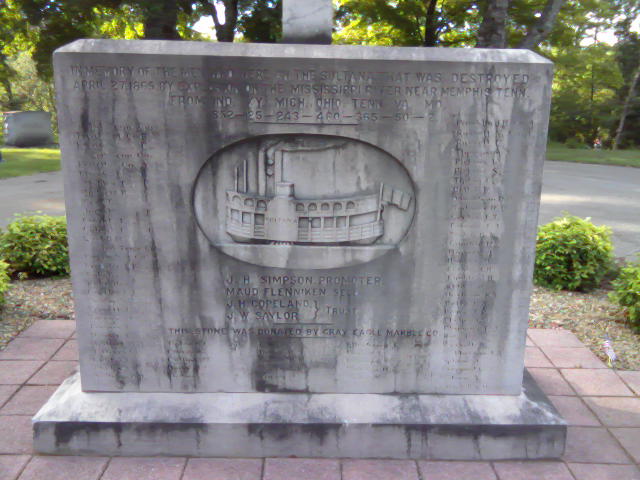 The Sultana was a typical side wheel, coal burning steamer. The vessel was built in 1863 and made numerous trips up and down the Mississippi between New Orleans and Saint Louis transporting cargo and military personnel. As the war ended, the Sultana was commissioned to move former prisoners, troops, and civilians back to their homes in the North. Disastrous boiler explosions had once been the cause of hundreds of deaths each year, but Congressional legislation led to required safety inspections and river travel had become much less dangerous by the time the Sultana made its maiden voyage.

These new safety standards were only as effective as the crews that inspected vessels and at the end of the war, there was a strong financial incentive to make as many trips as possible in order to take advantage of federal payments for transporting soldiers. As a result, the crew and captain made a decision to patch rather than repair the Sultana's boilers while transporting former prisoners of war.

The final voyage of the Sultana began in New Orleans on April 21, 1865 with about 200 passengers and assorted cargo. While traveling upstream to Vicksburg, the engineer discovered leaks in the boilers. The Sultana docked in Vicksburg on April 24th and repairs were made to the boilers while 1800 to 2000 additional passengers and 60 mules and horses were boarded onto the vessel which was originally designed to carry 376 passengers. The large number of passengers is a result to hundreds of men cramming their way onto the vessel given their eagerness to return home and the willingness of captains and crew to overload their vessels. Many of the men had survived a long period in prisoner-of-war camps and an accurate accounting of the men who were on board was never completed.

As the steamer made its way north up the Mississippi, the boilers began to leak once again and the crew decided to stop for repairs in Memphis. Believing that the patch added in Memphis would seal the boilers while recognizing that stopping for a complete repair would result in his passengers being transferred to another vessel, Sultana captain J. Cass Mason made a fateful decision and resumed the journey towards Cairo, Illinois. The Sultana failed to reach the destination as the overloaded boilers exploded around 1:00 on the morning of April 27, 1865.

The explosion occurred approximately seven miles North of Memphis and the blast tore the center out of the steamer. In seconds, many of the passengers were injured by scalding-hot metal while the force of the explosion threw others into the dark, frigid, and fast moving current of the Mississippi. Survivors of the immediate blast remained trapped on the burning and collapsing ship. The steamer Bostona happened upon the scene of the disaster and her crew and passengers were about to save several hundred souls. The remaining 1500-1800 soldiers and civilians lost their lives.

Despite the scale of the disaster, the explosion of the Sultana has received little attention from historians owing to the four years of war that preceded it. At the time, the disaster was also overshadowed by the news of the war's end and the assassination of President Lincoln which occurred less than two weeks prior. A military commission was appointed to investigate the tragedy and determined that the cause of mismanagement of the water levels in the boiler and faulty repairs caused the explosion. The captain of the Sultana survived the disaster and never faced charges.

The Mississippi River is constantly changing its course which has made it difficult to determine the precise location of any remains of the vessel. However, parts of the Sultana were discovered in 1980’s buried under several feet of mud in an empty field nearly two miles from the river.