The James Lick Baths was built in 1890 as a free public bath house for the working class, many of whom had no bath facilities in their residecnes. Due to an earthquake and fire, the original structure had to be rebuilt in 1906, however the Richardsonian Romanesque style of the original bath house was not incorporated into the new design. Instead, the new structure was inspired by the Renaissance Revival style, which was more popular at the time of its reconstruction. James Lick Baths continued as a bath house until 1919, when it was sold and became the People's Laundry, founded by Matsunosuke Tsukamoto, one of San Francisco's most prominent Japanese-Americans. The building became an office in 1973. Today, the ground floor of the building is home to an architectural firm. 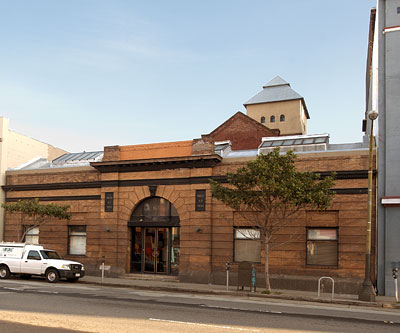 The eccentric James Lick, once the richest man in California. Evidently somewhat capricious with his wealth, he eventually left nearly all of it to build the Lick Observatory and other institutions for public good. 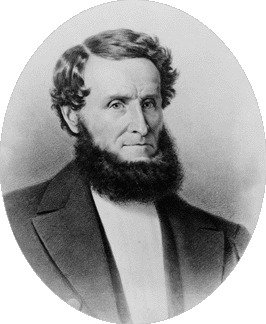 The original James Lick Baths prior to the 1906 earthquake. Much of its tall tower, which pressurized the water system necessary for its 60 baths, is hidden by the entrance from this angle (User eric, Flickr). 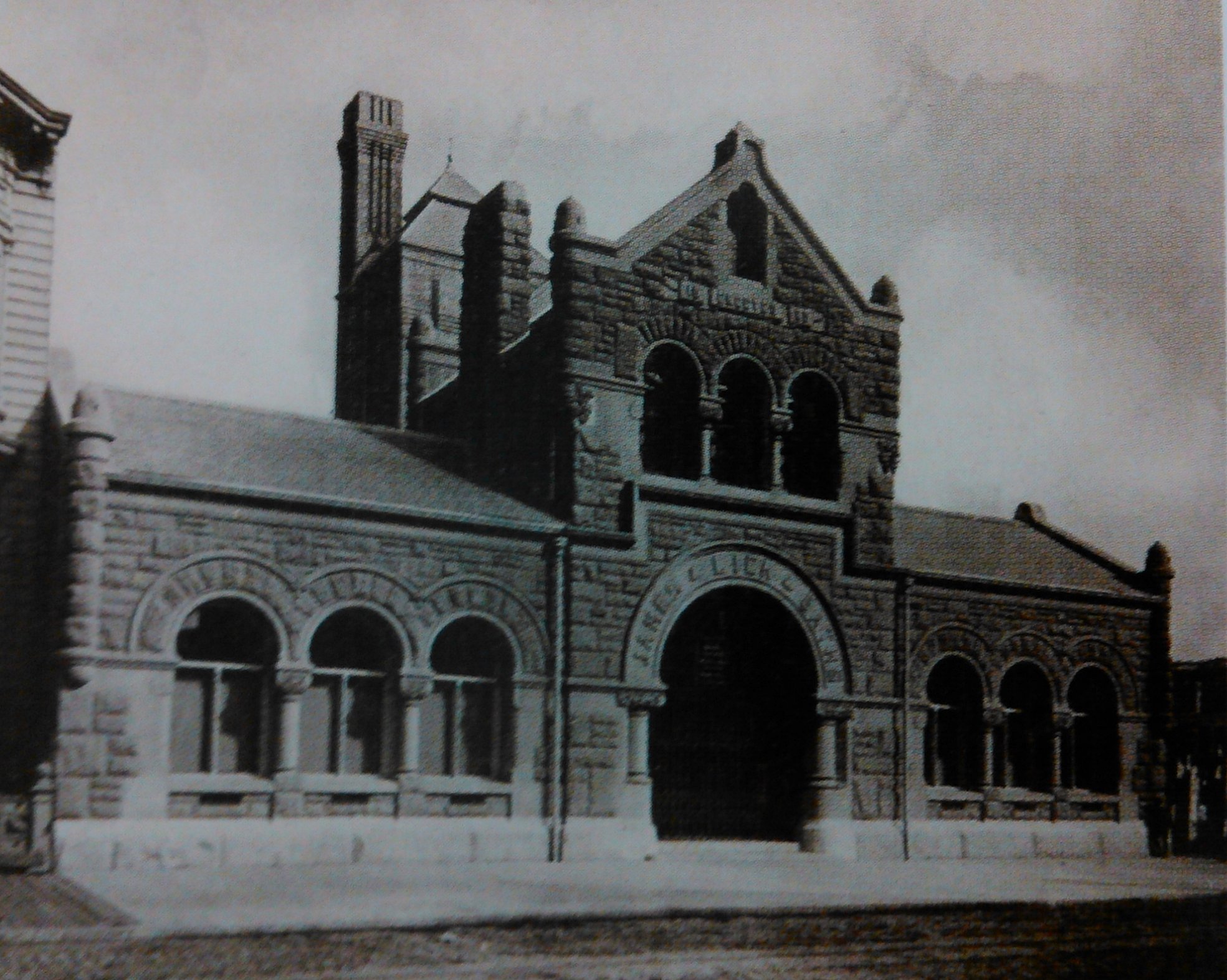 The ruins of the Baths shortly after the earthquake (UC Berkeley, Bancroft Library). 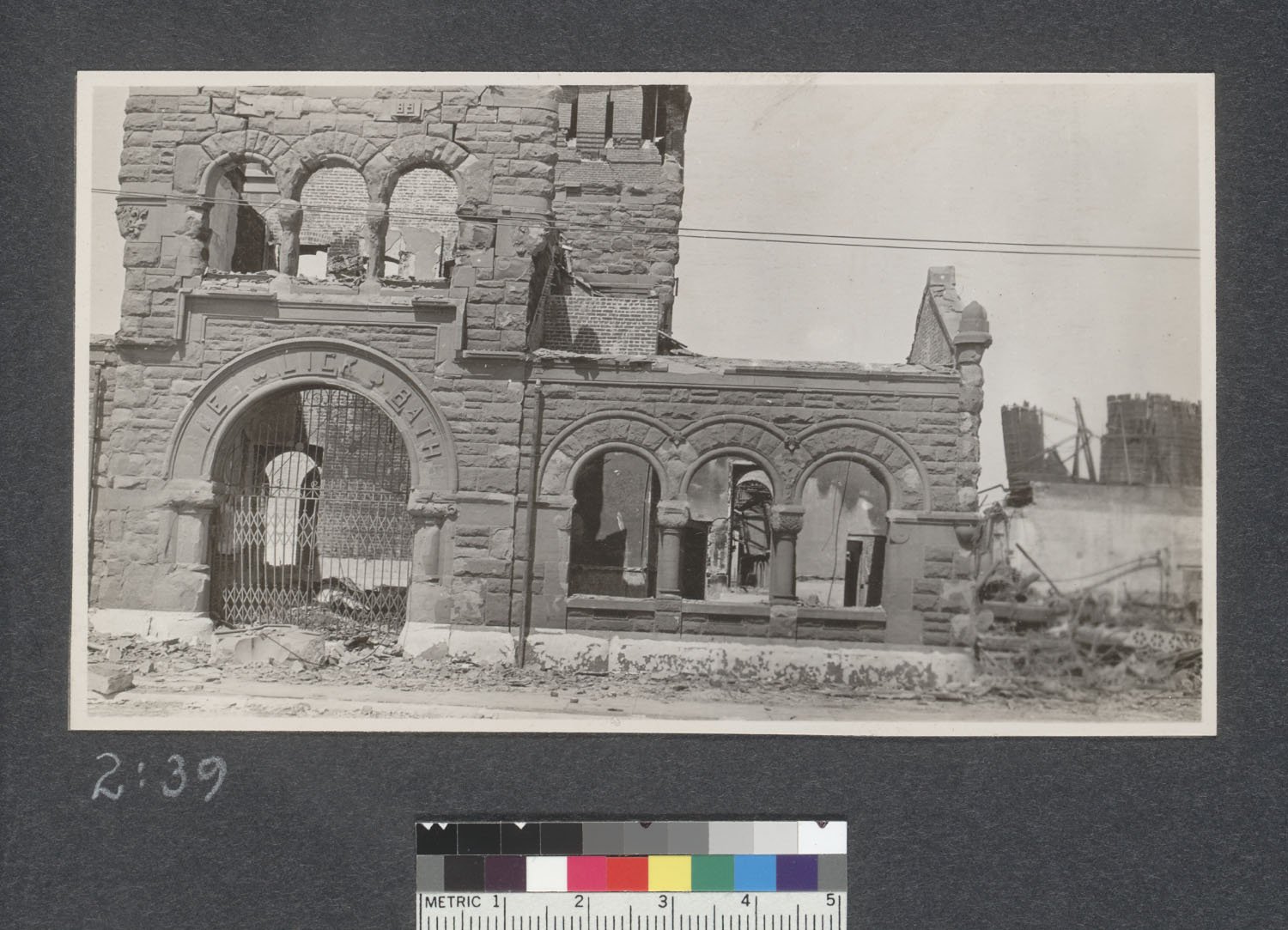 A fuller view of the damage caused by the quake. The Baths were rapidly rebuilt with the same floorplan, but the architectural style was altered to suit the tastes of a new era (UC Berkeley, Bancroft Library). 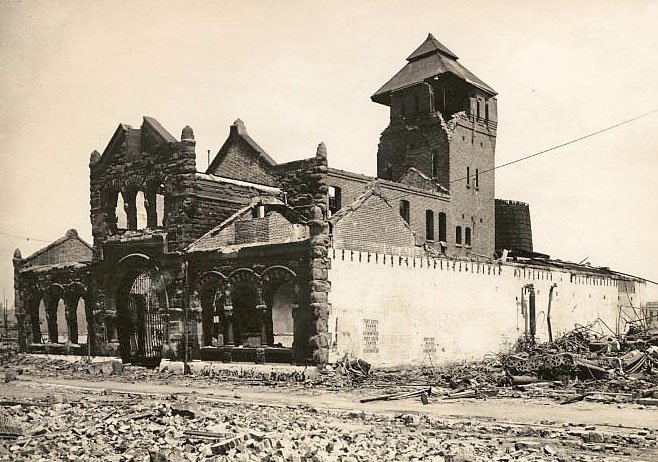 On January 16, 1891, the San Francisco Call newspaper reported the new charge that customers of the Baths, previously free, would need to pay for use. The decision was initially, understandably unpopular. 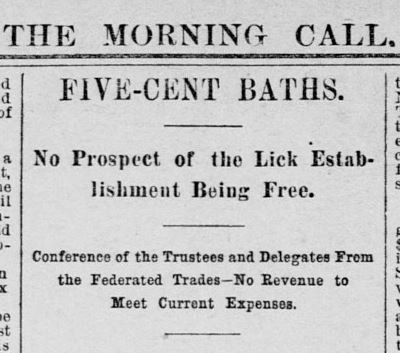 Public disapproval of the "price hike" at the Baths was evident a few days before the position was made permanent, when a resolution from the Federated Trades council condemned the choice. 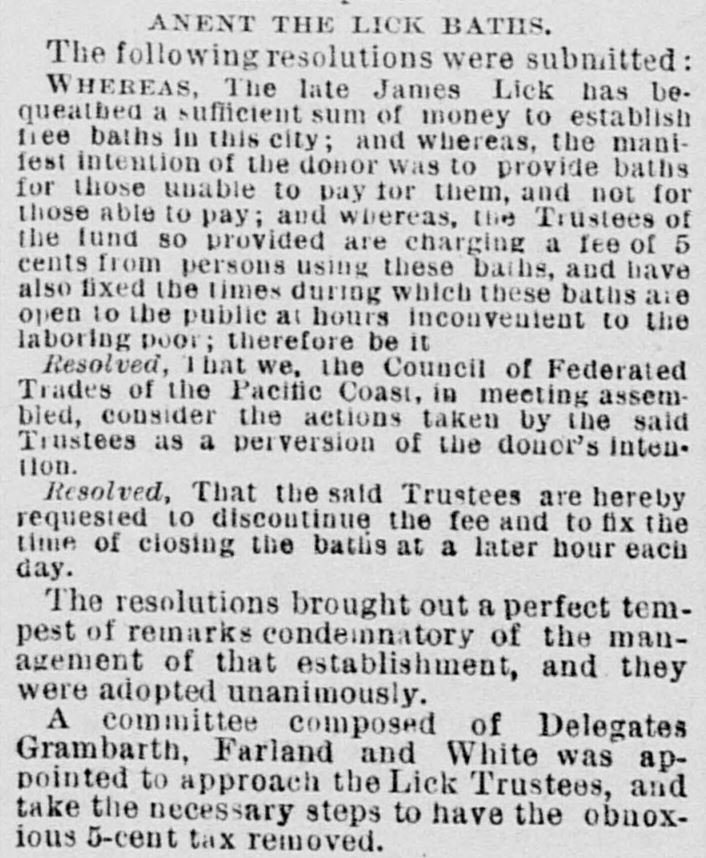 Keitaro Tsukamoto (seated center) served in the U.S. Army in World War I. Despite his service, he was imprisoned along with his family during World War II. Luckily, the People's Laundry was restored to the family in 1946 (San Francisco's Japantown: Arcadi 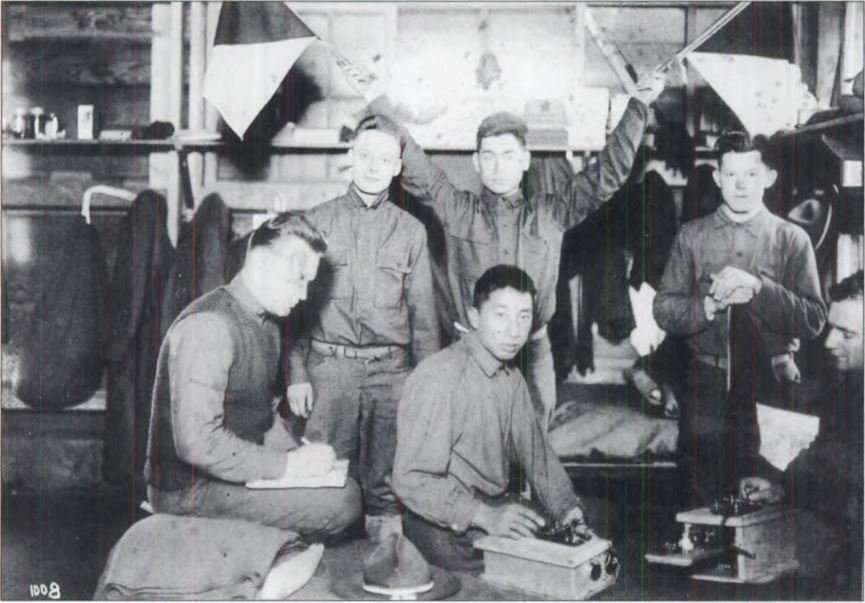 James Lick Baths was named after James Lick, a prominent San Franciscan and at one point California's richest man. Born in Stumpstown, Pennsylvania in 1796, Lick was the son of a skilled carpenter, and soon mastered the trade himself as his father's apprentice, in which capacity he began working at the age of 13. At 21, however, he caused a scandal when the daughter of a wealthy local miller, Barbara Snavely, became pregnant with his child. When Lick asked to marry the woman, her father refused, telling the young lad, "When you own a mill as large and costly as mine, you can have my daughter's hand, but not before." Lick later made good on a promise to "own a mill that will make yours look like a pigsty," when he started the largest mill in California in Santa Clara 37 years later.

Lick left Pennsylvania and settled in Baltimore for a short time, learning the delicate craft of piano making. In 1821 he moved to New York to open his own shop and found great success. When Lick discovered that his pianos were being exported to South America he closed his shop and moved to Buenos Aires to be as close to the market as possible. Lick was determined to become a success. In the thirty years that he spent in South America his piano shop thrived and he became involved in the profitable fur trade. However, he longed to return to North America. He set his eyes on what would soon become California and in 1847 he packed up his shop and set sail.

When Lick arrived in San Francisco he began to buy large portions of land with the money he had made for himself in South America. Instead of investing in the Gold Rush along with the majority of California's residents during the second half of the nineteenth century, Lick made the wise decision to invest in land, buying up large plots in San Francisco and San Jose. His fortunes increased still further as he began to sell produce grown on his extensive properties, and still more when he opened Lick's Mill in 1855 and then Lick House, a grand hotel, in 1861. As he grew into his millionaire status he followed a trend popularized by other wealthy Americans: investing in a conservatory for his estate. However, before his death in 1871, he had only made efforts to purchase the materials needed for such an undertaking, and they remained in crates for almost a decade.

While on his deathbed Lick arranged for his great fortune to be put toward the public good. He prepared a number of endowments for orphanages, homes, foundations, monuments, and a public bathhouse. In 1890, the James Lick Baths was constructed and opened for public use--a great asset to the city as hot baths were a luxury reserved for wealthy residences at the time. Two wings arranged by gender offered baths drawn from a 10,000-gallon, boiler-heated tank: 40 baths for men and 20 for women. Its architecture was a style popular at the time, known as Richardsonian Romanesque (named for its founder, Henry Hobson Richardson, architect of Trinity Church in Boston). The style was a revival of Roman-inspired architecture from across 11th and 12th Century southern Europe, often featuring square towers, conical roofs, and round-topped arches.

Unfortunately, the original structure was severely damaged in San Francisco’s devastating 1906 earthquake and the fire that followed. It was rebuilt in a new architectural vogue, Renaissance Revival, and reopened as quickly as possible. Poorer residents within a half-mile radius comprised the greater share of the Baths’ clientele both before and after the earthquake. It remained one of only five public bathhouses in the area from 1906 to 1920. At first, the baths were free, but the city had spent $125,000 of Lick’s $150,000 bequest to purchase land and build the grandiose structure, leaving little remaining funds to cover operating costs. Within months, a 5-cent fee was imposed (at a time when most workers’ daily wages were $2.00 to $2.50 a day). Trustee John O. Earl stated,

“This is a fine bath, it is good enough for anybody, for you or me. It is intended for poor people, but it is not intended for tramps. At first there were boys and hoodlums who threw soap and acted like wild Indians. There were also men who slept in the tubs and dirtied things in ways that would offend you to describe. We furnish...anything you can get at the Palace Hotel. … The charge has kept the place decent.”

In 1919, the Baths were closed due to financial hardship and underuse--technological improvements in plumbing and construction allowed bath facilities to be incorporated more frequently into apartments and homes, and public baths were no longer in demand. Its large boiler and abundant plumbing would still be useful, however, as in 1920 it reopened as The People’s Laundry.

Operated by the Tsukamotos, the People’s Laundry became an important community touchstone for other Japanese immigrants for decades. Matsunosuke Tsukamoto, the family’s patriarch, was one of the first Japanese immigrants to California. His son Keitaro served in the U.S. Army in France and Belgium during World War I. So essential were the Tsukamotos and their establishment to the vitality of the Japanese-American community that Matsunosuke spent several months touring Japan in 1936, speaking to politicians, journalists, and bureaucrats in a desperate bid to reel back Nisei (second generation Japanese-American citizens) who had returned to Japan to escape prejudice and legislation targeted at them in the United States in the 1920s and 1930s.

Numerous anti-immigration laws and prejudices affected the People’s Laundry--the Tsukamotos had already moved their business once and changed its name (from Sunset Laundry), even going so far as to having a Caucasian owner signed onto the business, since many Asian-American immigrants were prevented from owning property. By the time he was able to purchase the former James Lick Baths, Matsunosuke had challenged a law preventing Asian immigrants from operating steam laundries all the way to the Supreme Court (and lost) and been jailed over fifty times for continuing to operate his steam laundry illegally in the meantime. Since the Baths were built of stone, the Tsukamotos were finally able (with a white owner on paper) to operate their laundry without city inspections.

The People’s Laundry miraculously survived the internment of Japanese-Americans during World War II, during which thousands of American citizens of Japanese descent lost their farms and businesses. In 1944, the Tsukamotos were also rounded up and sent under guard--even Keitaro, who had served his country in the previous war--to a camp at Topaz, Utah. The business was restored to them in 1946 when they returned and remained in the hands of the Tsukamotos until 1973, when it was sold and converted into office space. Today, the historic building is still in private hands. It became San Francisco Designated Landmark number 246 in 2004.