The Dutch Windmill was built in 1902 to capture westerly winds coming from the Pacific Ocean and use their energy to power Golden Gate Park's irrigation system. The windmill was so useful that in 1905 it inspired the construction of the Murphy Windmill in the park's southwest corner. As motorized pumps were introduced in the early 20th century the use of structures such as the Dutch Windmill began to decline. After years of failing to be cared for properly, the Dutch Windmill was almost unable to continue functioning. After campaign for it's restoration was successful, the Windmill was restored in 1980, and today it sits in the Queen Wilhelmina Tulip Garden in Golden Gate Park.

The Dutch Windmill and the Queen Wilhelmina Tulip Garden 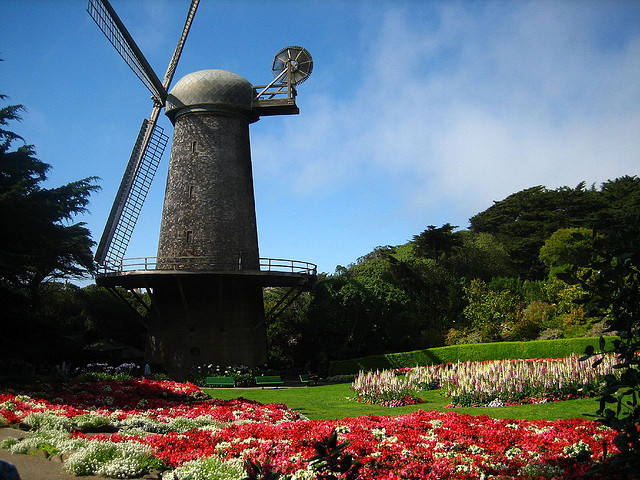 In 1901 San Franciscans John McLauren, Adolph B. Spreckles and Reuben Lloyd went to the Recreation and Park Commission and persuaded them to construct a windmill that would pump water for Golden Gate Park's irrigation system. The structure was designed by a well-known San Francisco resident, Alpheus Bull, Jr. In 1902 the Dutch Windmill was built in the northwest corner of the park, 300 yards away from the ocean in order to utilize westerly winds as a power source. A cottage was constructed near the structure to house the windmill’s caretaker. This person was responsible for the windmill’s maintenance and for making sure that the animals who often resided in the park were fed.

The Dutch Windmill was so useful that in 1905 the Mayor of San Francisco, Eugene Schmitz, pushed for another windmill to be erected in Golden Gate Park. The construction of the second windmill was made possible by a $20,000 donation from the vice president of Hibernia Bank, Samuel Murphy. Thus, the Murphy Windmill (or South Windmill) was built and in operation that same year. Murphy Windmill was known as the largest of it’s kind in the world.

In 1913 both windmills were installed with motorized pumps and no longer required wind to function. However, as their usefulness declined so did their upkeep. Overtime, operation of the windmills halted and they became part of the Park’s landscape. After decades passed, a campaign to restore the Dutch Windmill (or North Windmill) commenced and was spearheaded by Eleanor Rossi Crabtree in 1964. Crabtree’s mission was realized in 1980 and the windmill received renovations that were long overdue. That same year the Queen Wilhelmina Tulip Garden was created surrounding the Dutch Windmill.

Similar plans began in 1993 for the Murphy Windmill. The San Francisco Recreation and Park Department and San Francisco Beautiful teamed up to evaluate what their course of action to repair the windmill would be. It was decided that renovations would need to be made as soon as funds were available. They were able to convince the city of San Francisco to donate $500,000 towards the windmill’s restoration.

Today, both windmills have seen continued decay after their initial restorations. Plans for more renovations are in place and involve rebuilding a windmill tower, pump mechanisms, sails, and more. Never the less, the Dutch Windmill, along with its counterpart, continue to showcase over a century of history and are beautiful additions to the historic Golden Gate Park in San Francisco.