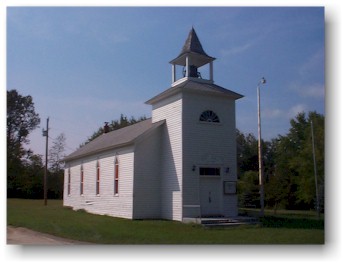 The church was first built in 1871 as the Guard of American Revolution Hall. In 1885 it became a meeting hall for the Grand Army of the Republic Post 77. Then in 1898 it was moved to its current location and converted to a non-denomination church, open to all faiths even the Ku Klux Klan which met to oppose the construction of a Catholic church in nearby Beal City. The building became solely a church in 1904 (it is not clear which denomination). By the 1950s the building was abandoned and in poor condition. Beal City residents saved the church from demolition and organized efforts to restore it which they completed in 1976.

It is not clear whether the church is open to visitors.