The Shalam Colony was located near this marker and existed from 1884 to 1900. The colony was populated by individuals who called themselves Faithists and followed the Oahspe, a sacred book to members of the colony that was written by John Ballou Newbrough. The inhabitants believed in living together, holding all property in common, and adopting America's orphaned and abandoned children.

Historic photo of the Shalam colony. 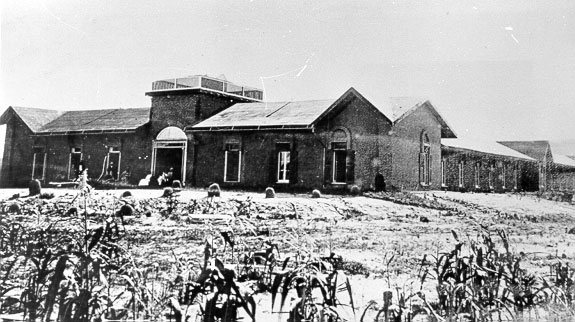 In 1882, a 54-year-old American dentist named John Ballou Newbrough published a book called the Oahspe, claiming that he had been "under the spirit," when his fingers typed out the words of the book. This book would be the bible of a new spiritualist movement that called its adherents Faithists.

After a few initial East Coast locations, in October 1884, Newbrough brought many of his new believers and orphaned urban children (adopting urban children was a central practice within the Faithist religion) to Mesilla, New Mexico to create the "Land of Shalam" colony. The colony was built on 900 acres of sandy land a mile from the nearest irrigation canal.

The colonist installed two water pumps, planted grape vines, and began building their places of residence. Unfortunately, within the year, the pumps broke, and the crops failed. Many of the original colonists became disenchanted and left the commune. Meanwhile, some of those same disgruntled colonists sued Newbrough for fraud.

In light of the crop failures and pending lawsuits, Newbrough left the colony with his wife and daughter for New Orleans, LA in 1887, where he began finding and gathering more orphans. Meanwhile, the colony was run and tended to by millionaire Andrew Howland. Newbrough returned in 1891, along with 10 racially diverse children, whom he and his wife had taken in.

Newbrough died of influenza the same year that he returned. Howland married Newbrough's widow and continued working relentlessly toward Newbrough's mission, spending hundreds of thousands of dollars to create a massive irrigation system. The more he worked, the more success the colony began to experience in the eyes of outsiders, who would visit just to view the impressive irrigation system, which used windmills to feed 50,000 gallons of water to the houses and gardens.

Howland continued also to bring more orphaned children to Shalam, and he additionally founded the first dairy herd in the area. However, he could not attract more long-term Faithists the community. After several failed attempts and having expended all his wealth in the effort, in 1900, the sixty-four-year-old mean was forced to give up the children in the children's home and begin selling the land. Today the site is owned by Fletcher Farms.