Built sometime in the first third of the 18th century, the Kimberly Mansion is an historic house in Glastonbury, Connecticut. It has served as a home for about 300 years and its most famous residents were sisters Abby and Julia Smith, both of whom were fierce political activists involved in causes including abolitionism but especially women's suffrage. It was listed to the National Register of Historic Places and designated as a National Historic Landmark in 1974. 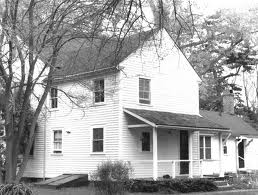 The house was constructed by Eleazer Kimberly who was an early secretary to the Connecticut Colony. In 1790, Zephaniah Smith, a Yale graduate and scholar, bought the home. The Smith family resided there until 1950. Zephaniah and his wife Hannah had five daughters, the two most vocal in terms of political activism being Abby and Julia. The entire family was known for its activism but it was not until the 1870s that the Abby and Julia became well-known. The house was a valuable property and, as women owners of the home, they experience tax discrimination and refused to pay taxes. The town seized their cows and the sisters fought the seizure in court and won the case, which attracted attention from all over the country and internationally.

It is a private home and not open to the public.