Currently occupied by the civic buildings and the main branch of the San Francisco Public Library, this site was the home of the original San Francisco City Hall, which was destroyed by the 1906 earthquake. It is also the site where the Riot of 1877 started, igniting a 2-day pogrom against the city’s Chinese immigrant population. The new library was built between 1993 and 1996 and replaced the previous main library that had been damaged by the 1989 earthquake.

Photo of the former city hall. 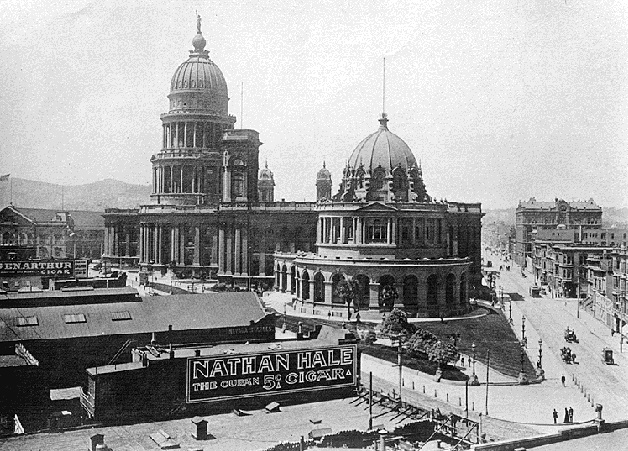 The new main branch of the Public Library opened on April 18, 1996

Artist's rendition of the riot 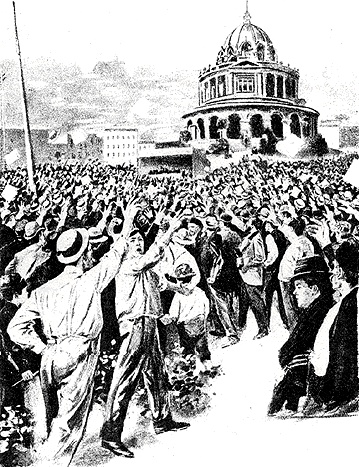 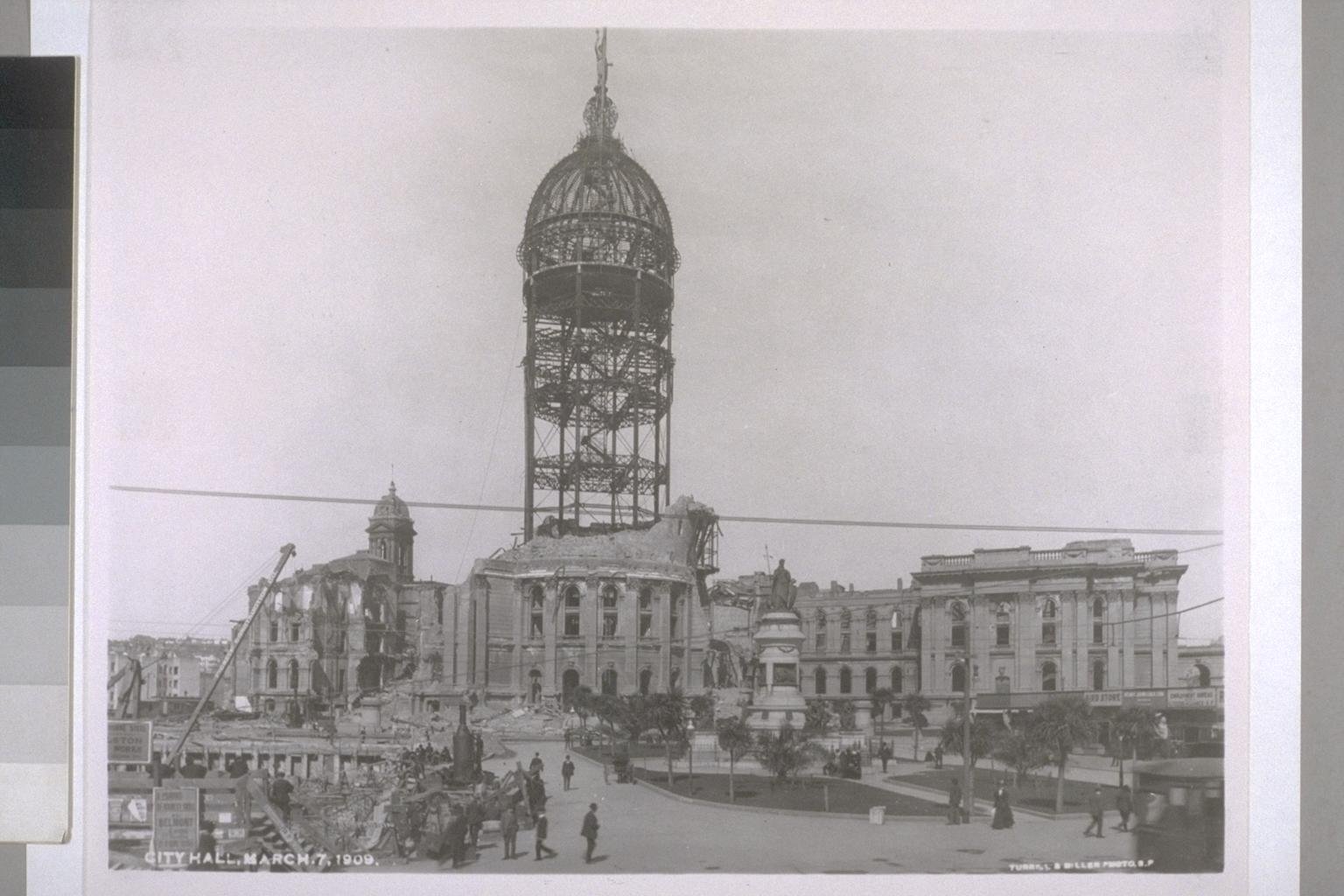 A contemporary illustration shows a mob of discontented laborers rallying on the "sand lot" near City Hall. A gathering such as this was incited to riot in July 1877. 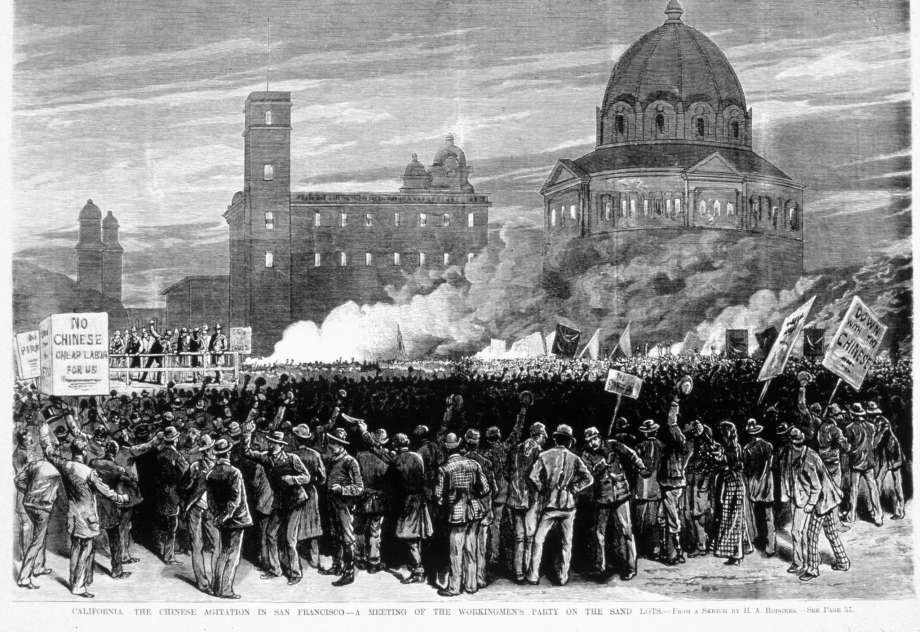 July 24, 1877 headline from the Sacramento Daily Union describing the riot which killed four Chinese immigrants. The San Francisco Chronicle described the riot as "the most wicked and shocking crimes that ever disgraced the city." 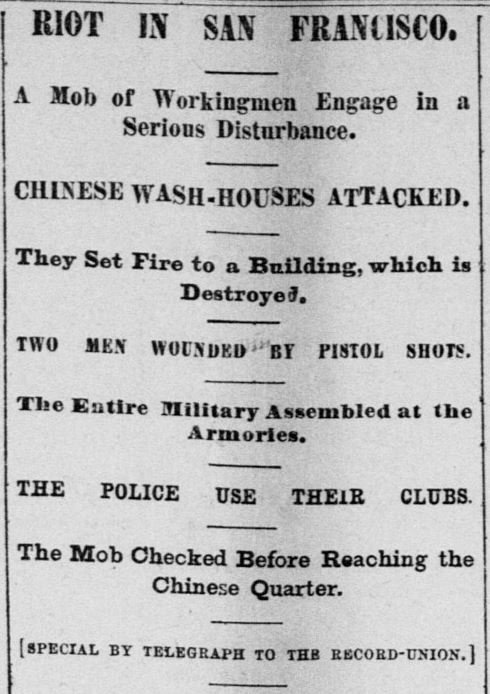 Prior to 1840, the first “city hall” of San Francisco was more of an abstract concept, moving back and forth between the back room of a hotel and a private room in a house, suffering constant displacement due to fires and political corruption. By 1869, those eager to settle and promote the city realized that San Francisco needed a spectacular metropolitan city hall to showcase the city's progress and promise. The site chosen was a triangular plot that had formerly housed a cemetery. The state appropriated the land and auctioned off parcels of the property to various interests in order to raise the $1.5 million necessary to cover the construction costs, with the intent to finish the grand hall in three years.

Construction began in 1870 and wasn’t completed until 27 years later at a total cost of $6 million. The project suffered from tremendous ineptitude and corruption from the outset. A succession of seven chief architects saw a building which was architecturally unsound, had major sewage problems, chimneys that wouldn’t draw smoke, and uneven floor surfaces that didn’t match up from section to section.  The colossal mess came tumbling down in the great earthquake of 1906, and what was left burned in the “Ham and Egg” fire that ravaged the city during the quake’s aftermath.

Surrounding the old city hall were empty sandlots. The lots had been sold for development, but renovation plans were abandoned as the city hall project continued to drag out. It was in these sandlots that San Francisco’s tradition of protest demonstrations was born. Constitutional rights notwithstanding, American settlers in the West had a poor understanding of civic space and how to properly demonstrate for a cause. Because these were empty tracts near City Hall, the sandlots became an impromptu public square for the city’s many groups and associations.

The first congregants in the sand lots were the city’s impoverished, unemployed, and dispossessed - people suffering the brunt of “The Long Depression,” America’s first major economic downturn, lasting from 1873 -1880. The failure of the Bank of California only worsened an already terrible situation in the city. Many on the east coast flocked west to the coast’s only metropolis, San Francisco, in search of a better life. The completion of the trans-continental railroad in 1875 threw thousands of jobless Chinese into the San Francisco labor market, and directly into competition with the Eastern transplants seeking better fortunes.

Rampant unemployment and destitution from 1876-1877 strained the resources of the city’s benevolent associations and churches to the breaking point, as they were feeding thousands of people daily. The depression had migrated west, causing San Francisco’s unemployment rate to skyrocket. The city had no central labor authority and there was no government provision for the unemployed, worsening desperation and discontent.

Beginning on July 16, 1877, a strike on the Baltimore and Ohio railroad incited increasingly bloody riots that swept through Pittsburgh, Albany, Chicago, and St. Louis, reaching San Francisco on July 21. With strife running at an all-time high, labor agitator, anti-Chinese organizer, and Workingmen’s Party of California founder Dennis Kearney (himself an immigrant from Ireland) led an anti-Chinese procession among the congregation and incited the crowds into what would become a bloody riot against San Francisco’s Chinese community. Kearney’s primary political gambit was scapegoating the current labor and financial conditions on the presence Chinese immigrants in the city. His words encouraged the rioters to seize upon and kill a Chinese man who was passing by. Emboldened by this murder, the crowd marched on Chinatown.

The Chinatown pogrom began on July 23rd and lasted until late July 24th. It claimed the lives of four Chinese residents and cost over $100,000 in property damage to Chinatown. Twenty laundries were destroyed by the rioters, who smashed the windows of the Chinese Methodist Mission by pelting it with rocks. The mob also attacked the wharves of the Pacific Mail Steamship Company, because this shipping line was the primary mode of transportation for America-bound Chinese immigrants headed to California. Although the steamships were not burned, the wharves were partially wrecked. Rioters also burned the lumber and hay yards adjacent to the Pacific Mail wharves. The violence was finally halted late in the evening of July 24. It took the combined efforts of the police, the state militia, and more than 1,000 members of the citizen’s vigilance committee-each armed with a hickory pickaxe handle-to subdue the rioting