Standing a total of 210 feet, the unique Art Deco design of Coit Tower stands visually apart from the landmarks of San Francisco, and is one of the city’s best known. Though long rumored to have been designed like the nozzle of a fire hose--since money for its construction had been donated by wealthy heiress and volunteer firefighter Mrs. Lillie Hitchcock Coit--the resemblance was not a consideration of architect Arthur Brown, Jr., who also designed San Francisco’s monumental City Hall and its War Memorial Opera House. Coit Tower officially opened on October 12, 1934, after several of its 25 famous frescos caused a three month delay due to rumors that some contained communist propaganda. Today the Tower remains one the Bay Area’s most popular destinations due to its unique architecture, 360-degree view of San Francisco, and the frescos themselves, many of which were heavily influenced by the work of Diego Rivera. The tower is San Francisco Designated Landmark #165.

Present-day Coit Tower. A statue of Christopher Columbus in front of the structure was installed in 1957. 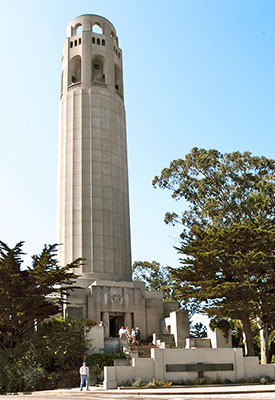 An evening view of the tower, illuminated by modern lighting fixtures. Small infrastructure changes and seismic upgrades have occurred through the decades, but little has changed about the structure itself since 1933. 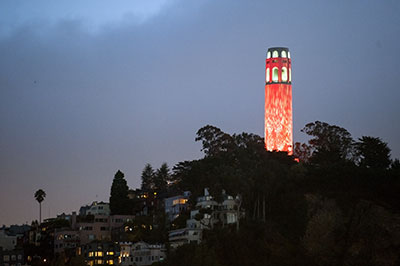 Mrs. Lillie Hitchcock Coit, namesake of the Tower. Her fascination with firefighters may have stemmed from losing two friends to a blaze as a young girl. She is often called the "matron saint" of San Francisco firefighters for her tireless support. 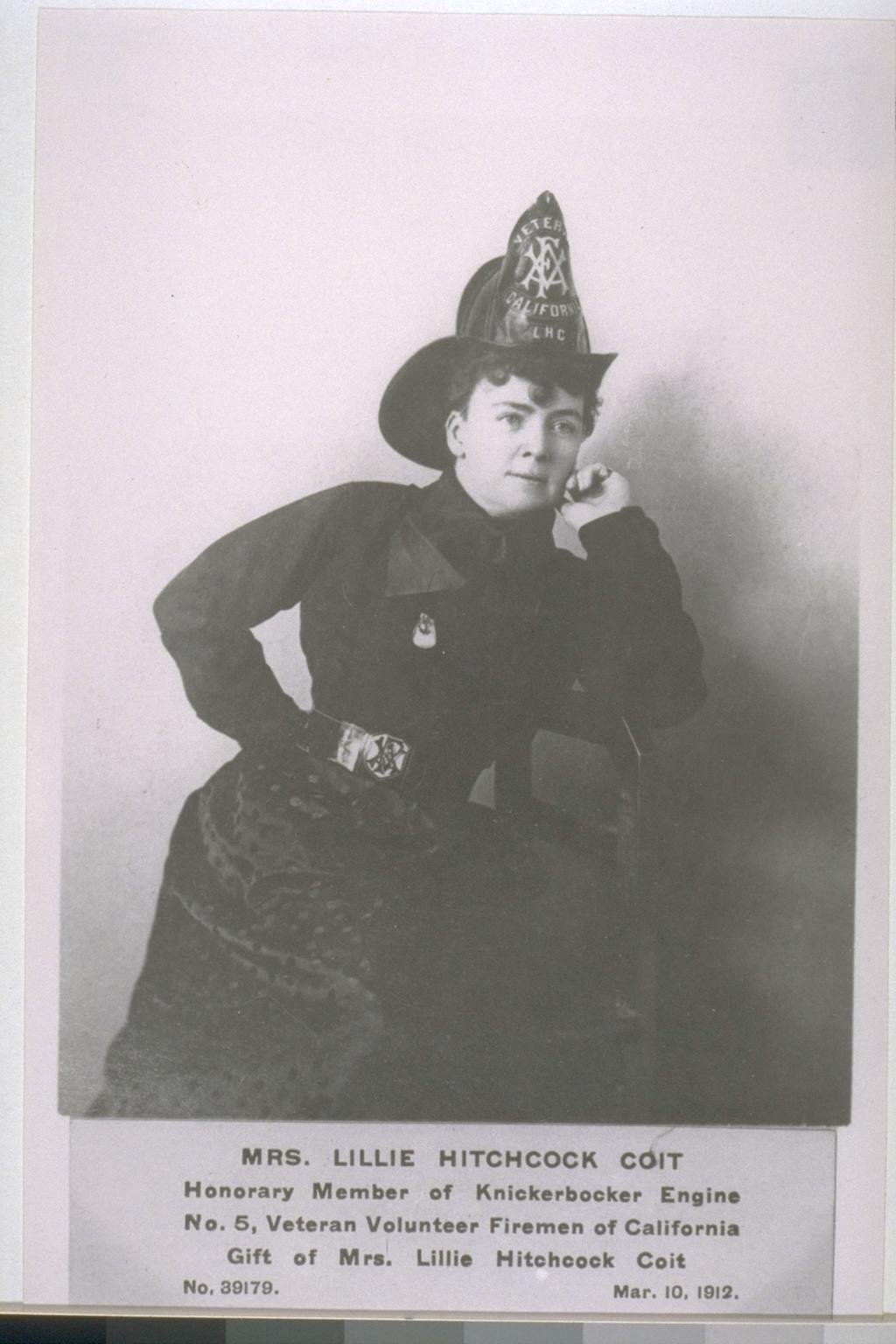 Architect Arthur Brown, Jr. in 1915. His design for Coit Tower was not always well-received, despite his previous success with San Francisco City Hall and the War Memorial Opera House. 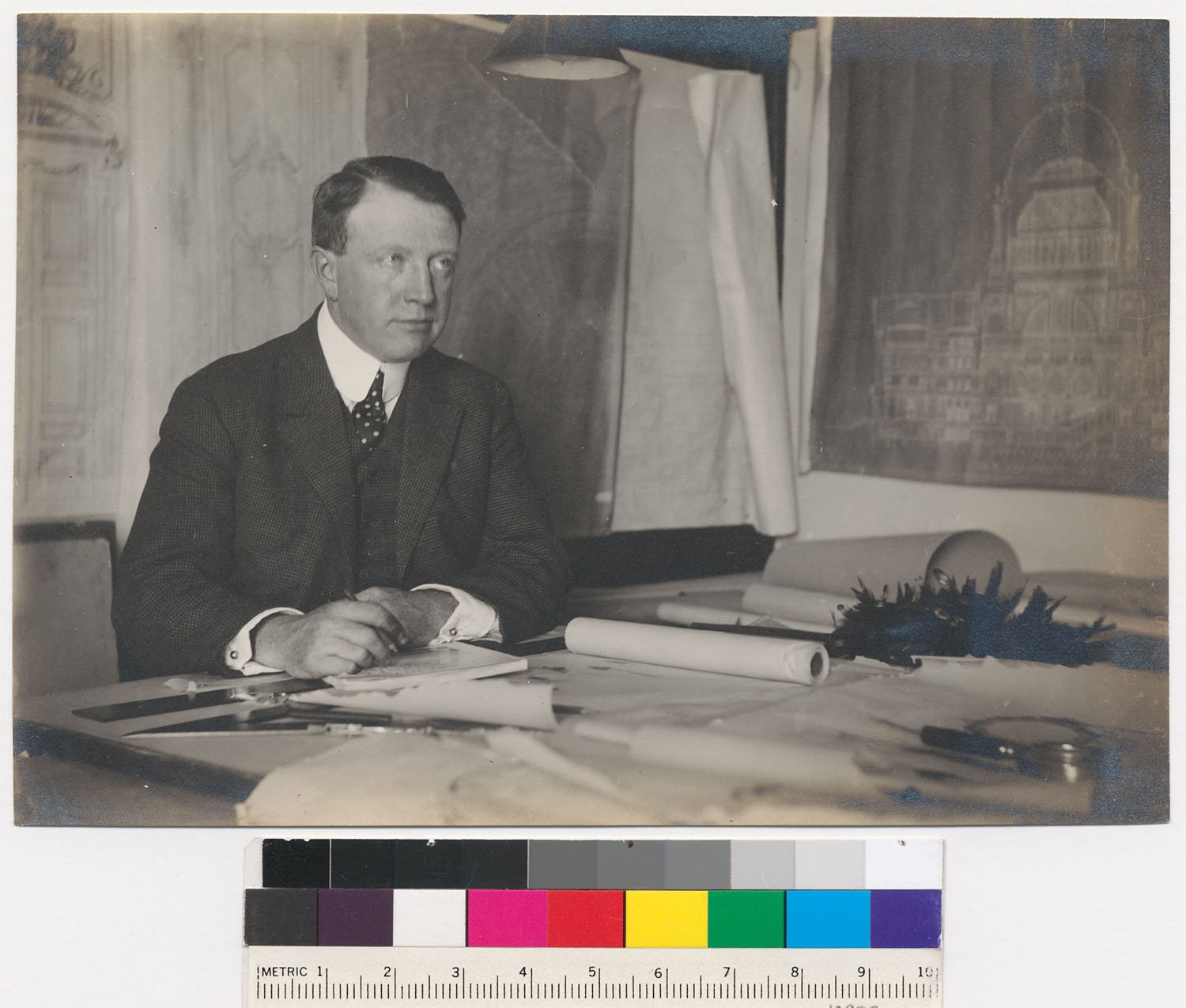 A 1933 panel from "Architect & Engineer" magazine shows how much material was used during construction. The 350,000 feet of lumber was used for scaffolding alone as construction progressed higher and higher. 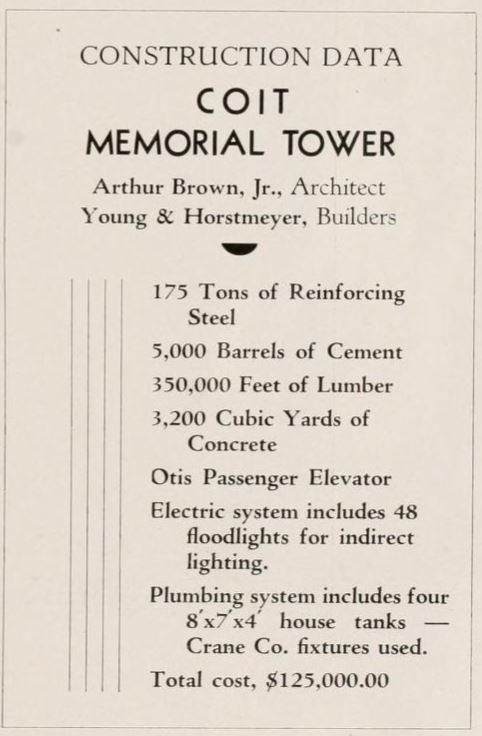 An 1890s sketch of Telegraph Hill as part of a newspaper article detailing damage from the stone quarry. 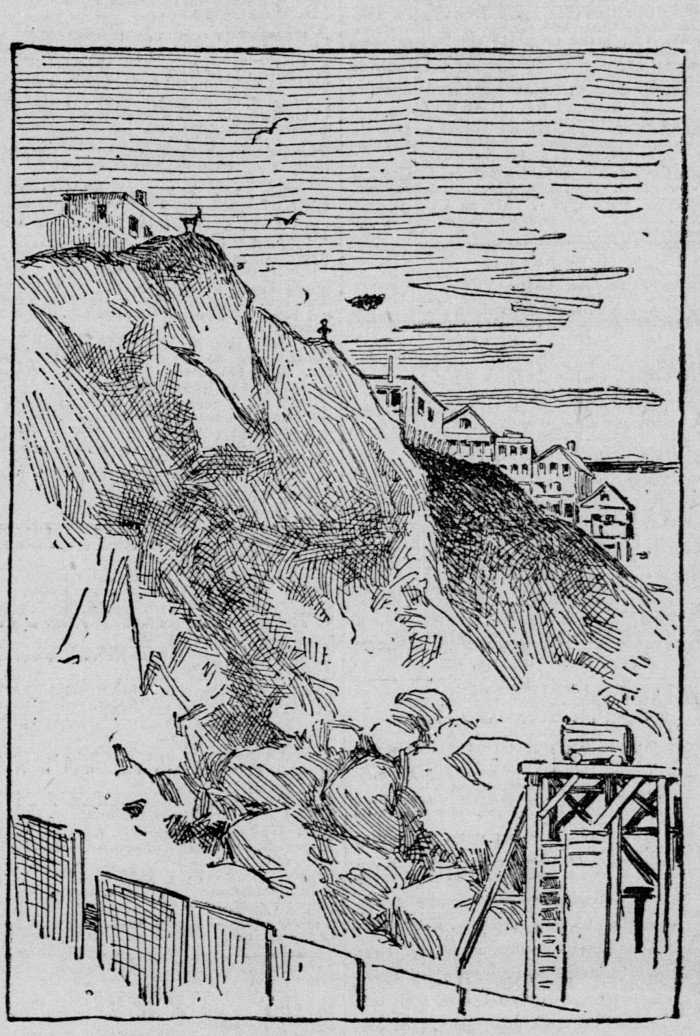 Several November 1933 articles like this (San Bernardino Sun, Nov. 18) detailed the story of a girl who fired at the tower with a pistol--such was the extremity of response at times inspired by Brown's design.

A segment of Bernard Zakheim's mural depicts a man (modeled after fellow artist John Langley Howard) plucking a book by Karl Marx from a shelf--one of several communist references that caused controversy. 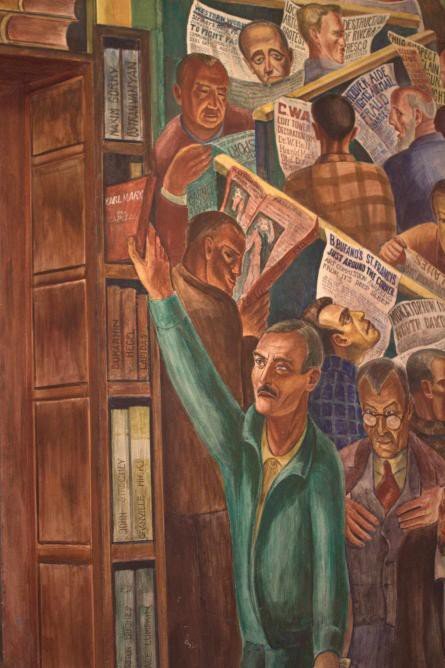 The newly-formed Artists and Writers Union picketed the Tower in 1934 to protest the removal of communist references within some of the murals, claiming that the act was censorship of free speech.

A 1933 photograph of then brand-new Coit Tower. 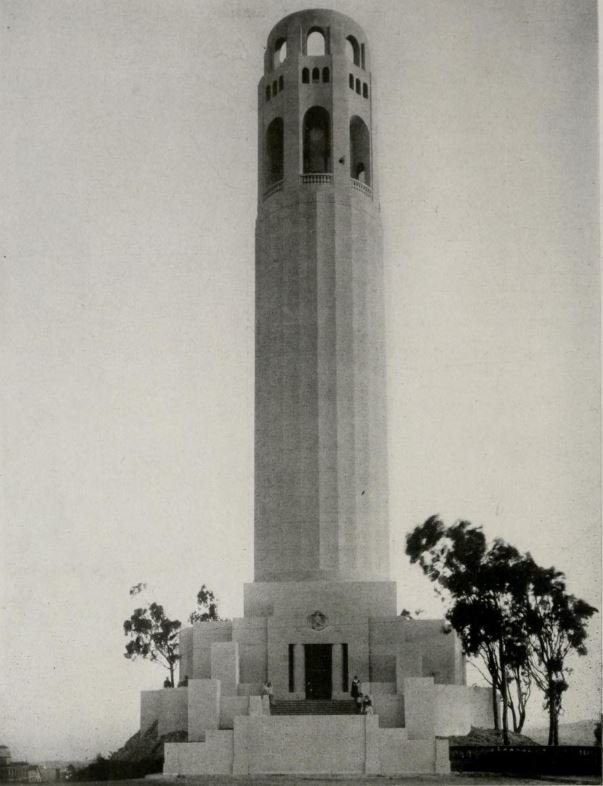 A 1983 article in the Palm Springs Desert Sun newspaper highlighting some of the myths that abound regarding Coit Tower. 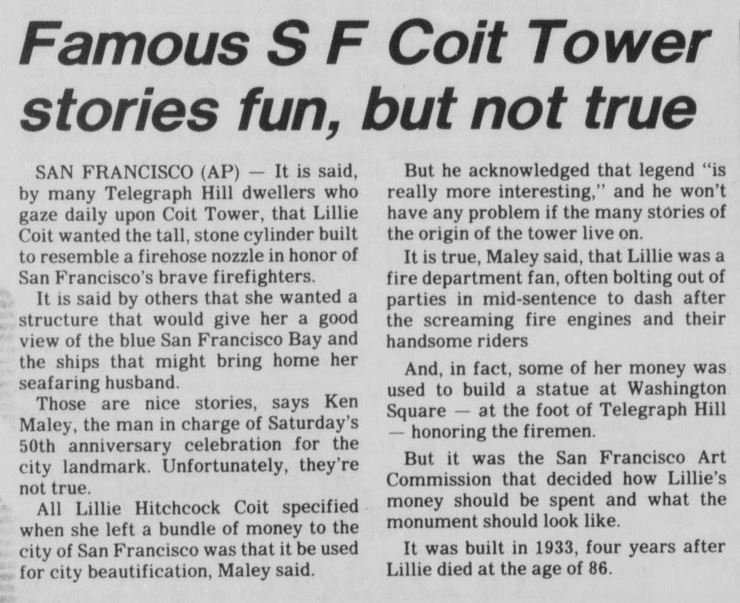 The importance of Coit Tower’s location predates the structure by over a hundred years, when Spanish missionaries and soldiers quarried stone there for Mission San Francisco de Asis and its accompanying Presidio in the 1770s. The substantial heights gained their present name, Telegraph Hill, as California neared statehood in 1849, when a wooden tower with a semaphore was placed atop to hoist signal flags, notifying the harbor and citizens of approaching ships. The semaphore was replaced with an electric telegraph in 1853. When this too was removed, the much-beloved property was purchased by citizens in 1876 and became Pioneer Park. Unfortunately, plans to develop the park for recreation fell flat, and by the mid-1890s locals were in arms against quarrying that was once again carving away sections of hillside.

Pioneer Park continued to lack a significant monument until the 1930s, when events converged to create one of San Francisco’s most iconic structures. First, in 1929, the city received a third of the fortune of Lillie Hitchcock Coit, who as a young woman in 1858 witnessed San Francisco volunteer firemen struggling to pull their engine up Telegraph Hill to the scene of a blaze, and promptly ran to their aid while exhorting bystanders on the street to assist. Coit became the “mascot” of Knickerbocker Engine Company No. 5, complete with honorary uniform and gold, diamond-studded badge blazoned with “No. 5.” It was the larger-than-life figure of Lillie Coit and her legendary support of San Francisco’s fire department that led to the mendacious rumor that Coit Tower, dedicated three years after the heiress’s death, was meant to resemble the nozzle of a fire hose. The press of the day readily snapped up the myth, leading to its perpetuation even today.

Coit’s will required that her funds “be expended in an appropriate manner for the purpose of adding to the beauty of the city which I have always loved.” A “Coit Advisory Committee” was duly formed and soon the influential Herbert Fleishhacker, member of the San Francisco Board of Supervisors and President of the Board of Park Commissioners, dictated that the majority of Coit’s bequest be utilized “for the construction of a memorial for the beautification of Telegraph Hill.”

A design contest was held and the design of Arthur Brown, Jr., a graduate of the prestigious Beaux-Arts architectural school of Paris--not to mention the architect of San Francisco’s City Hall and War Memorial Opera House--was selected. Coit Tower’s finished structure closely resembles Brown’s vision, though many small flourishes belong to the project architect, Henry T. Howard, who managed the day-to-day execution of the design as it took shape.

"Telegraph Hill has always been used as a vantage point, either for signaling or for gaining a panoramic view. Why not emphasize this idea in the form of the memorial?" -Henry Howard, project architect

The tower that rose atop Telegraph Hill from 1931 to 1933 contains a variety of Art Deco hallmarks, including the fluted tower, its arches, and the use of textured reinforced concrete. Before it was even complete, however, the design drew criticism and controversy, including that of local artists who appealed to the Arts Commission to halt construction on the grounds that the structure was too tall, and that it was a mockery of a fire hose. Henry Howard defended the design in a 1933 article for Architect and Engineer,

“The tower has no prototype. It is not a medieval keep to resist capture, nor a lighthouse to warn off mariners. Neither is it a clock tower nor a fanciful ebullition for a exposition. It is intended to be dignified with austerity; monumental without utilitarian function.”

Tensions over the Tower’s aesthetic values paled in comparison to the controversy over its frescos in 1934, however. Twenty-five muralists has been selected to adorn the Tower’s interiors as part of a new Federal program, the Public Works Art Program or PWAP. A newly-minted agency of President Franklin Roosevelt’s New Deal to combat joblessness and national economic hardship in the depths of the Great Depression, PWAP hired more than 2,500 artists and writers across the country to create original works of art for public places such as post offices, government buildings, and parks. Dr. Walter Heil, director of San Francisco’s de Young Museum and the regional chairman of PWAP for Northern California and Nevada, personally selected the muralists and proposed fresco as the medium in which they would work. He envisioned these murals as the “piece de resistance” that would crown Coit Tower as a civic masterpiece.

The artists began working after the structure was completed in late 1933, and in early 1934 trouble arose as a massive longshoremen’s labor strike concurrently crippled the port of San Francisco. The city’s politicians dismissed this unrest as the work of communist agitators and the newspapers began to stoke fears of a “Red menace” plotting revolution. Meanwhile at Coit Tower, a number of the artists were incorporating communist motifs into their murals; they were acolytes of Diego Rivera, the famed Mexican muralist, who only the year before had painted a large portrait of Soviet leader Vladimir Lenin as part of a mural in New York. The mural was ordered destroyed by Nelson Rockefeller, and now Rivera’s assistant, John Langley Howard was working in Coit Tower, along with three artists with similar political views. Herbert Fleishhacker caught wind of the potential scandal and asked Dr. Heil to investigate. Upon confirmation of his suspicions, Fleishhacker ordered the Tower sealed off from any public access, its windows whitewashed to prevent anyone glimpsing the murals, and canceled the Tower’s scheduled July 7 opening.

Newspapers sniffed a story, and on July 3 the San Francisco Chronicle ran a story headlined, “Is This Red Propaganda? Murals on Coit Shaft Hint Plot for Red Cause.” Though these communist symbols were only incorporated in minor ways, it was enough to cause an outcry for the murals’ removal. Finally, after a whirlwind of picketing and Red-baiting in the press, only two symbols were removed from Howard’s work--the other artists’ sections remained untouched, and Coit Tower opened to the public on October 12, 1934.

Since then, the tower has received seismic upgrades and restorations, but its appearance remains largely unaltered. The delicacy of the frescos has required several careful restorations, the first of which occurred in 1960 under Dorothy Puccinelli Cravath, who brought in the original artists to assist and consult whenever possible. Locked glass doors were installed to prevent tourist access to the second floor murals, which had been affected by vandalism and cigarette smoke. A second restoration was led in 1975 by Emmy Lou Packard, former assistant to Diego Rivera. Anne Rosenthal led a third effort from 1987 to 1989, which saw the replacement of the glass doors with low-profile Art Deco iron crowd barriers designed to match the building. In 2018, Anne Rosenthal returned to spearhead a new wave of restoration, requiring three months, and a policy of twice-yearly maintenance has at last been instituted to protect the rare art.

Coit Tower is still one of San Francisco’s most popular public landmarks and tourist destinations (it was named a San Francisco Designated Landmark in 1984, and joined the National Register of Historic Places in 1989). The plaque on the tower reads:

"Coit Tower. This 210 foot monument was built in 1933 with monies bequeathed by Lillie Hitchcock Coit to beautify The City she loved. Frescoes were painted in the interior of the newly built structure by ocal artists funded through the United States Government's Public Works of Art Project. This plaque is placed by the Recreation and Park Commission October 8, 1983 to mark Coit Tower's 50th Anniversary and its designation as an historic landmark."

10am to 6pm Special hours and days for elevator rides to top observation floor.