Howard Thurman was an author, minister, academic, and civil rights advocate. Thurman was a Baptist minister, Morehouse College valedictorian, and the first black dean of Boston University. Thurman was an inspiration for Martin Luther King Jr., as one of the first advocates for non-violence in the modern civil rights movement. Thurman was, himself, inspired by Mahatma Gandhi, whom he met during his life. Thurman's words and thoughts, most of which he published in Jesus and the Disinherited, were remarkably influential in the fight for equal rights.

A photograph of Howard Thurman 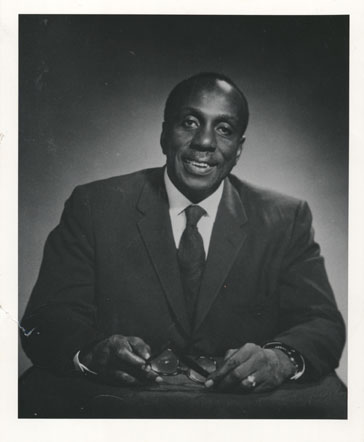 Howard Thurman was born in November of 1900, in Daytona, FL. He was the son of Saul Solomon who worked on the railroad ways of Florida and Alice Thurman. Then Daytona was a very small vacation town, busy in during the winter months when wealthy white northerners came south to escape the cold. Because of this frequent tourism racial tension in Daytona were not as intense as other southern cities. Despite this, the city was indeed strictly segregated and African-Americans there enjoyed far less opportunities than their white counterparts.

The Daytona Board of Education provided no school for black children above middle school age, cutting of primary education at the seventh grade. This was just a year short of the required time in school as to be admitted into high school. And so much of the black population would never reach high school, and therefore never attend college. Despite this fact Thurman demonstrated such academic potential that his elementary school principal volunteered to privately tutor him through the eighth grade. After the end of their teaching the principal petitioned to allow Thurman to take the eighth-grade examination for admittance into high school. The superintendent agree to let Thurman take the test only if he could personal proctor the exam. Thurman passed and was subsequently admitted to the Negro Public School.

Thurman’s struggled to attend high school though, as the state housed only three black public high schools, and none were considerably close to Daytona. It did not help that the Thurman  family was quite poor. Eventually, though, Thurman was able to enroll at a high school in Jacksonville. Thurman lived with a cousin during this time. He did chores in exchange for room and board. Yet after the first year his cousin could no longer support him. Thurman's lack of money at this point was intense. He rarely ate and his health had suffered severely from the lack of nutrition. Despite all this hardship Thurman graduated in 1919  as the valedictorian. His achievements in high school garnered him a scholarship to Morehouse College of Atlanta.

Upon entering Morehouse College, Thurman thought he'd become a minister; yet, he majored in economics. He enjoyed studying religion and philosophy. As he continued into college he realized his disinterest in being a preacher, and after a summer at Columbia discover a singular love for philosophy. In his senior year he did decide to attend the seminary despite having no clear intention to become a pastor.

Thurman graduated in 1923 and was admitted to Colgate-Rochester Theological Seminary in Rochester, New York. Thurman served as class president there though he was one of very few black students. Upon graduating he made his final decision to serve the church and was ordained in 1926.  He accepted a position as pastor of a black Baptist church in Oberlin, Ohio. The same year he married his first wife Kate Kelly, a social worker. His soon established an amazing reputation as a preacher spread rapidly. This perception drew both blacks and whites from the area to the church. By the end of the year Mount Zion Baptist Church was integrated. A highly progressive and somewhat unheard of thing in the American South.

In 1932 Thurman accepted a teaching position in the religion department of Howard University. The university housed the best black scholars of the time including Rankin Chapel, Thurman joined Ralph Bunche, Carter G. Woodson, Benjamin Mays. Thurman taught James Farmer, who helped found the Congress of Racial Equality (CORE). It was in Farmer's thesis paper that Thurman was introduced to the ideology of Mahatma Gandhi. Thurman grew to admire the man and his ideas, which would be employed during the modern civil rights movement during the mid 20th century. Thurman admired Gandhi so much so that he and his family took a pilgrimage to India in 1835.

During the next few years Thurman wrote and spoke extensively about the battle for equal rights for African Americans and the importance of employing non-violent methods. He wrote at least 10 books and articles. Thurman died in April of 1981 in San Francisco where he had been teaching. Many of the most well known civil rights activists, most notably, Martin Luther King Jr. looked to the words of Thurman for inspiration and insight on equality and how to obtain it.