The Florence City Cemetery is unique with its historical presence felt throughout the State of Alabama. There are over 12,000 markers, monuments, and headstones in the cemetery. It is an important place of geneaological research for those from all over the United States. With some of the most unique gravestones in the country, ranging from sheep statues to steps that lead to nowhere, this is a site for anyone who loves the macabre. 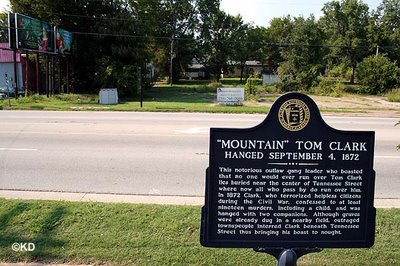 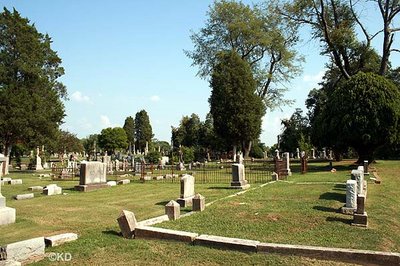 Recently placed on the Alabama Historic Cemetery Register. There are many veterans of previous wars here, including many Civil War veterans, some from the War of 1812 and perhaps even one from the Revolutionary War. The cemetery was established along with the town in 1818, but the oldest known burial is from 1831.

The most interesting story from the cemetery is noted on a historical marker along East Tennessee St. It talks of"Mountain" Tom Clark, who was hanged September 4, 1872. The text from the marker reads:

This notorious outlaw gang leader who boasted that no one would ever run over Tom Clark lies buried near the center of Tennessee Street where now all who pass by do run over him. In 1872 Clark, who terrorized helpless citizens during the Civil War, confessed to at least nineteen murders, including a child, and was hanged with two companions. Although graves were already dug in a nearby field, outraged townspeople interred Clark beneath Tennessee Street this bringing his boast to nought. "