Located in Golden Gate Park, the de Young is an art museum dates back to the 19th century and features over 1,000 paintings, 800 sculptures, and 3,000 other works of art. The museum is named after its founder, early San Francisco newspaperman M. H. de Young. The current director of the museum is Max Hollein, who took over from Colin Bailey on March 22, 2016. 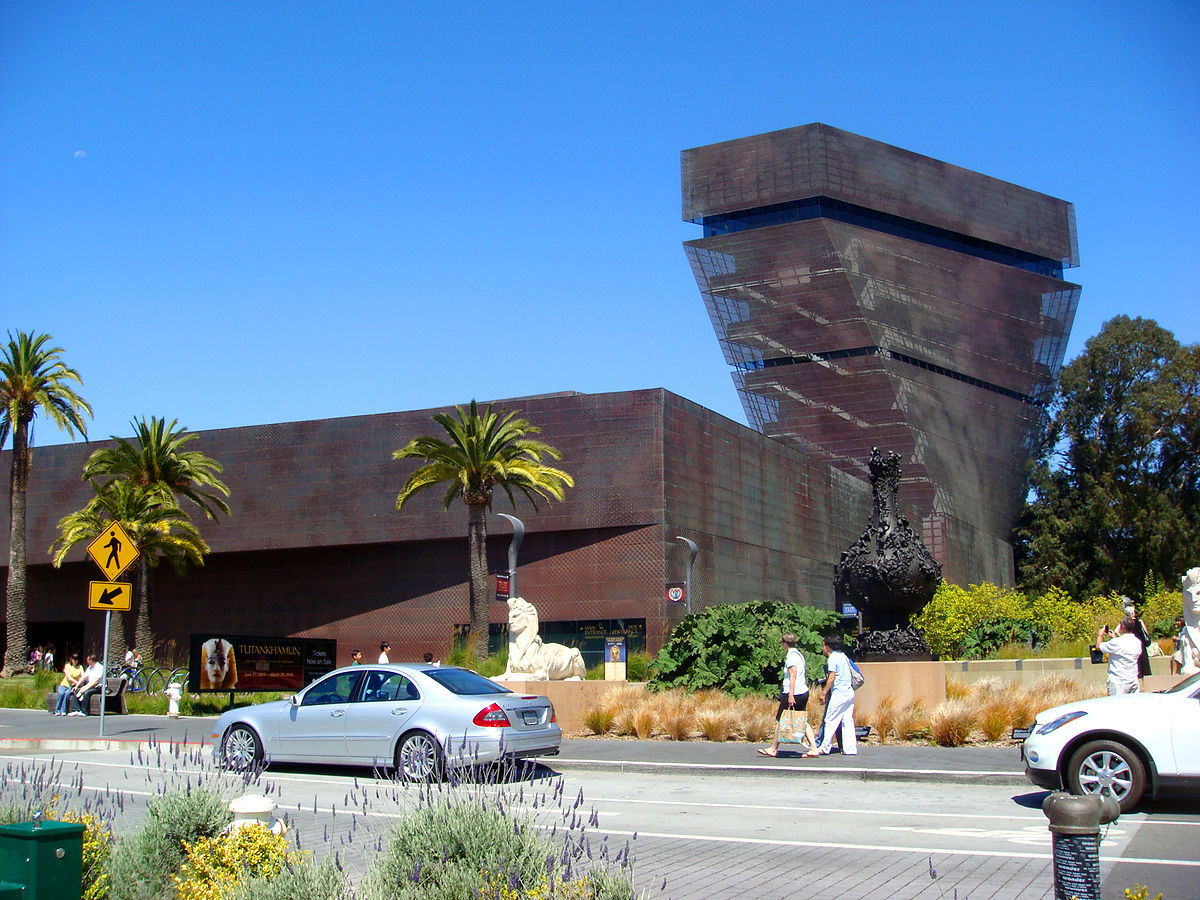 Originally built in 1894 for the California Midwinter International Exposition, the temporary structure, named after the exposition chair and co-founder of the San Francisco Chronicle Michael H. de Young, became a permanent local art museum, which opened March 24, 1895, and was immensely successful. Designed in a pseudo-Egyptian Revival style, the building featured images of the cow goddess, Hathor. The free-admission-museum featured American art, international textile arts and costumes, and art of the ancient Americas, Oceania and Africa. Unfortunately, the museum building suffered damaged during the 1906 earthquake and had to close for a year and a half while it was repaired.

As the museum’s success continued to grow, Michael de Young headed up plans to construct a new building as an expansion of the museum. The coordinator for architecture for the 1915 Panama-Pacific Exposition, Louis Christian Mulgardt, designed the new structure in the Spanish-Plateresque style. According to the museum’s official website, “In 1921, de Young added a central section, together with the tower that would become the museum's signature feature, and the museum began to assume the basic configuration that it retained until 2001. Michael de Young's great efforts were honored with the changing of the museum's name to the M. H. de Young Memorial Museum. Yet another addition, a west wing, was completed in 1925, the year de Young died. Just four years later, the original Egyptian-style building was declared unsafe and demolished. By the end of the 1940s, the elaborate cast concrete ornamentation of the original de Young was determined to be a hazard and removed because the salt air from the Pacific had rusted the supporting steel.”

Again, in 1989, the museum building suffered damage as a result of an earthquake; this time it was the Loma Prieta earthquake. Eventually, the board of trustees came to the decision that the reconstruction of the fine arts museum would be privately financed “as a philanthropic gift to the city, in the tradition of M. H. de Young.” According to the museum website the board chose the Swiss architectural firm Herzog & de Meuron to conduct the design project, and they worked the museum “into the natural environment of the park. [The design] also provides open and light-filled spaces that facilitate and enhance the art-viewing experience. Historic elements from the former de Young, such as the sphinxes, the original palm trees, and the Pool of Enchantment, have been retained or reconstructed at the new museum.”

Today, the de Young Museum is one of the most popular art museums in the nation.