This is a contributing entry for Treetops and Tombstones: Charlotte's Super Natural Arboretum and only appears as part of that tour.Learn More.

Welcome to the Treetops & Tombstones: Charlotte's Supernatural Arboretum City Walk Tour! This leisurely tour through the Historic Elmwood Cemetery will be no longer than 1 mile and is accessible for cyclists and pedestrians. Elmwood Cemetery is one of Uptown Charlotte’s most unique and historic locations. Did you know it’s also a certified arboretum? City of Charlotte Arborists will give tips on how to identify some of the special trees in the cemetery. The Cemetery Manager will discuss the cemetery, its monuments, and some of the historical figures who are buried here. 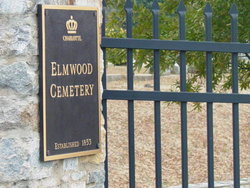 For over 160 years Elmwood cemetery has been serving Charlotte citizens. The first recorded burials date back to 1855. Many of Charlotte’s prominent citizens are buried in Elmwood. The cemetery has grown from 25 acres to over 70 acres which includes the 9th Street Pinewood African American cemetery. Throughout the years as family members would pass on, families would plant different species of trees in remembrance of their loved one. This is how many of the trees in Elmwood have grown into the beautiful specimens they are today. Elmwood Cemetery is also significant as an integral part of the center city’s urban landscape. Like many urban cemeteries in the nineteenth century, Elmwood served as a place of respite for the living as well as the dead. Elmwood’s strategic location and neatly kept, shady lawns attracted many Charlotteans looking for a place in town to take their family walks and Sunday picnics. As one of the few green spaces remaining in the heart of center city Charlotte, Elmwood still serves as a place for residents and workers seeking relief from the noise and bustle of the city. The cemetery division is part of the landscape division for the city of Charlotte. The city would like to share to the public the different species of tree’s that have been planted throughout the years.

Our first stop, the George Randolph Scott grave, is the most visited gravesite in the cemetery. George Randolph Scott was an American film actor whose career spanned the years from 1928 to 1962. His most enduring image is that of the tall-in-the-saddle Western hero. Out of his more than 100 film appearances over 60 were in Westerns.