Built by Benjamin Franklin Prader in 1855, the mill was fitted with the latest in grain cleaning, grinding and sifting machinery powered by the Coahulla Creek. Following the outbreak of the American Civil War, the mill served as an campsite and valuable source of food for Union soldiers. The mill was operated by the Praters until the 1950s following the Praters came a series of millers until the 1960s. Today, the mill has become well known for the arts and crafts festival held twice each year. 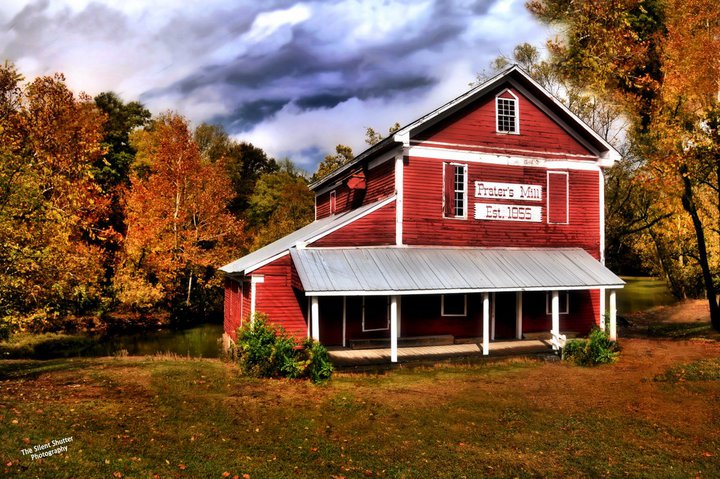 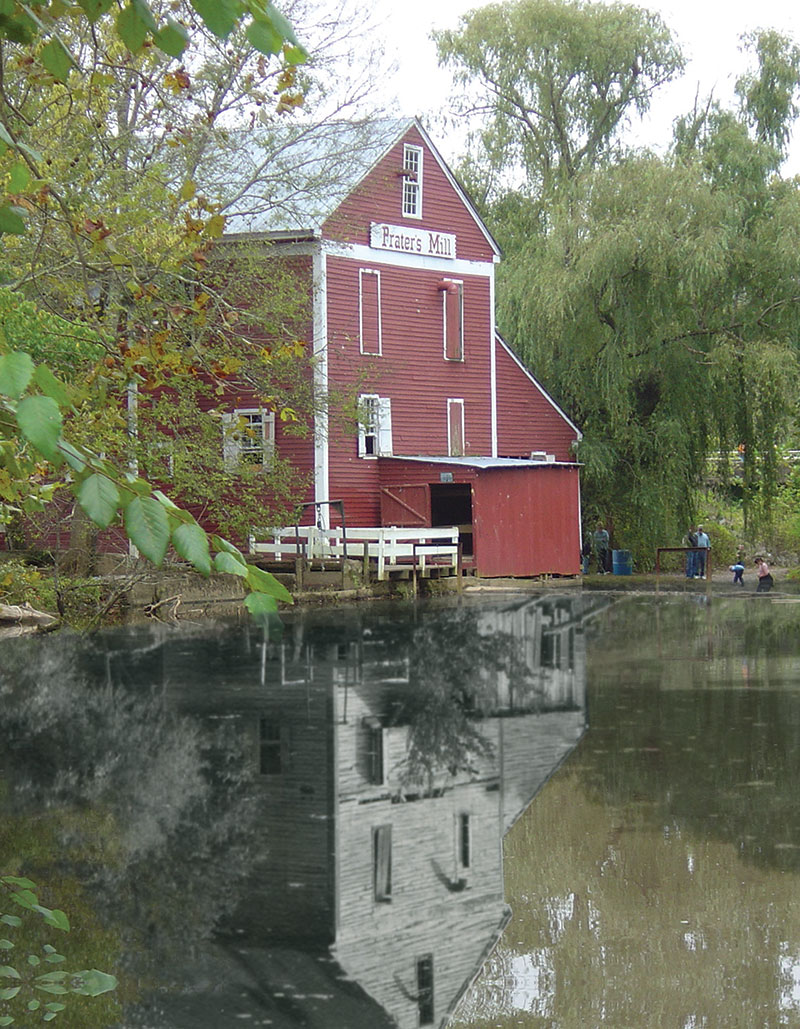 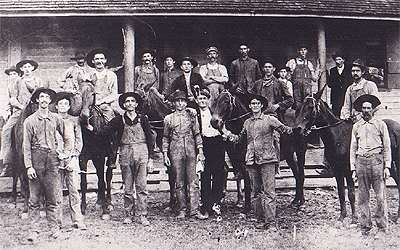 1999: Three millers, Prater's Mill Gang volunteers with mule, on the front porch of the mill, at the turn of the 21st century. 1999 photo by by Amy Holcomb 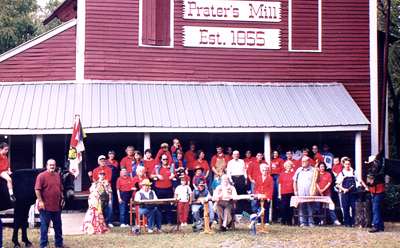 Throughout the United States, there are several historic sites that have played an integral part in the development of its community although it was not created for such a purpose. One of said sites was the Prater’s Mill in Dalton Georgia. During the course of its’ history, the mill has served an important role in not only the development of the community of Dalton but also vital in preserving the legacy of southern Appalachia. This can be said, because since its creation in the mid-19th century, the mill has been present throughout the most well-known periods of American history that included the civil war and the days of the Cherokee Indians.

While it is imperative to know the story of Prater’s Mill it is equally important to understand the importance of the community of Dalton to realize the mill’s lasting impact. Prior to its establishment as a town, the territory was once the territories of the Cherokee nation of Native Americans. It was not until gold was discovered that white Americans began to establish a settlement called cross plains in Cherokee territory. Following the establishment of the Village of Cross Plains, the white Americans demanded more land to expand for more inhabitants and for more resources especially gold. To receive their demands, the whites of Cross Plains inhabitants urged the government to issue a removal of the Cherokee from their own territory. Their pleas were answered by 1838 with the forced removal of Cherokees by Federal forces. Following the forced removal of the natives, work began on the Western Atlantic railroad company to join the Georgia railroad with the Tennessee River which was completed by 1852.

Three years following the construction of the Western Atlantic railroad, the region began to change as a result of its introduction. In other words, the railroad helped transform sleepy Cross Plains into the bustling town of Dalton because following its creation the railroad caused an economic boom with completion of the line to Chattanooga being three years away. During the following two years, the population grew from a few hundred to fifteen hundred. Comprised of  a collection of drovers or farmers, it was not long before Dalton was established as the seat of the new Whitfield County which was created from Murray county that was originally broken out from of Cherokee County in accordance to a treaty signed between the US government and the natives that gave the white settlers ownership to the lands. With the construction of the railroad and the thriving commerce, new industries to continue this thriving enterprise were beginning to appear to help the continuation of this new way of life; which included the creation of Prater’s Mill.

It was built in 1855 by a man named Benjamin Franklin Prater to clean grain with some of the latest in grain cleaning machinery that was powered by the Coahulla Creek,then added up more functions such as a cotton gin, a saw mill, a wool carder (device that combs sheep wool), a syrup mill, a general store and blacksmiths shop. However, although the mill and the city of Dalton would appear to be known for its industry, they would both be a part of a much larger drama that was about to play out during the American Civil War. In wake of the war, Dalton found itself in the midst of the conflict as it served as headquarters of the Army of Tennessee under Commander Braxton Bragg. The shift in command was later changed to Brigadier General Joseph E Johnston in 1864. For five months the town would serve as a base camp in which the Confederate Army would build an impenetrable line of forces at the Rocky Face Ridge to the west of town. Throughout this tumultuous period, the Prater Mill served as a campsite for Confederate soldiers embroiled in the campaigns against the impeding Union forces. During their time spent camping at Prater’s Mill from 1862-1863, the mill’s owner Benjamin Franklin Prater sold corn, hay, bacon, fodder, planks and split rails for up to $1,591.17 Confederate dollars. In addition to his support of the occupying Confederates, Prater himself enlisted into the Georgia State Guards AKA the Red Hill Guards as a third lieutenant.

In February of 1864 the mill was occupied by Union forces under the command of Colonel Eli Long who accounted 12 prisoners 350 mounted infantry men and 250 cavalry residing on the mills grounds. In September of 1864, the Union forces captured the city of Dalton and as a result of the advancing Union forces, the Confederate forces retreated further south past the boundaries of Dalton. For the remainder of the war, Dalton remained in the hands of the Union forces. This would also be the same case scenario for Prater’s Mill. In May of 1864, the Union and Confederate forces engaged in combat in the Battle of the Varnell Station Area. Fought between General Edward M. McCook, the mill served as again a campsite for Wheeler’s Calvary in the month prior to the Battle of Varnell Station. The result of the battle was the ousting of the Union forces from Georgia as well as the capture of fourteen officers including Colonel Oscar H LaGrange and 136 enlisted troops. Following the victory of the Confederates at Varnell’s Station, the vicinity surrounding it experienced growth especially at Prater’s Mill due to the influx of farm growth in its surrounding area which in turn produced such crops such as wheat, cotton and corn that which were both ginned and ground at Prater’s. By the end of the war in May of 1865, Ben Prater was obliged to free the seventeen slaves he owned and out of charity gave each slave’s family several acres of land.

Besides being a site of industry, Prater’s Mill greater function in the years it was active occurred during the course of the Civil War as a campsite for both sides of the conflict Union and Confederate. Based on some Civil War maps, Prater’s Mill is also listed as Barrett’s who was a former owner of this property or Russell’s Mill which was the miller that Prater hired. For Union army, the mill was a valuable resource for food during these battles. The mill was under the Prater’s operation until the 1950’s and succession of millers ran it until the 1960s. In 1971, the Mill was in an extensive restoration and preservation by the volunteer of Prater’s Mill Foundation whose took over the Mill.

However, on May 20, 1995, the fire was intentionally set on the north side of the Prater’s Mill and this caused damage for the interior of the mill. Windows, roof, siding, electrical system, antique display case was totally damaged. Donation was raised by the Prater’s Mill Foundation for repairing and preserving the mill.

After almost 150 years, the Prater’s Mill is listed on the National Register of Historic Places and it is also named as an American cultural legacy by the United States Library of Congress. Besides, the artifacts of Prater’s Mill such as historical photographs, papers, oral histories and musical recording is also placed in the nation’s library and in the University of Georgia Library in Athens

Come and visit the Prater’s Mill Historic Park to enjoy fishing, boating and outdoor activities as well as to enjoy the Mill’s tour and country fair every single year.