This historical marker offers a brief history of the Town of Wayne, which was established in 1842. The area was part of the Savage Land Grant, which awarded plots of land to veterans of the Savage Land Grant. Abraham Trout acquired some of this land and opened a grist mill in 1828. When Wayne County was created in 1842, Trout's property was designated as the county seat. The new town that developed here was known variously as Trout's Hill, Fairview, and Wayne Court House during the nineteenth century, but today is known simply as Wayne.

The Wayne Courthouse as it was during the Civil War. 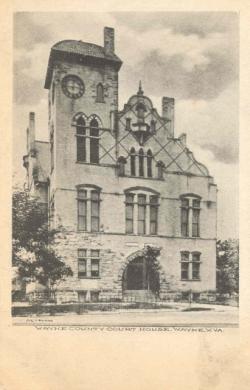 The official historical marker for Wayne. 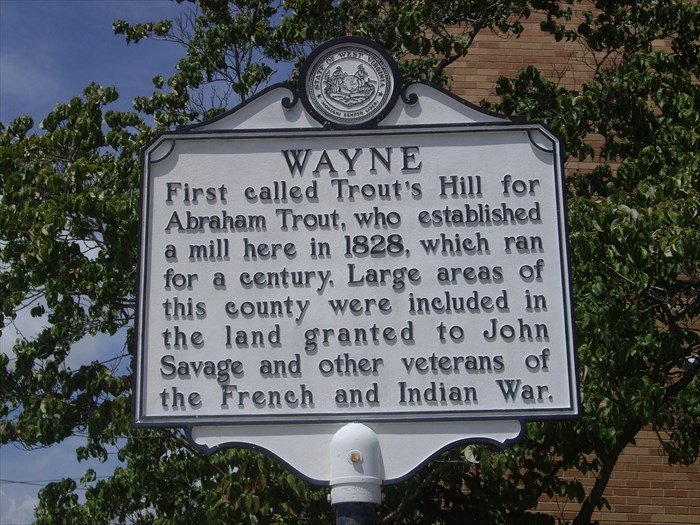 In 1842 an act of the Virginia state legislature separated the western portion of Cabell County to create Wayne County. Named after Revolutionary War General “Mad” Anthony Wayne, the new county was sparsely populated and had no formal towns at the time. The legislature as a result chose the property of Abraham Trout to be the county seat. Trout had lived in Wayne County since at least 1828 when he opened a grist mill. He owned a 500-acre farm in the heart of the county; this central location made it an ideal place for a county courthouse. Soon after the establishment of Wayne County in 1842 construction began on a courthouse and government buildings on Trout’s farm. He also sold sections of his property for the creation of homes and businesses. Within a few years a small town had developed from Trout’s farm.

The new community was originally not given a name. Because the main part of town sat on a hill in Trout’s farm, locals began to refer to it as Trout’s Hill. It was also referred to as Wayne Court House; these two names were used interchangeably for several decades. In 1860 the name Fairview was introduced. The town was officially incorporated as Fairview in 1882 but the name failed to stick. It continued being referred to mainly as Wayne Courthouse. In 1911 the town was renamed simply Wayne, and has remained ever since.

When the Civil War began in 1861 much of the town sided with the Confederacy and secession. A pro-Confederate militia called the Fairview Rifle Guards was organized, and a secession flag was raised in front of the courthouse. After the Fairview Rifles were deployed to the Kanawha Valley, Wayne became vulnerable to incursions by Union soldiers. In August 1861 Union troops from the 5th (West) Virginia Volunteer Infantry occupied the town and took a number of prisoners. For several days the troops were besieged by pro-Confederate locals, and gun battles were fought around the courthouse. After three days Union reinforcements arrived and they managed to leave town with the county court records. For the duration of the war Ceredo served as the de facto county seat for Union supporters in Wayne County. For years afterwards bullets were found lodged in the planks of the Wayne courthouse.

For many years the population of Wayne remained small; it remained under 200 for most of the 1800s. The extension of the Norfolk & Western Railway to Wayne in the 1890s helped to grow the town over the next few decades. New businesses opened, a high school was established, and the population rose. A large fire on December 6, 1905 destroyed the bank and many businesses, but the town recovered. It also successfully fended off several attempts to move the county seat to the larger towns of Ceredo and Kenova in the north. Today Wayne remains a modest-sized community, with a population of about 1,400.