Cannons at Sutter's Fort. The outpost was one of the most heavily defended in California at it's height, though it never belonged to the Mexican Army and was only briefly held by the U.S. Army. 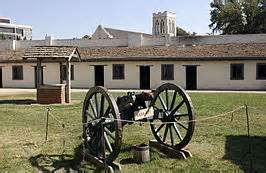 An aerial of the restored fort. Note the two blockhouses (watchtowers) on the corners. These were modeled after the blockhouses of Russia's Fort Ross, in Sonoma County, but built of adobe rather than redwood. 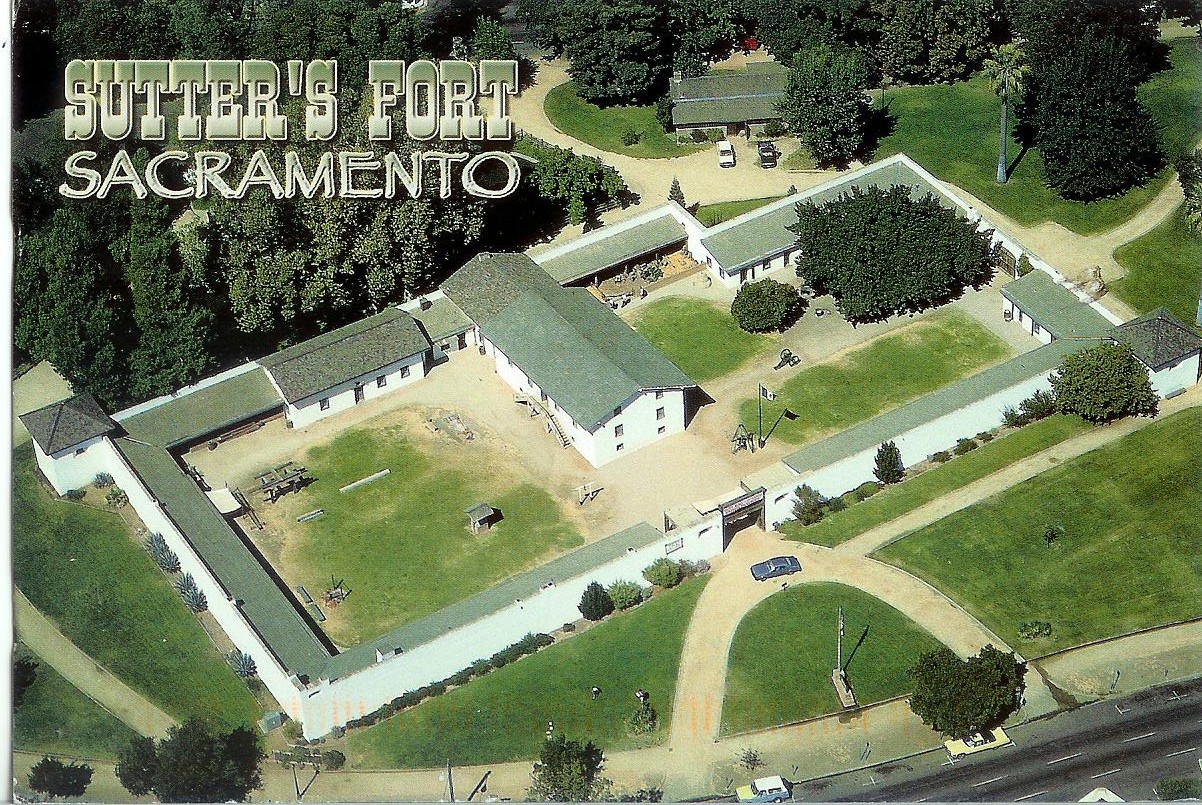 The central courtyard. In its heyday, merchants paid a high premium for space inside the fort, since it was a center for activity in the region, and was well-protected from attack. 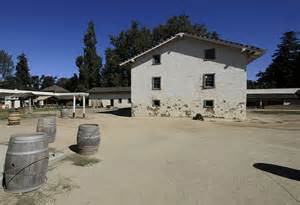 Cannons firing at Sutter's Fort. By the late 1840s, the fort may have had up to 24 cannons, purchased or reclaimed from various ships and other facilities. Many came to Sutter after he purchased the assets of Fort Ross. 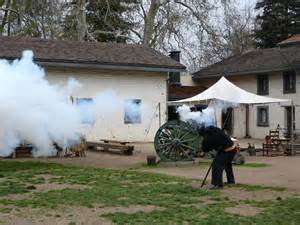 John Sutter's personal desk, on display at Sutter's Fort. The "Casa Grande," John Sutter's administrative headquarters, was the only original building of the fort to survive decades of neglect. 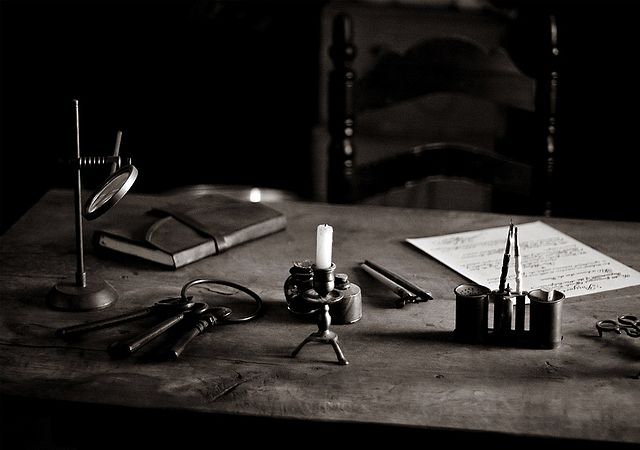 John Augustus Sutter, circa 1850. The Swiss-American immigrant finally achieved his ambitions of an agricultural empire in the 1840s, only to see them smashed during the Gold Rush of 1848-49. 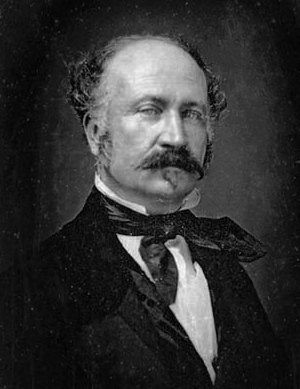 The fort in 1849, in a painting by John Hovey. Tens of thousands of acres around the fort were owned by Sutter, and were not developed until after he began to sell off land during the Gold Rush to pay his debts. 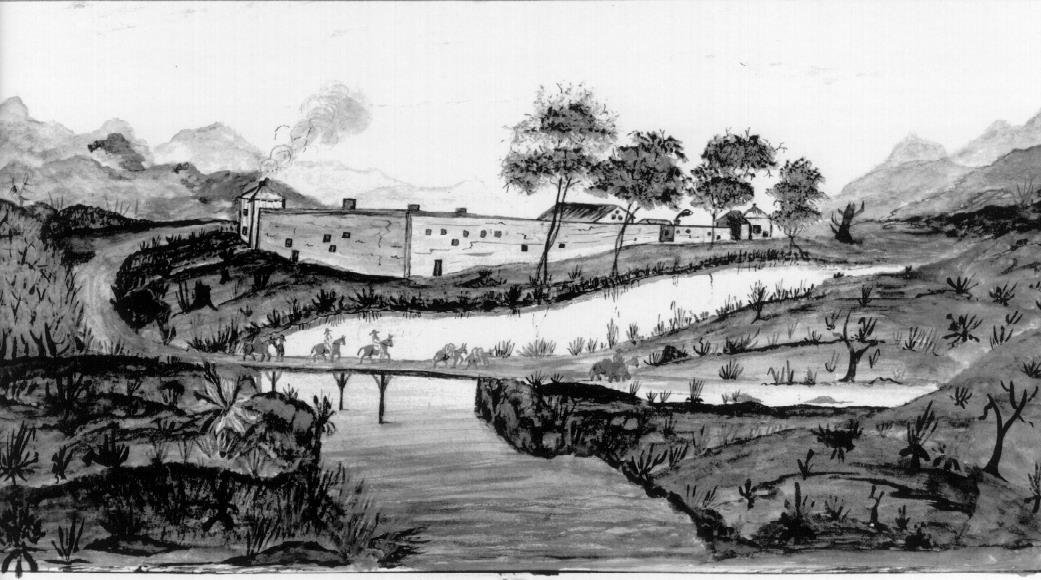 By 1854, the fort was already in disrepair, as Sutter had gone bankrupt two years earlier. Note the crumbling walls. The land around the fort was divided into lots and sold, becoming the city of Sacramento.(Society of CA Pioneers). 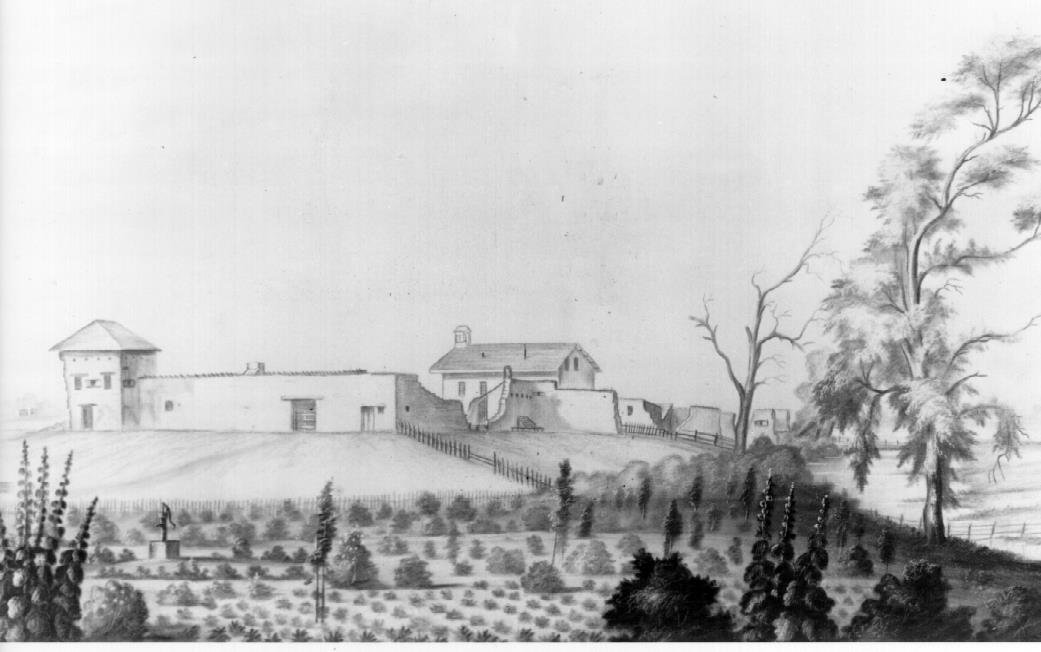 The Casa Grande's condition before restoration. A 3-story nerve center for Sutter's operation, it contains the office in which James Marshall presented to Sutter the gold nuggets that began the Gold Rush.

A map of Sutter's initial Mexican land grant. He later purchased additional land, expanded his holdings, and was at one time the most powerful man in northern California. 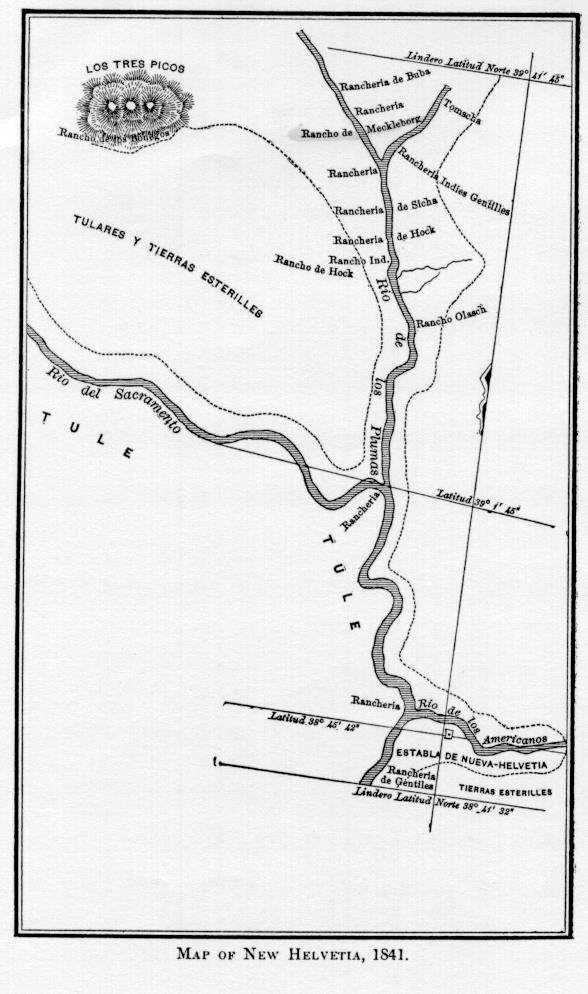 While the fort was being built, Sutter and his workers lived in tule reed houses, perhaps like this Chumash reconstruction at Mission La Purisima in Lompoc. (Flickr. Credit below). 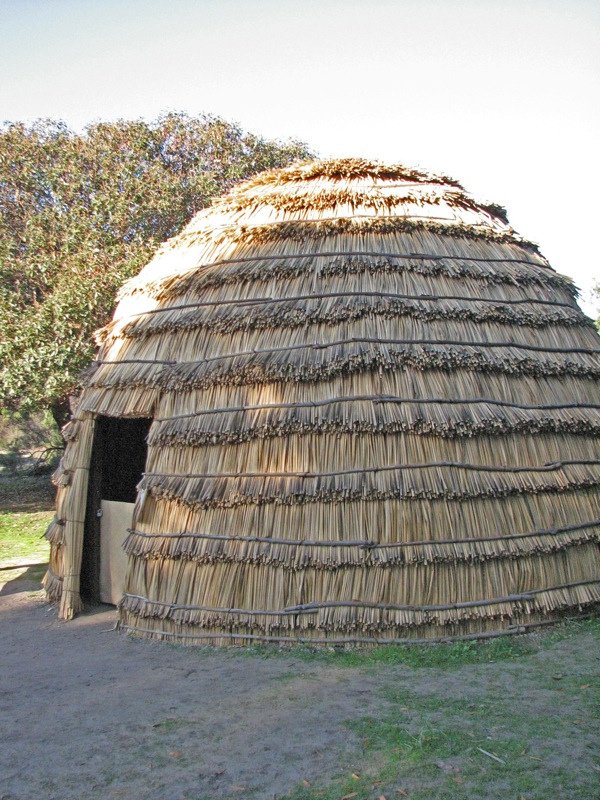 The location of Sutter’s Fort near downtown Sacramento indicates its central role in the development of the city from its earliest days, forming the nucleus around which the city would grow as prospectors flooded in during the Gold Rush of 1849. Ten years prior, however, John Sutter was simply the first non-Native American settler in the region, just beginning to build the gargantuan estate that would define the experience of most American pioneers as they arrived in the northern tracts of Mexican-ruled “Alta California.”

Originally born in Switzerland in 1803, Sutter had failed at several business ventures in his native Europe, then Indiana, New Mexico, and Oregon. Hearing of opportunities in California, he finally arrived in the Mexican territory after a circuitous route through Hawaii, the Sandwich Islands, and Russian-owned Alaska before landing in Alta California’s capital of Monterey in 1839--having procured numerous letters of recommendation, credentials, and a dubious story about having been a Captain in the Swiss Guards. Mexican governor Juan Bautista Alvarado saw an opportunity in the 36-year old Swiss-American and granted him land on the northern border of Alta California, provided that he renounced his American citizenship and stayed on to develop the land for at least a year. Alvarado hoped to make Sutter’s fiefdom a buffer between the sparsely populated Mexican territory and encroachments from the Russians and Indian tribes farther north.

With the grant in hand, several well-provisioned boats, and roughly a dozen companions (mostly Kanaka Indians from Hawaii), Sutter sailed up the Sacramento River from San Francisco until he found a site in present-day Sacramento, on the banks of a watercourse he soon christened the American River. For the first year, the pioneers lived in tule huts, not unlike those of the Kanaka, but soon work began on the famous fort itself, as Sutter feared raids from hostile tribes. His workforce grew as American settlers trickled over the Rocky Mountains--these were usually welcomed with open arms (though Alvarado had placed Sutter to the north in part to deny entry to American incursion) and often employed at the fort in supervisory roles.

The bulk of the manual labor came, in fact, from Native Americans, of whom Sutter may have kept up to 600-800 in forced labor and slavery. Raids and kidnappings obtained more slaves for Sutter to sell, or trade as gifts to pay off his debts. And a number of eyewitness accounts detail the abysmal, unsanitary conditions in which his Indian slaves were housed and fed. Sutter is also documented as having instigated several bloody massacres against local tribes he believed hostile, such as the Kern and Sutter Massacres. A German immigrant who leased land from Sutter reported:

“When Sutter established himself in 1839 in the Sacramento Valley, new misfortune came upon these peaceful natives of the country...Those who did not want to work were considered as enemies. With other tribes the field was taken against the hostile Indian...The villages were attacked usually before daybreak when everybody was still asleep. Neither old nor young was spared by the enemy, and often the Sacramento River was colored red by the blood of the innocent Indians, for these villages usually were situated at the banks of the rivers. During a campaign one section of the attackers fell upon the village by way of land. All the Indians of the attacked village naturally fled to find protection on the other bank of the river. But there they were awaited by the other half of the enemy and thus the unhappy people were shot and killed with rifles from both sides of the river. Seldom an Indian escaped such an attack, and those who were not murdered were captured. All children from six to fifteen years of age were usually taken by the greedy white people. The village was burned down and the few Indians who had escaped with their lives were left to their fate.”1

The 18-foot tall, 3-foot thick adobe walls of Sutter’s Fort, guarded at the corners by two-story watchtowers, made the possibility of reprisals remote. Sutter lacked not for weapons, either: in September 1841 he purchased the assets of Fort Ross from the departing Russians, gaining several dozen muskets and a number of cannons—making Sutter’s Fort one of the best-armed outposts in California. Inside the walls stood Sutter’s 3-story Casa Grande, the headquarters from which he managed his operations, along with a bakery, gristmill, blanket factory, and several workshops. Some structures had been disassembled from the vacant Fort Ross, transported to Nueva Helvecia, and reconstructed inside Sutter’s Fort. The outpost’s corner watchtowers resembled those of Fort Ross, but were clad in adobe rather than redwood.

The Fort became the center of European civilization in Central California. Sutter issued Mexican passports, paid for advertisements encouraging settlers from America (and welcoming an American scouting party under U.S. Army officer John C. Fremont in 1844), Germany, and Switzerland, and organized a guard of 50 Native Americans with muskets and uniforms to protect the fort. In 1846, the Fort was briefly seized by U.S. Army forces affiliated with Fremont. It was a small inconvenience for Sutter, and he even helped organize an expedition with Army Captain Edward Kern to attack a number of Indian tribes in March 1847. Sutter and thirty volunteers aided in the “Sutter and Kern Massacres.”

Sutter’s golden age was not to last. American troops soon returned his fort, but in 1848 Sutter’s eccentric millwright, James Marshall, discovered gold in nearby Coloma. Word got out despite efforts to keep the discovery secret, and soon prospectors and squatters were pouring in from the Eastern United States to seek their fortunes. Much of the land where gold was suspected to be found was Sutter’s—land which the prospectors felt Sutter had no right to—since it had been a grant from the defeated Mexican government. Worse still, Sutter’s employees fled their posts to search for gold themselves. The Fort fell into disrepair and Sutter was bankrupt by 1852, his crops and herds devastated by poachers and squatters. In 1857, he lost much of his land in a California court case, and what was left he deeded to his son, who divided and sold the land in lots to found the town of Sacramento.

Retiring to a secondary property, Hock Farm, a few miles south of Yuba City, Sutter subsisted there on a state pension until 1865, when his house was burned down. He spent the rest of his life seeking reparations from the U.S. government in Washington D.C. before dying in 1880. Likewise, Sutter’s Fort in Sacramento slowly crumbled until 1890. By then, only the much-deteriorated Casa Grande remained until the Native Sons of the Golden West, a fraternal service organization, recognized its pivotal place in California history and purchased the property.

By 1937, the fort was restored to much of its former self and became a California State Park (sharing space in a Sacramento City Park with the California State Indian Museum), and today hosts a wide variety of events, living history experiences, and educational programs.

3. Sutter, John A. "The Discovery of Gold in California." The Virtual Museum of the City of San Francisco. Accessed February 07, 2018. http://www.sfmuseum.org/hist2/gold.html. Originally from Hutchings' California Magazine, printed November 1857.