Reser Stadium has been home of the Oregon State University Beavers football team since 1953. The stadium was known as Parker Stadium until 1999 when the leaders of the university changed the name to honor athletic donors Al and Pat Reser. The stadium has the largest video board in the PAC-12 conference and a total seating capacity of 45,674, making it one of the smallest stadiums in the conference. 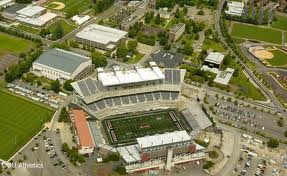 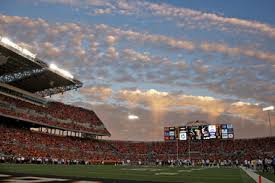 Reser Stadium, the home of the Oregon State University Beavers football team, was first constructed in 1953 and was known as Parker Stadium in honor of Charles T. "Charlie" Parker, a Portland businessman and OSU graduate who played a financial role in the development of the football stadium. No taxpayer funds were used in the construction of Parker Stadium; OSU relied on personal contributions made by alumni and fans. The first game played in Parker Stadium was on November 14, 1953, when OSU defeated Washington State, 7-0 with a single touchdown scored by Chuck Brackett in a 1-yard run.

Parker Stadium had an original seating capacity of 28,000, which was increased to 33,000 after the 1965 Rose Bowl when end zone seating was put in. In 1967, Parker Stadium underwent more renovations when a press box was constructed on the west side of the stadium as well as an addition of seats, making the total seating capacity 40,593. 1967 was also the year the Oregon State Beavers handed national champions USC their only loss of the season, beating them 3-0.

The first round of renovations Parker Stadium began in 1987 with the addition of a 1,500-seat VIP section to the west side of the stadium near the press box. At the time, the stadium still had all-wood bleachers, and these were completely replaced with new aluminum seating. The second phase of the renovations was completed after the conclusion of the 1991 season when $4 million in enhancements were made, including the construction of a new press box and the addition of 12 skyboxes. In addition to 5200 new seats, the stadium also added new restrooms, concession stands, a ticket booth, a new roof which covers the press box and approximately 5,200 seats were added. Although this is one of the smallest Pac-12 stadium, there are plans to expand the total seating to 55,000.

In recognition of a substantial donation from Al Reser, the late president and CEO of Reser's Fine Foods in Beaverton, the Oregon State University athletic program changed the name of the stadium to Reser Stadium in 1999 to honor of Al and Pat Reser. Mr. & Mrs. Reser were both 1960 graduates of OSU, four of their five children graduated from OSU, and all five of their children's spouses graduated from OSU. The funding that they provided was used for academic scholarships, additional budget support for stadium operations, and athletic department facility improvements.