The Schermerhorn Symphony Center, which first opened on September 9, 2006, and was named for the late Kenneth Schermerhorn, is home to the Grammy-winning Nashville Symphony, which was founded in 1946 and which Schermerhorn led for 22 years. Located in downtown Nashville, across the street from the Country Music Hall of Fame and Museum, the Center was constructed at a cost of $123.5 million and totals 197,000 square feet in area. It is Nashville’s premier classical music venue, though jazz and pop music events of many kinds also take place there. Its main venue is the 30,000-square-foot Laura Turner Concert Hall, which features 1,844 seats over three levels and is one of the few American concert halls which extensively employs natural lighting. Despite its relatively recent history, it has already had to withstand two major crises. In May 2010, a devastating flood hit Nashville, causing extensive damage to the center, which cost millions in repairs. In addition, in 2013 the organization faced a debt crisis in which the property was threatened with foreclosure, and a public auction was scheduled. Fortunately, due to the last minute intervention of a patron, a settlement was reached in which the center’s debt was greatly reduced, and the auction was canceled.

The Schermerhorn Symphony Center was built in 2006 and is home to one of the world's premier orchestras. 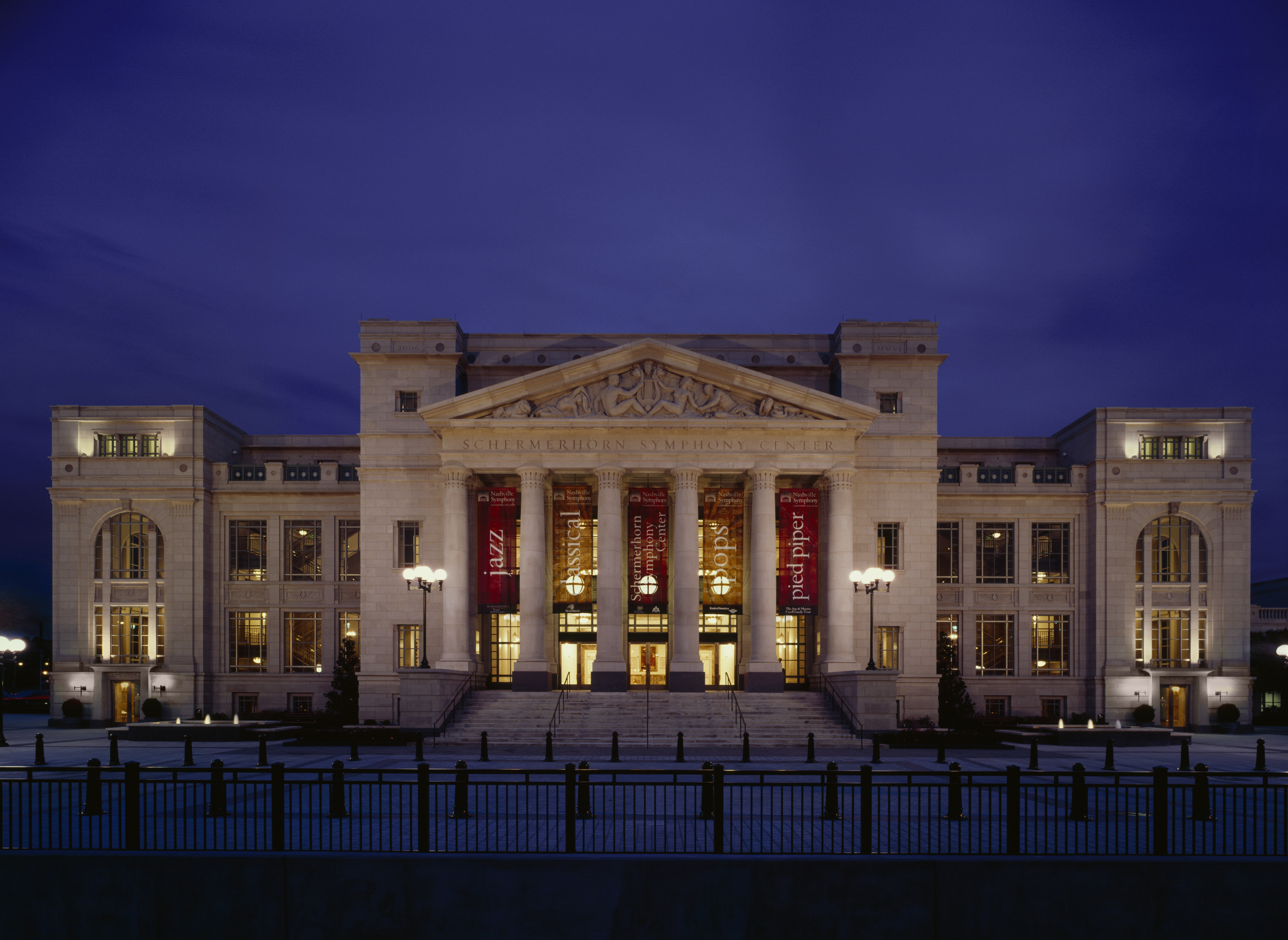 The interior of the Laura Turner Concert Hall. 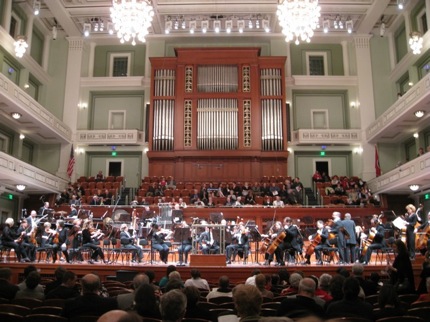 In 1946, a returning World War II veteran named Walter Sharp, with the help of a few music-loving friends, founded the Nashville Symphony. Its first concert was held on December 10th of that year with William Strickland, its first Musical Director, conducting. The orchestra at first performed at Nashville’s War Memorial Auditorium and then, after 1980, at the Tennessee Performing Arts Center. In 1983, Kenneth Schermerhorn was appointed Principal Conductor and Music Director, and over the next 22 years, he led the orchestra to national and international acclaim. The symphony has received 14 Grammy Award nominations for its many recordings, of which it won seven awards. In 2003, ground was broken for a new venue for the Nashville Symphony: Schermerhorn Symphony Center, named after the conductor. (He died in 2005, before the center’s opening in 2006.) The symphony schedules over a hundred events per year at the center.

The center was designed by architect David M. Schwarz in a neo-Classical style, inspired by the city’s traditional architecture. The four-story structure measures 301 by 274 feet, and the 29-foot-high north entrance, which is bordered by columnns, echoes the look of Nashville's civic buildings. Streamlined balustrades, cornices, parapets and other details add a somewhat more modern touch. A 125-foot colonnade on the building's west side encloses a landscaped garden and a café area.

Inside, the center includes the Laura Turner Concert Hall and the Mike Curb Family Music Education Hall, as well as a number of meeting rooms. The Laura Turner Concert Hall is designed in a rectilinear “shoebox” shape and boasts superb acoustics. The hall contains three unusual features: natural interior light which streams through 30 soundproofed windows; a motorized seating system, which can convert rows of raked orchestra-level seats for classical music performances into a hardwood ballroom floor of over 5,700 square feet for pop and jazz concerts; and a large, custom-built concert organ with 3,568 pipes. The Mike Curb Family Music Education Hall is a 3,000-square-foot space featuring a 14-foot ceiling and large windows that allow in much natural light, and hosts programs for schoolchildren, small recitals, lectures and other presentations.

The interior decoration of the building contains many interesting and unique designs. These reflect the history of Nashville and the iconography of various supporters of the symphony, as well as that of Laura Turner, the woman after whom the concert hall is named. The sculptural relief panels that decorate the box seats symbolize aspects of Ms. Turner's life, and include a horse, horseshoes, roses, tulips, a musical staff and a keyboard. Pilot's wheel motifs can be glimpsed on the balconies on the north side of the building, alluding to Nashville's traditional barge industry. The flying lyre motif on the building's exterior north facade refers to Apollo, the god of music; the cast nickel-silver coffee beans that appear on the top of each elevator car are a nod to the Cheek family, which founded the company that became Maxwell House; and iris and passionflower designs (Tennessee's state flower and wildflower, respectively) can be seen in multiple locations.

In early May 2010, a devastating flood damaged many of the city's buildings, including the Schermerhorn Symphony Center. The center’s entire basement was flooded by 5.25 million gallons of water, the level of which stopped just four inches short of the Turner hall itself. The water completely destroyed the building’s complex electric control system, its large kitchen area and the contents of its storage rooms. However, the hall was able to reopen for a New Year’s Eve concert in December 2010, headlined by Itzhak Perlman. The total repair cost, at $39.6 million, was slightly less than the original estimate.

In early 2013, the board of the center conceded that the organization was in need of a “comprehensive financial restructuring.” The center had been forced to default on $102 million in bonds used to build the structure. The causes of the organization’s financial crisis were the enormous expense of constructing the center, the economic downturn that began in 2008 and that had negatively affected arts organizations throughout the country, and the flood that forced the building to close for eight months in 2010. An auction was planned in June 2013 to satisfy the organization’s main creditor, Bank of America. However, the situation was resolved shortly before the auction when an agreement was struck between the center and its creditors, which brought the center’s debt down to a more manageable $20 million. Martha Ingram, a Nashville philanthropist, provided the equity to close the transaction.

Mon.-Sat.: 10 am through intermission Sun.: Call for hours