Walden Pond is known as the home to the renowned author, Henry David Thoreau. Walden Pond State Reservation contains approximately 335 acres of protected open space which is managed by Commonwealth of Massachusetts’ Department of Conservation and Recreation (DCR) Forests and Parks system. Visitors head to Walden Pond to partake in the park’s hiking, swimming, fishing, canoeing, kayaking and crossing country skiing activities as well as to learn more about life and achievements of author Henry David Thoreau.

A replica of Thoreau's cabin at Walden Pond. 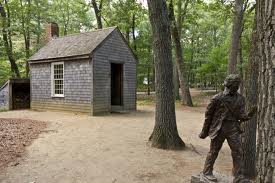 Walden Pond was designated a National Historic Landmark in 1962 for its association with Henry David Thoreau. 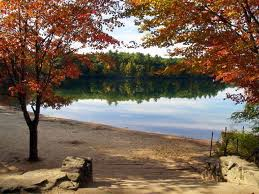 A quote from Thoreau's Walden, published in 1854. The book was received favorably in Thoreau's lifetime and has since become a classic piece of environmental literature. 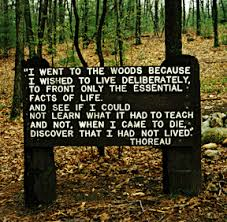 Walden Pond is located in Concord, Massachusetts (about 20 miles west of Boston). The pond was made famous through a book by Henry David Thoreau. It is a kettle hole pond formed by glaciers over 10,000-12,000 years ago.   A kettle hole forms when large pieces of a glacier break away.  The pool of melted ice is surrounded by the sand and gravel and forms a deep hole in the ground.  The melted ice at what is now Walden Pond formed a hole that is 103 feet deep.  Since kettle holes form in this manner, there are rarely any streams or rivers that flow into them.  Essentially, they are like large puddles.

The forested area around the pond was owned by Ralph Waldo Emerson.  Emerson was an essayist, poet, and leader of the transcendentalist movement during the mid-nineteenth century.  Under the mentorship of his good friend Emerson, Thoreau asked if he could live at Walden Pond as part of an experiment.  He used the solitude to become one with nature and to ponder his purpose on earth.  All of his thoughts are documented in his book "Walden Pond."

During the experiment, Thoreau resided on the north shore of the pond for just over two years. He finished building his house in July 1845, moved in right away, and finally ended the experiment in September 1847.  He built a small, modest cabin with only the basic necessities.  He spent much of his time gardening, reading, writing, and surveying the pond.  He documented his experience in nature.  As part of his writing, he encouraged others not to tamper with their natural environment. A few years after the experiment was complete, he published his book Walden Pond (1854).  The book has become a national classic read by young scholars across the country.  Because of the books success, Walden Pond State Reservation was added to the National Register of Historic Places in 1966.

After Thoreau’s experiment was completed, Walden Pond was turned into a public park.  Visitors traveled to the pond to partake in its recreational activities, including boating and hiking.  The Fitchburg Railroad had laid tracks nearby before Thoreau began his experiment.  In 1866, the railroad company constructed an excursion park on the shore at Ice Fort Cove which included concession stands, swingsets, bathhouses, boats, a dining hall, a baseball diamond and a cinder track for running and biking.  People flocked to the park for group gatherings, festivals, and fundraising events. Unfortunately, the park burned to the ground in 1902 and was never reconstructed.

The fire didn’t stop people from visiting the park.  In 1913, the Town of Concord began offering swimming lessons on the pond and new bathhouses were built to accommodate the 2,000 daily guests that the park entertained in the summertime.

The Emerson, Forbes, and Heywood families still owned much of the land adjacent to the pond.  In 1922, they granted a total of 80 acres of surrounding woodland to the Commonwealth of Massachusetts, with the condition that the state preserve "the Walden of Emerson and Thoreau, its shores and nearby woodlands for the public who wish to enjoy the pond, the woods and nature, including bathing, boating, fishing and picnicking."

According to Thoreau, the legacy of Walden Pond is understanding of the most basic ambition in life:

"I went to the woods because I wished to live deliberately, to front only the essential facts of life, and see if I could not learn what it had to teach, and not, when I came to die, discover that I had not lived. I did not wish to live what was not life, living is so dear; nor did I wish to practice resignation, unless it was quite necessary. I wanted to live deep and suck out all the marrow of life, to live so sturdily and Spartan-like as to put to rout all that was not life, to cut a broad swath and shave close, to drive life into a corner, and reduce it to its lowest terms, and, if it proved to be mean, why then to get the whole and genuine meanness of it, and publish its meanness to the world; or if it were sublime, to know it by experience, and be able to give a true account of it in my next excursion."  From Walden Pond (1854).