The home of Ohio State wrestling, and former home of the university's basketball team. Named after Lynn St. John who was the men's basketball coach from 1911 to 1919, and then athletic director from until 1947.The arena was built in 1956 with a seating capacity of 13,276. 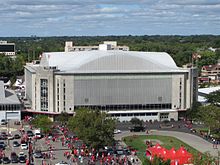 During the time in which St. John was in full operation, the basketball team won the 1960 basketball national title. During that same span the Buckeyes won four straight big ten conference titles from 1960-1964 coached by Fred Taylor.
Although the basketball  team moved to a new venue, St. John is still the home of gymnastics, men and women's volleyball, and wrestling. Since wrestling won its first national title in school history, crowds are coming back to the well-loved St. John arena.
St. John has always been home to some of the truest Buckeye traditions. Every Saturday home game there is an event called skull session. Skull session begins two hours before the game when the band and the football team meet for a pep rally. The event started in 1932 and has been a staple ever since. The Best Damn Band in the Land plays fan favorites and then allows the football team to speak before heading into war.