This bridge was completed in 1929 and replaced a previous bridge that was constructed over seven years and completed in 1895. That bridge was completed by the Louisville and Jeffersonville Bridge Company at a cost of $2.5 million. The company was forced into receivership owing to several deadly accidents and rising construction costs, leading to the bridge's acquisition by the "Big Four"--the Cleveland, Cincinnati, Chicago and St. Louis Railway. Thanks to the efforts of both cities, the Big Four Bridge operates as a pedestrian and bicycle bridge across the Ohio River that connects Louisville to Jeffersonsville. The former railroad truss bridge was utilized by the Cleveland, Cincinnati, Chicago, and St. Louis line until 1968. The bridge was opened to pedestrian traffic following the creation of pedestrians walkways in 2013 and is popular among residents and visitors to the two cities both during the day and at night when LED-lighting provides a light show across the water. 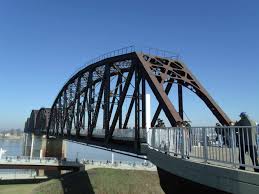 In 1885, investors in Jeffersonville began work on a railroad connection across the Ohio River to Louisville,. By 1887, the Louisville and Jefferson Bridge Company had formed and obtained charters from both states. On October 10, 1888, the company finalized the location of the bridge and began the construction process. Unfortunately, the building of the bridge was beset by multiple tragedies, with a total 37 workers dying during the construction of the bridge.

The first tragedy struck when twelve workers on a pier died, after a caisson failure. Later, four more workers died a few months later when another caisson broke. The worst tragedy occurred on December 15, 1893, when truss collapsed throwing 41 workers into the icy Ohio River. A ferry was passing by and after nearly hitting the struggling workers, the startled crew rushed to rescue twenty of the workers. Despite their efforts, 21 workers perished in the Ohio River that day. These tragedies led to changes in the construction process and stronger reinforcement of the bridge's main supports to prevent further collapses.

The bridge was completed in September 1895 at a cost of $2.5 million. Owing to the significant number of accidents and lives lost, the Louisville and Jeffersonville Bridge Company was forced into receivership and the bridge was sold to the "Big Four"--the Cleveland, Cincinnati, Chicago and St. Louis Railway.

From its opening until 1968, the bridge was used continuously for freight train traffic. Starting in 1905, passenger travel also commenced with interurban rail lines crossing the river. The 1895 bridge was replaced in 1929 and continued to serve rail traffic until the 1960s. The Big Four's parent company, New York Central, merged with Penn Central in 1968. The new owners decided that the cost of maintaining the bridge was not justified and rail traffic was rerouted elsewhere shortly thereafter. The bridge slowly fell into disrepair and the approaches to the bridge were demolished in 1974.

The remaining bridge was an eyesore for many years but some residents saw potential for creating a pedestrian walkway. The first attempt to restore the bridge was made by Charles Hammond in 1982, who purchased the bridge and proposed to turn it into condos and shops. However, unable to pay the required taxes, in 1987, the bridge was ultimately auctioned off to a charity called Bridge the Gap that lit the bridge yearly around Christmas time to advertise for a toy drive.

However, in the 1990s, a plan began to incorporate the bridge in the Waterfront Park as a "rails to trails" project. In 2006, construction began to convert the bridge into the bicycling and pedestrian bridge that it is today. Construction on the main part of the bridge was completed in 2010 at $6.8 million, and the elevated entryways to the bridge were completed in 2013. Today the bridge is a popular stop for both tourists and locals, who use the bridge to view the river and to exercise. At night, the bridge, with its bright LED light show, provides a backdrop to the rest of the riverfront area.