Established in 1869 by the Freedman's Bureau after the Civil War, the Howard Public School served African American children in Columbia, South Carolina. It was the only school for Black children in the area until 1916, catering to 800 young adults of various grades. Named after Oliver Howard, the head of the Freedman's Bureau Department of Refugees, Freedom, and Abandoned Lands, the school was a fixture in the African American community, even after its change of location in 1924.

Sign marking the site of the Howard Public School in Columbia, South Carolina. 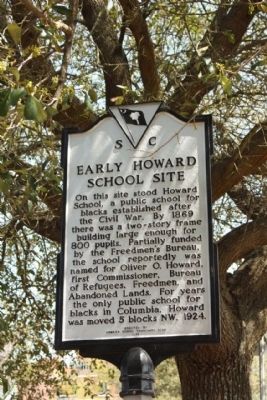 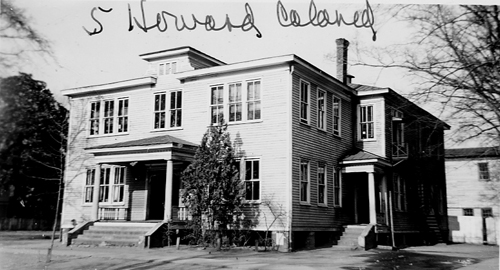 With the help of Oliver Howard, the head of the Freedman's Bureau Department of Refugees, Freedom, and Abandoned Lands, the Bureau, along with the New York Society were able begin construction on the Howard Public School in 1867. Before the no person or organization with means had taken interest in the education of Black children in the Columbia area, but after $10,000 spent and 2 years on construction the Howard School was finished. The school had been built in the shape of an "H" so as to honor Oliver Howard farther. Around 600 students attended the first year and the school become a fixture in the African-American community of Columbia.

Like many Black schools built during reconstruction, the school slowly deteriorated after a lack of continued funding. Debates in 1881 and 1882 produced less than favorable to outcomes for education. After heavy debate pertaining to the extent of South Carolina state money that should be used to benefit African American schools, the Howard School was refurbished in 1883 by money put aside by the state to cater to the education of  Black children. It was decided at this time that Black children would attend Howard and the white children in the area would attend a school close by, Male Academy on Laurel Street and Female Academy, on Washington Street. Despite the misleading titles the schools were not separated by sex, but Male Academy served older students while Female younger. The white schools employed 11 teachers.

The Black school would employ 8. Chosen for its central location, on the corner of Lincoln and Plain streets, and its history as a place of education for African Americans the Howard School was reopened. Intially, there was a huge influx of students because it was the only school of its kind in the area. Superintendent David B. Johnson was forced lease out classrooms from the neighboring Columbia Academy. By the end of 1883 the school had 350 students.

As typical of any school at the time curriculum was based on developing language, math, history and other technical skills and classes grew in difficulty over time. In the first grade students were taught their numbers 1-100 and were expected to be able to the recite them backwards and forwards, and count them up and down in increments. By second they were reading and writing and were familiar with the local South Carolina landscape. Third grade called for geography of the world and Fourth money, both American and English currencies. History was saved for the Sixth grade students. All grades learned music; boys were taught the drums, and girls the piano.

Howard school would continue to develop its reputation as the premier place for the education of Black children in the Columbia community until 1916 when it was closed.