Benjamin Tillman was a South Carolina senator, populist, and outspoken defender of white supremacy who dominated the state's politics in the late 19th and early 20th centuries. Known by his nickname "Pitchfork Ben" after threatening to impale Grover Cleveland, Tillman rose to prominence after leading the Red Shirts, a white supremacist paramilitary group that took control of the state by force in the final years of Reconstruction. Though he enjoyed great support and popularity among white residents of the state throughout his life, his virulent racism and occasional advocacy of violence against African Americans has marred Tillman's legacy and made this statue a subject of controversy. During the early 20th century, most white South Carolinians continued to revere Tillman and on May 1, 1940, many came to celebrate the dedication of this bronze statue. At that time, the Democratic Party and most white citizens celebrated the life and legacy of Benjamin Tillman, and few thought twice about the propriety of erecting a statue to Tillman on the grounds of the state capital. Though troubling to many today, Tillman's statue continues to overlook the city--a reminder of the state's past that some wish to eliminate. Others believe it would be wrongheaded to sanitize the past by removing this reminder of the state's troubled history and hope to add markers that offer historical context. Other residents hope to replace the statue with one of a civil rights leader or other prominent South Carolinian. 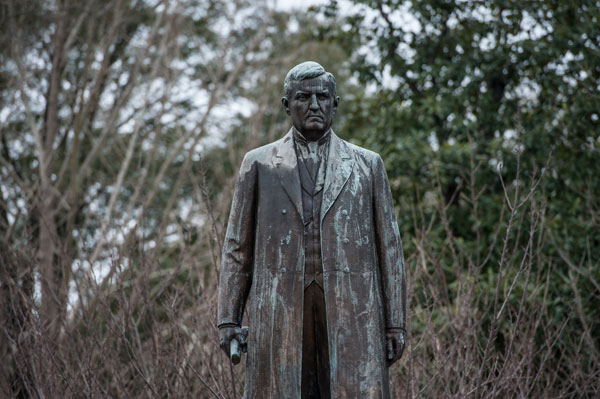 Chicago Tribune cartoon, published November 27, 1906, demonstrating the Janus-like duality that could lead Tillman to deliver a tirade somedays while remaining calm on others. 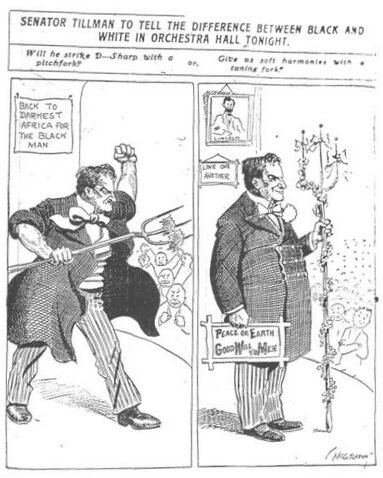 Tillman was born on August 11 of 1847 in Trenton, South Carolina into a wealthy planter family. Both of Tillman’s parents were English. His mother, Sophia Tillman, was active in society. While his father, Benjamin Ryan Tillman Sr. provided the family with a comfortable lifestyle from a plantation of 86 slaves and a popular Inn. Tillman was the youngest of eleven siblings, seven boys, and four girls. Most of his older brothers would die during his adolescence but one, George Tillman, would live to serve in the South Carolina State Senate and then later in the United States Congress. Benjamin Jr. would follow in the footsteps of his bother and also serve in political office, though his legacy would prove to be far more impactful and for that reason, all the more controversial.

A gifted student, Tillman was sent to a boarding school in the neighboring town of Edgefield where he remained until he was 16. At that point, Tillman left to join the Confederate Army. However, Tillman’s intentions were never recognized due to medical reasons. His right eye contracted a bacterial infection that resulted in its removal. It would be months until Tillman recovered, long after the formal fighting of the Civil War had ended. Tillman then tired his hand at the family plantation business. He purchased land in Florida but the project quickly failed. While in Florida Benjamin Jr. meet Sallie Stark; the two married in 1868 and returned to South Carolina where Tillman would inherit nearly 450 acres of land from his mother. By 1876 Tillman had established himself as a planter, becoming the largest landholder in the county. Sources demonstrate that he often used a lash to punish African American laborers on the plantation.

During the time just before Tillman’s run for office he was involved in a number of race-related clashes that shape his reputation today including the Hamburg Massacre and his verbal defense of lynching. Tillman participated in the killing of seven black militiamen in the Hamburg Massacre and was later quoted having said he'd  “taught the Negros a lesson”1, while celebrating the confrontation at a friend’s dinner. Tillman was also present for the killing of Black South Carolina State Senator, Simon Coker, by a white mob in 1876. Just after these incidents, and partly because of them, Tillman was able to introduce himself into political society. He did so at the South Carolina Democratic convention, in which he fervently supported Democratic candidate for the Legislature Wade Hampton III.

While Tillman's views on race dominate his reputation, for many years he was viewed as a defender of poor white farmers. He was the founder of Edgefield County Agricultural Club and delivered many speeches calling for laws to aid white farmers that made him a viable candidate for South Carolina Governor in 1886. While speaking at a number of events in upstate South Carolina, Tillman advocated for primary elections at a time when nominations were handled internally by the Democratic party that dominated state politics.

Tillman also proposed the idea of a state-run university to educate poor white farmers. It is important to note that Tillman referred only to men when he promoted democratic principles like voting rights and access to education, but these were progressive ideas, for the period, and would shape a considerable portion of his political image. He was, to many, a farmer supporting the interest of farmers.

Tillman won the gubernatorial race of 1890, and later served as a United States Senator after winning the election of 1895. A rising star in Southern politics, Tillman was even considered a candidate for the presidency until he delivered a divisive speech that offended many of the attendees and leaders of the Democratic Party.

Tillman’s governorship saw a decline in the number of lynchings in South Carolina, partly because of his support of law enforcement. However, Tillman once offered to lead a lynch mob while in office and was on record advocating violence against black residents who threatened the status quo. He even bragged openly about his involvement in certain acts of violence against African Americans while in office. While in the Senate, he exclaimed that he would rather see his daughters die than be raped by a black man at a time when hundreds of black men were being lynched for this alleged crime. "I have three daughters, but, so help me God, I had rather find either one of them killed by a tiger or a bear [and die a virgin] than to have her crawl to me and tell me the horrid story that she had been robbed of the jewel of her womanhood by a black fiend" Tillman exclaimed on the floor of the Senate.

Views such as these were often welcomed by whites Southerners, and Tillman enjoyed their approval. However, the same sentiments left him hated by a majority of politicians from the North and West. This polarization almost definitely contributed to Tillman's loss of the Democratic nomination before the presidential race of 1896. That fact, along with his opening speech at the Chicago convention, one riddled with curses, uncomfortable amounts of racism, and blatant southern favoritism, helped earn him the title "wild man of the Senate"3. Even within his own party, Tillman was hated by some who saw him as a classless sectional fanatic.

Tillman died at the end of his fourth senatorial term in 1918 after a hemorrhage of the brain. Washington mourned his death with tributes and ceremonies at the U.S. Capitol. Today, Tillman is still a polarizing character. In the early and mid-20th century, was seen by many white South Carolinians as a tough and principled leader who defended the "Southern way of life," a phrase that became a euphemism for the defense of segregation during the 1950s and 1960s.