In the late 1890s, the Texas Board of Regents determined to establish a summer school for teachers in a cool climate. The Chautauqua Movement was a powerful cultural force in the United States at the time, and so the regents surmised that the best way to obtain a favorable location for their summer school would be to partner with a railroad company, package the school with a Chautauqua, and barter with a Colorado town for a site. Boulder city leaders wooed the Texans by offering to supply land, facilities and public utilities for the assembly. The site for what originally was called the Texas-Colorado Chautauqua was expressly chosen for its spectacular mountain setting and its health-giving environment. The park continues to be home to many lectures and other cultural and educational events.

Colorado Chautauqua in the early 1900s 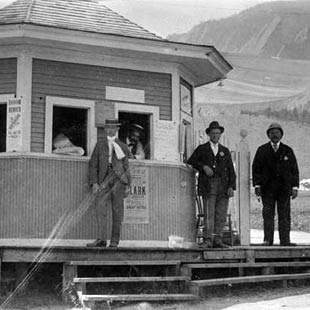 Colorado Chautauqua as it looks today 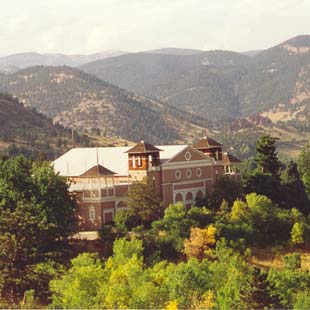 Colorado Chautauqua not long after it opened in 1898 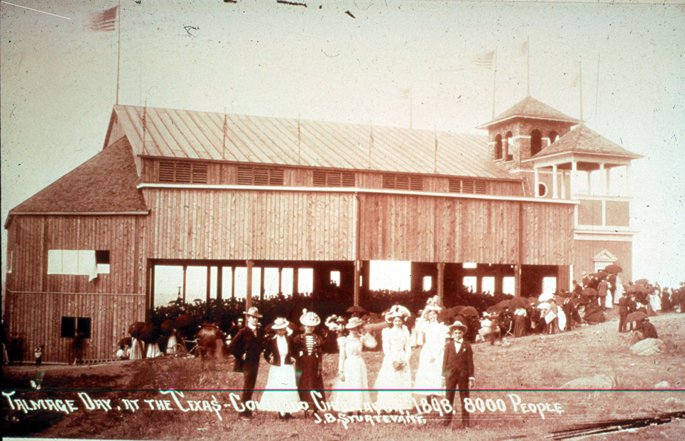 During the late 19th and early 20th century, a number of traveling shows and local assemblies known Chautauqua's occurred throughout the United States. these featured lectures and other activities. Colorado's Chautauqua park is located in Boulder and is home to the state's Chautauqua which started in 1898 and continues today.

In 1897, the Texas-Colorado Chautauqua Association was created in order to give Texas schoolteachers a chance to conduct a summer school and lecture series, but held in Colorado because of Texas's harsh summers. The Chautauqua was placed in Boulder, Colorado because of the city's agreement to provide the necessary land and equipment. The Chautauqua and it's Dining Hall were both completed by the time of the opening of the first Chautauqua season on July 4, 1989. The fee was $75 in 1898 for the entire six-week season. Included was tuition, admission to all lectures and entertainments, all boarding and lodging, and round-trip rail fare to Boulder from Fort Worth, or around Fort Worth, Texas.
In late April 1899 the Electric Street Railway from Boulder to Texado Park construction began and was completed in June of 1899, only about a week before the opening of the second Colorado Chautauqua season. Cars ran every 15 minutes from 6:30 am to 11:00 pm, and the fare was only 5 cents. Between 30 and 40 cottages were available for lodging during the second Chautauqua season, everyone else still resided in tents. People continued to stay in tents until 1916, even though cottages continued to be built. The Women's Christian Temperance Union was involved in the Chautauqua in 1900, along with many other similar ideas because of the prohibitionist cause that was an ongoing theme. Women's suffrage, Populist politics, and a nondenominational Christian message on self-improvement were other related causes.
The Texas-Colorado Chautauqua was reorganized as simply the Colorado Chautauqua with directors to the board all local on December 20, 1900. The Chautauqua continued to grow and popular performers continued to show. John Philip Sousa and his band performed at the Auditorium in the fall of 1904. An average of 40 full evening musical programs were presented each summer in the first 20 years of the Colorado Chautauqua. The Chautauqua became a part of the city of Boulder when the city began to expand, cottages became available for winter renting, and the Chautauqua made itself a part of the district. By the 1970s, the Chautauqua was in crisis. Its buildings were deteriorating, and the attendance and revenue were quickly declining. The lease from 1941 was going to expire in 1981 and talk of what to do with the land varied.
In 1978, Colorado's Chautauqua park was home to a restored outdoor auditorium with live music and lectures. Jazz and bluegrass concerts. That same year was the arrival of the Colorado Music Festival in Chautauqua Park-an annual event that continues to be held at this park. The park is home to musical events featuring composers such as Mozart, Stravinsky, and Beethoven. The park has been home to lectures from local and state leaders, educators, and famous people such as Hunter S. Thompson, Al Gore, and Jesse Jackson.