Iowa state which had the first African American football player in the school history in 1923 played in his first football game on October 6, 1923 . Johnny Jack Trice played for the cyclones against the University of Minnesota in which he was crushed and suffered a broken collarbone and died from internal bleeding 2 days later.

Jack Trice prior to the 1923 season 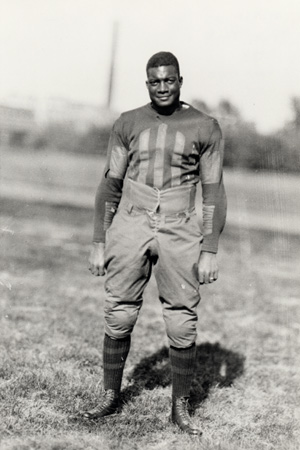 Monument erected by the student body in honor of Jack Trice 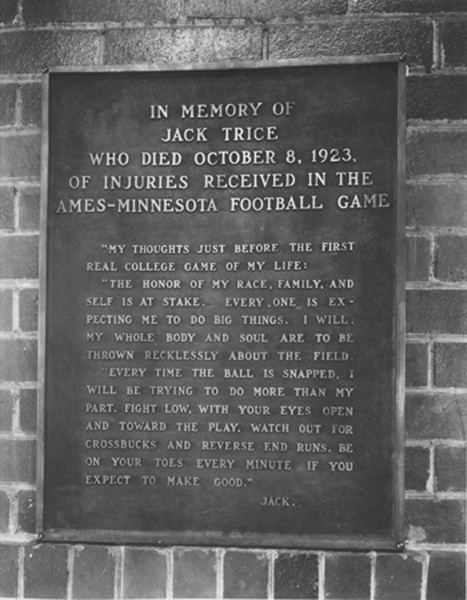 Johnny ( Jack) Trice was born in Hiram, Ohio in 1922 . As a child he was active in sports and demonstrated outstanding athletic prowess at an early age . In 1918 Trice's mother sent him to Cleveland , Ohio to live wit his uncle. He attended East Technical High School where he then began to play football. In 1922 Trice followed 5 of his teammates and former high school coach, Sam Willaman who took the coaching job at Iowa State College. Trice then became the first African American athelete at Iowa State , participating in track and football . He majored in animal husbandry,n with the desire to go to the south and help Black farmers with his knowledge .

On October  6, 1923 Jack Trice played in his first ''real '' college football game against the University of Minnesota in Minneapolis, Minnesota . During the second play of the game, he broke his collar bone. Insisting he was alright and returned to the game . Then in the third quarter , University of Minnesota players forced Trice to the ground which resulted in him being crushed.Trice claimed to be fine but was sent to an area hospital , where the doctors deemed him to be fit for travel. Trice returned to Ames Iowa with his teammates to which he died 2 days later from internal bleeding due to injuries received during the game .

This resulting in the only collegiate field in the United States named after an African American in division 1 standings.