The Lexington Minuteman statue was created by Henry Hudson Kitson and commemorates the stand of colonists against the British on April 19, 1775. The statue is located at the Lexington Battle Green in Lexington, Massachusetts (about 14 miles west of Boston). There is some debate over whether the statue was originally intended to depict a common Minuteman soldier or their leader, Captain John Parker. Generally, it seems to be accepted as Captain Parker. Parker was said to have stated "Stand your ground. Don’t fire unless fired upon, but if they mean to have a war, let it begin here" when addressing his men before the shots were fired that began the American Revolution.

The Lexington Minuteman has stood this ground since the statue's dedication in 1900. 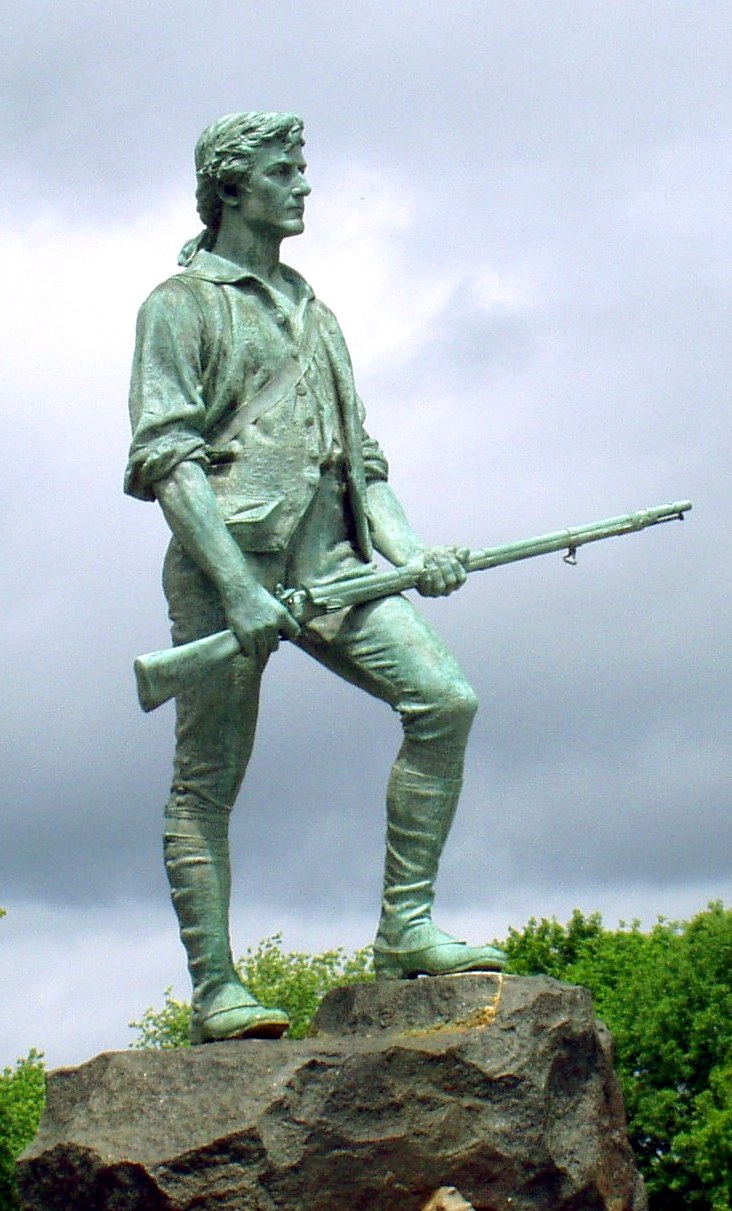 "Stand Your Ground" depicts the first fighting of the Revolution on Lexington Common (Oil on hardboard, by Don Troiani, 1985) 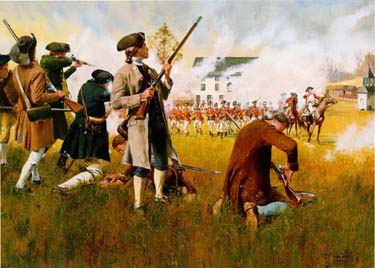 This is an early photograph of the Lexington Minuteman, taken two years after its unveiling in 1900. Courtesy of the Library of Congress. 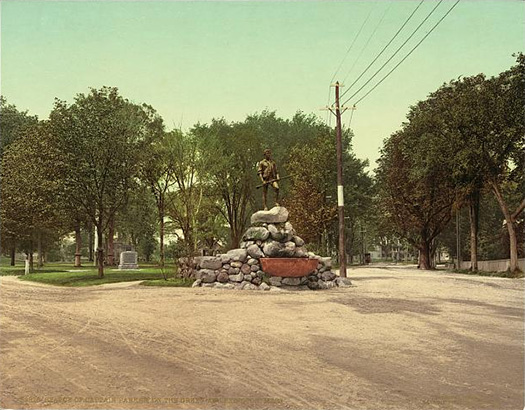 The statue of the Lexington Minuteman stands on the southeast corner of the Lexington Battle Green at the intersection of Bedford Street and Massachusetts Avenue.  It was unveiled on April 19, 1900, the 125th anniversary of the historic first battle of the American Revolution. The statue was created as a memorial to the Minutemen’s heroics, while its fountain served as a source of water for people and their animals.

The town of Lexington selected Henry Hudson Kitson to sculpt the Minuteman statue.  Kitson was an English-born artist who emigrated to the United States around 1877-1878.  He was the creator of several public monuments in and around the Boston area as well as several more in the Vicksburg National Military Park in Mississippi and Louisiana. The statue depicts a colonial farmer standing on top of the native fieldstone base. Tradition also claims the statue represents Captain John Parker, the leader of the Lexington militia in 1775. Various men served as models for the Minuteman, including Medford resident Arthur Mather.  The base symbolized the strength of the colonial patriots living in Massachusetts during this era. The statue also included a drinking trough for horses, which has since been converted into a planter. The total cost of the monument was just over the amount bequeathed by Hayes ($10,853). In 1989, the Town of Lexington constructed a small traffic island across from the statue to give tourists a safe spot to take their photographs.

Minutemen were a group of patriotic individuals who provided a highly mobile and rapidly deployed force that allowed the colonies to respond quickly to the threat of war. In Massachusetts, colonial law required all able-bodied men between the ages of 16 and 60 to be part of the local militia. The minutemen consisted of specially-trained volunteer companies within the militia. They were expected to keep their weapons and equipment with them at all times. In the event of a conflict, they were ready to jump into action at a minute's warning, hence their nickname.

While the Lexington Minuteman is often associated with Captain John Parker, whose men participated in the first skirmishes of the American Revolution, he actually led a group of militia. On April 19, 1775, Parker's militia met British troops arriving at Lexington. The two sides exchanged fire leaving 8 militiamen dead and 10 wounded, while one British soldier was injured in the fighting. Word quickly spread that the British were marching to Concord, where additional militia companies, along with minutemen, attacked. The Americans continued their attacks as the British retreated back to Boston, passing through Lexington once again along the way. These clashes have become known as the first battles of the American Revolution.

The minutemen, notable for their bravery, patriotism, and skill, are among the most well-known figures of the American Revolution, often symbolizing the American spirit. The statue at Lexington is part of a larger history of commemorating their service to the United States.