Across the street from the statue is the B.F. Hastings Building, which served as the western terminus of the Pony Express. From this point, mail usually proceeded to San Francisco by ferry. 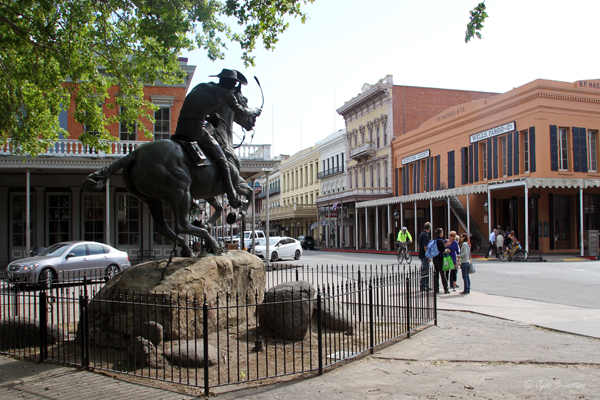 A closer look at the statue. Sculptor Thomas Holland used his 11-year old nephew as a basis for the young rider. Horse and rider comprise 8.5ft of the statue's total 15ft height. (Library of Congress) 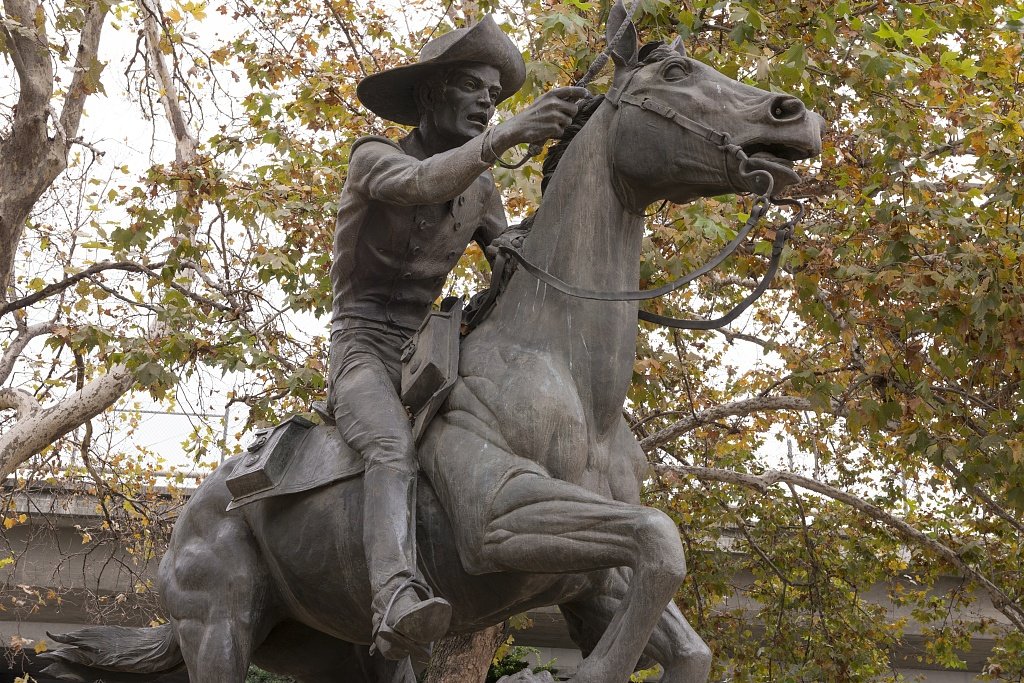 A newpsaper advertisement calling for Pony Express riders. Lightweight men were favored (not unlike modern horseracing jockeys) to lower the weight carried by the horse during the long, strenuous ride. 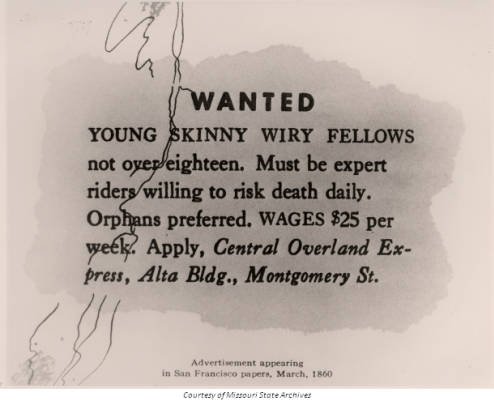 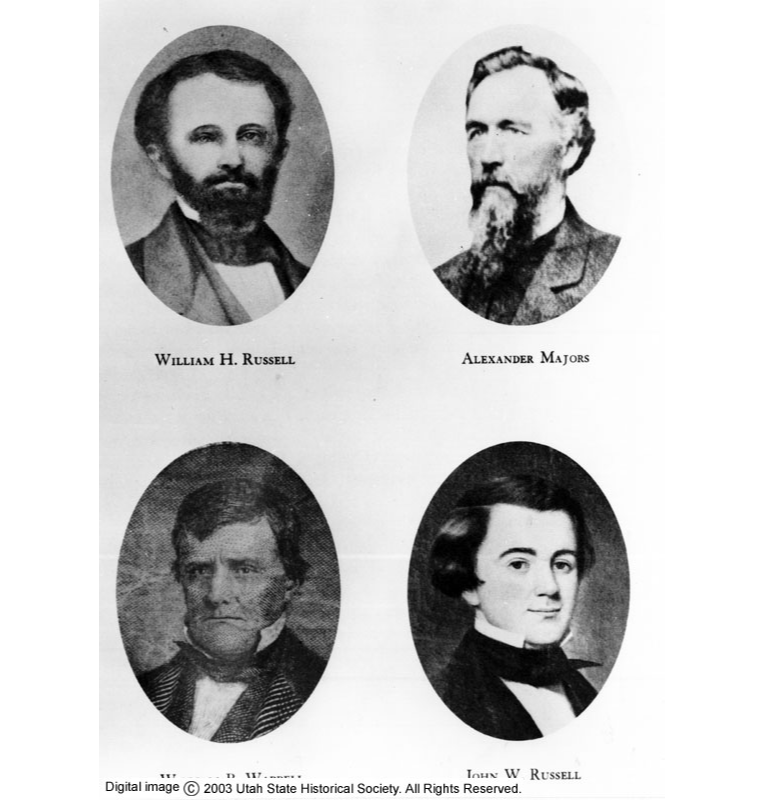 An overview of the Pony Express's route from Missouri to California. News came by train or telegraph to St. Joseph, MO from the east coast. Once riders arrived in Sacramento, a ferry carried mail to San Francisco. 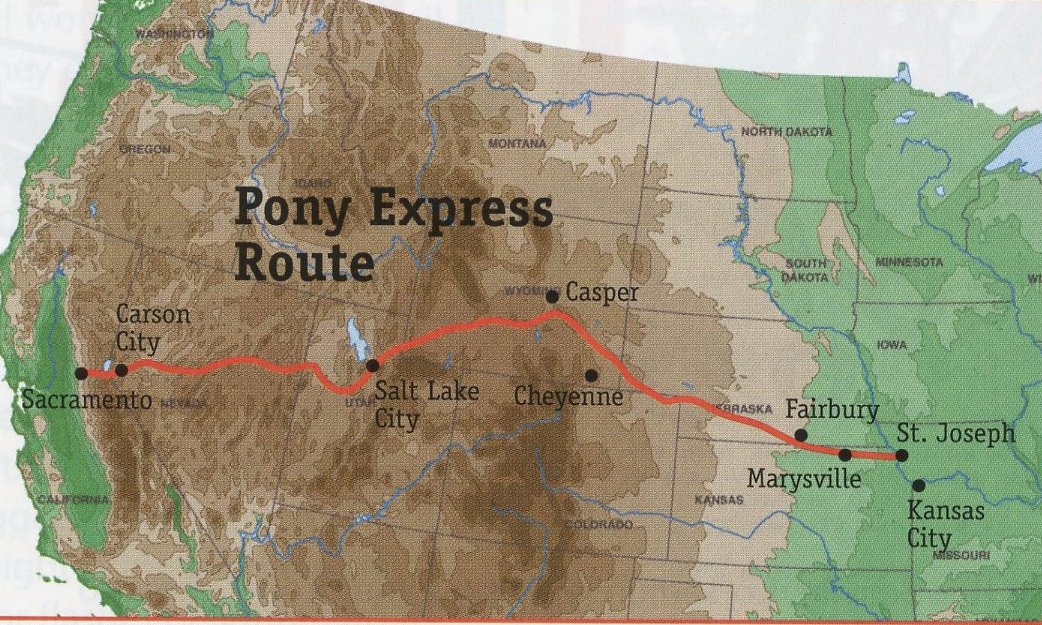 A drawing by Edward Vischer depicts all three forms of overland communication in the 1860s. Vischer is one of the best primary sources of visual materials from the era (Claremont Colleges). 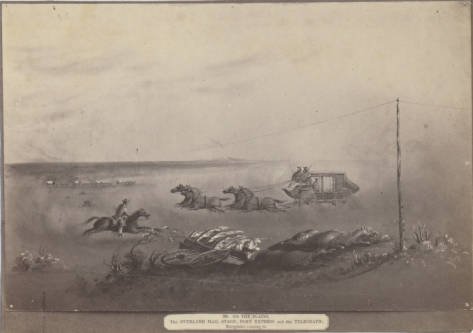 The first film about the Pony Express was released in 1925--and largely continued the practice of romanticizing the men who rode for the brief but influential delivery service (MOMA). 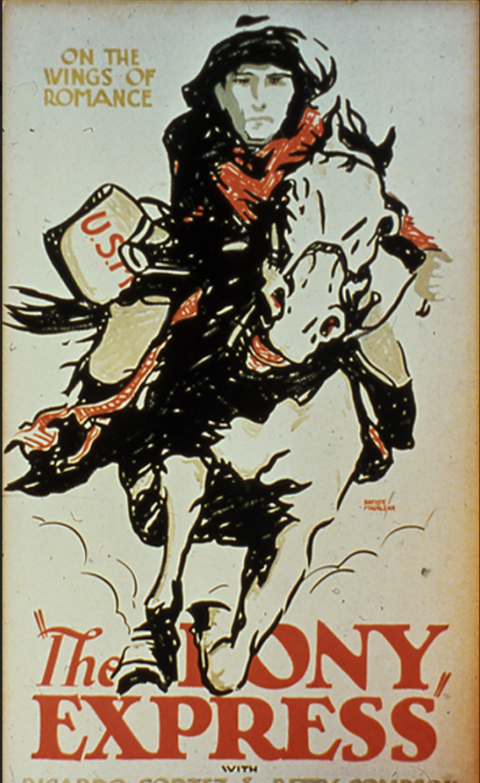 Advert in the Sacramento Daily Union from April 16, 1860, only a few days after the first Pony Express rider arrived in the city with great fanfare and celebration.

An April 14, 1860 report in the Marysville Daily Appeal details the intense revelry that accompanied the very first Pony Express's arrival in San Francisco. 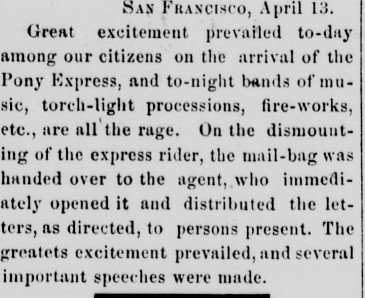 “Using a good thesaurus, a little imagination, and a flair for the written word, many authors simply rewrote, reorganized, and re-romanticized manuscripts about the Pony Express...This process has gone on so long that the nexus of myth and fact has become too strong to break.”2

Though this mythologized history has often boiled the Pony Express down to a heroic tale of intrepid horse and rider, the company’s short, complicated life also involves war, debt, embezzlement, scandal, bankruptcy, and eventually, obsolescence.

Consisting of a series of relay stations located along the route that crossed the Great Plains, the Sierra Nevada mountain range, and the Rocky Mountains, the Pony Express mail service delivery system was instrumental in reducing the transit time of mail from coast to coast. Prior to the opening of the Pony Express (whose official title is the Central Overland California & Pike’s Peak Express Company) in April 1860, transcontinental mail could not be delivered faster than 21 days by sea or land--and often took nearly a month. The citizens of the newly-minted state of California (which joined the union in 1850) demanded better: 75,000 Californians signed a petition in 1856 requesting that Congress improve the speed of their mail service.

The job would eventually fall to three men: William H. Russell, Alexander Majors, and William B. Waddell--frontier entrepreneurs who had combined their independent freight businesses in 1854 to be eligible for a lucrative U.S. Army contract. For two years their company dominated the frontier freight industry along the American frontier, until friction between Mormon settlers and the U.S. government exploded into armed conflict in the Utah War of 1857-58. Though few people (if any) were killed in armed clashes, the Mormons sought to prevent U.S. troops from reaching Salt Lake City by cutting their supply lines. Several of Russell, Majors, and Waddell’s wagon trains were utterly destroyed by the Mormon Nauvoo Legion, and bankruptcy loomed for the freight moguls.

In a move typical of his cavalier business practices, William Russell borrowed money on the company’s credit without consulting his partners and proceeded to finance a massive passenger and mail delivery service to the booming gold fields of Pike’s Peak (in present-day Colorado). The venture failed catastrophically, but when an opportunity arose to bid on an express mail route to California, Majors and Waddell had little choice but to throw in with Russell in an attempt to save their company.

In a matter of months, the company borrowed vast sums of new money and built a chain of as many as 153 supply and relay stations, requiring 200 stationkeepers and 80 riders. A one-way trip spanning the 1,900 miles from St. Joseph, Missouri to Sacramento, California required 75 horses. The desperate company, now colloquially known as the “Pony Express” took out newspaper advertisements across the country trumpeting its ten day delivery time--before they had actually ever accomplished it.

The hype succeeded. On April 3, 1860, the first Pony Express riders dashed out from their respective termini at opposite ends of the route. Bands played, speeches were given, and crowds lined their routes out of St. Joseph’s and Sacramento. No less fanfare was accorded when the Pony Express arrived at its destination. A San Francisco paper reported that the state legislature in Sacramento adjourned to honor the occasion; reveling in San Francisco lasted through the night. The Daily Alta California gushed,

“One by one the chains of darkness and the desert are broken, and we are brought nearer and nearer to our brethren on the other side of the continent...One of our most glorious advances of late is the Pony Express; its achievements will be famous through the world. Wherever men think, and books are read, there the Pony Express to California will be heard of…”5

Within two months of the Pony Express’s auspicious beginnings, however white settlers and Paiute Indians clashed in the Pyramid Lake War. Through June and July the chain of relay stations was broken in Nevada, and even after the line reopened, troop escorts for the Pony Express riders slowed their pace to a crawl. The service, which already cost more money than it made, suffered terribly. Desperate, William Russell began borrowing money again. By the time he was done, he had borrowed against then-Secretary of War John B. Floyd. In a bid to protect the Secretary from scandal, a family member of Floyd loaned bonds from the government’s Indian Trust Fund to Russell, who in turn used them to borrow more money--and then more. At this point, Russell was knowingly engaged in embezzlement. Nevertheless, he used this new influx of cash to set up a more lucrative large-scale mail delivery contract along the Pony Express’s route to Salt Lake City. When the scandal broke, Russell was arrested.

Throughout Russell’s indictment, he curiously held the general public’s sympathy, emphasizing his claim that the company’s dire financial straits were all due to their losses at the government’s hands during the Utah War in 1858. And when the Civil War broke out in 1861, his case was virtually dropped. Communication between the Northern states and the West Coast became even more essential, and the government could ill afford to lose Central Overland’s mail routes. The end was near, however, as the Overland Telegraph Company began to extend its lines along the route that the Pony Express had so vigorously established. By the end of August 1861, even the partially-completed telegraph’s delivery was beating the Pony Express by two days, and on October 26, 1861 the line was finished, rendering the Express almost completely obsolete.

Despite its checkered history, the Pony Express’s memory in popular culture has often reflected the previously quoted sentiments of the Daily Alta California. Immortalized through the ages by the words of Mark Twain and countless others, depicted romantically in films, and reiterated ad infinitum, the Pony Express continues to be an important cultural touchstone for the American West.

This 15-foot bronze statue, standing across the street from the Wells Fargo History Museum and the original Pony Express terminus at the B.F. Hastings Bank Building, honors the first ride taken by a Pony Express rider out of Sacramento with a large plaque encased in its cement base that says,

“This statue commemorates the glory of the Pony Express, which stated here at 2:45 A.M. on April 4, 1860, when Sam Hamilton galloped into a blinding rainstorm on the first lap of the 1,966-mile trip to St. Joseph, Missouri. During its 18-month existence, its 121 riders and 500 ponies carried 25,000 pieces of mail with the loss of but one pouch. This venture, founded by Russell, Majors and Waddell, ended California’s isolation from the rest of the Union.”

Sculpted by Thomas Holland, a California-born artist known for his depictions of horses (he was an experienced rider and polo player), the piece draws on a number of inspirations. The rider’s garb is based on Mark Twain’s description of a Pony Express rider in his semi-autobiographical 1872 book “Roughing It,” whereas the saddle and iconic mochilla (the unique saddlebag in which riders carried the mail) are based on artifacts from the Santa Barbara Historical Museum. Instead of a historically-accurate skull cap, Holland chose to provide the rider with a more cinematic wide-brimmed hat. The horse is based on Holland’s own polo pony, and the male model was Holland’s 11-year old nephew. The stature was unveiled as part of the many bicentennial celebrations in 1976.