This historic home was constructed in 1895 and is located one block east of the Ebenezer Baptist Church where King's father served as pastor. Dr. King's grandparents bought the house for $3,500 in 1909 and Martin Luther King Jr. was born in the house in 1929. The King family moved in 1941. Shortly after that time, the house was converted into a two-family home. A visit to the home starts with the Visitor's Center at 449 Auburn Avenue, which was built in 1996. The Visitor's Center tour starts with the multimedia exhibit "Courage to Lead" which provides an overview of King's life and involvement in the Civil Rights Movement. Tour guides walk visitors to the home and provide unique stories about King's boyhood and later life. 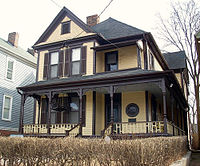 The first level of the house is comprised of a front porch, parlor, study, dining rooms, kitchen, laundry, bedroom and bathroom. The second level includes four bedrooms and a bathroom.