The First African Methodist Episcopal (FAME) Church is the oldest, and one of the largest African American congregations in Los Angeles, California. Bridget (Biddy) Mason founded the church in 1872. As the congergation grew the church moved into a succession of homes: 10th and Georgia; 1st and Main; San Pedro Street; and finally on Azusa Street, its last site before the 8th and South Towne church. The First A.M.E. Church now meets at 2270 South Harvard Avenue in Sugar Hill in a 1968 building designed by Paul R. Williams. 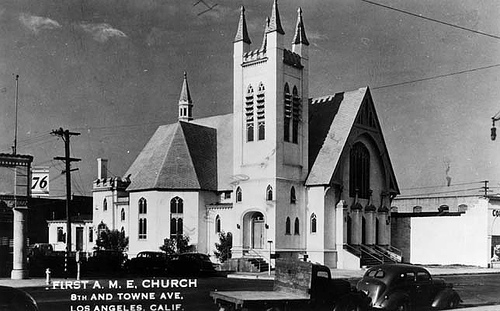 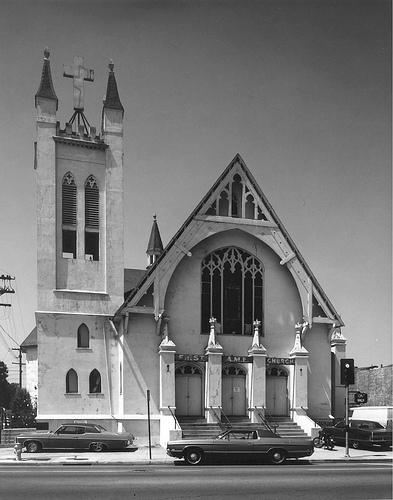 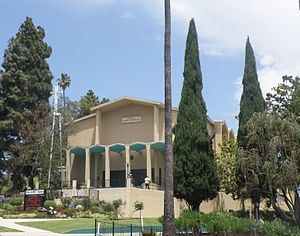 The First African Methodist Episcopal (FAME) Church is the oldest, and one of the largest African American congregations in Los Angeles, California. Bridget (Biddy) Mason founded the church in 1872. Biddy Mason was born a slave on August 15, 1818, probably in Georgia, but maybe Mississippi. After an arduous 1848 journey to the Utah Territory and then to Los Angeles three years later, Biddy and her three daughters were given their freedom in an 1856 court case.

Mason organized the first FAME meeting in her own home. The church had a humble beginning with only twelve people in attendance. The meeting stayed rather small until meetings moved to another member’s home. By the 1880’s the FAME church started becoming more popular, especially with middle class African American families.

The first permanent church building was established in 1903, its gothic style architecture became a landmark in the community. In 1915, the congregation split after an AME bishop removed the Reverend Napoleon P Greggs. Although this was a major setback, the church bounced back with the leadership of Reverend J. Logan Craw.

In the 1960’s the church moved, because the area around the church was becoming industrialized. In 1968, The First A.M.E. Church moved to its current location at 2270 South Harvard Boulevard in Southwest Los Angeles. The number of active members increased drastically under the leadership of Reverend Cecil L. Murray. The active membership of the church as right under 200 members when he first arrived in 1977. By the time he retired in 2004, the church grew to over 18,000 members. During this time, the FAME church was revitalized and placed a greater emphasis on social welfare.

Today, the church has over 19,000 members, and the church continues its social work to this day and it is estimated that the church spends over 2 million dollars each year, supporting over 40 community programs. These programs provide housing and food for the homeless, legal assistance for the poor, and several youth programs.