"The Ingleside Sundial stands within the original circular configuration of where the Ingleside Race Track operated between 1895-1905, a bogus story took root that the monument was an ornament left over from the track's heyday. Many people believed the story, perhaps visualizing that gamblers should quit while their luck still shines." -Hamilton Barrett. 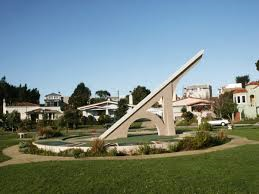 It is speculated, though it cannot be proven, that the Ingleside sundial was the largest sundial in the world when it was created in 1912. The sundial resides in an upper-class housing development created by Urban Realty Improvement Company.

"The secret: On October 10, 1913, fifteen hundred people attended the opening ceremony for this twenty-eight-foot marble and concrete gnomon. It was to become the focal point of its own park and Ingleside Terraces. Oddly, the party for this sun-dependent clock was conducted at night. The timing had various symbolic reasons. That day the Atlantic and Pacific oceans kissed for the first time at the Panama Canal. It celebrated the planned opening of San Francisco's Twin Peaks Tunnel, whose fast, reliable, and clean streetcar line was designed to serve people living away from the downtown area. And it was a romantic setting that would appeal to any young couple considering a new house." - Hamilton Barrett.

The sundial still stands today in the middle of the housing development. There is no plaque surrounding it to give the history, but the links provided give first-hand experiences with the sundial, which give a history.